As the natural gas industry grows, it is also streamlining how energy is produced. Keeping costs down now takes less manpower, which is just good economics.

In the debates over energy markets and climate change policy, people often cite dueling statistics over jobs. Two recent examples concern the different amounts of workers-per-electricity-output across various fuel types, and the impact of greenhouse gas emissions restrictions on American jobs. In both cases, the advocates of government intervention in the energy sector misunderstand the economic rationale of jobs. 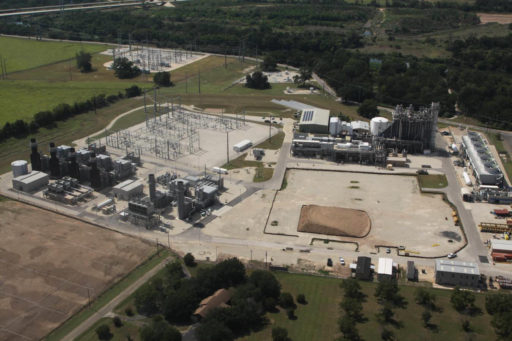 More Energy Per Worker Is a Virtue, Not a Vice

An April 25 New York Times article criticized President Trump’s focus on “coal jobs” by proclaiming that energy jobs would come from solar, not coal. In response, AEI’s Mark Perry wrote a piece for the Washington Examiner (permanently archived at AEI) in which he explained that it’s a good thing to produce a given amount of energy with as few workers as possible. That’s a sign of their productivity.

To illustrate his case, Perry produced this graphic: 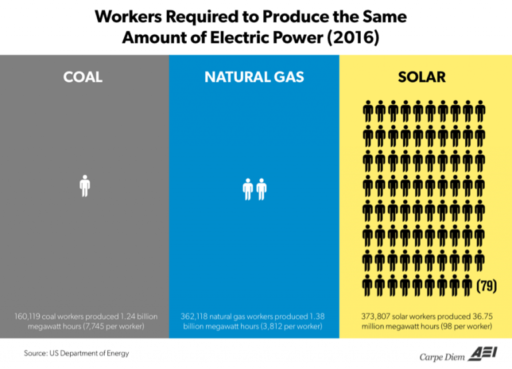 To repeat, Perry was arguing that this reflected well on coal (and natural gas), vis-à-vis solar. Other things equal, it’s the mark of progress if humans can create more and more output from a shrinking pool of workers. For example, that’s what happened in agriculture. (In the two decades following World War II, American employment in agriculture and related fields dropped by half from about 8 million to 4 million.) This is what allowed Americans to continue eating plenty of food while workers were “freed up” to produce other goods and services.

Likewise when it comes to energy. Other things equal, it is a sign of progress if humans can derive more electricity per year from a shrinking pool of workers. It allows us to consume more energy while freeing up workers for other projects.

Now to be fair, some of Perry’s critics argued that his data, though faithfully taken from a DOE report, were misleading since solar involves construction jobs, rather than the long-run number of workers needed to keep already-built plants up and running.

However, on the other hand, there were other critics of Perry who thought they had a real zinger. On social media they began circulating Perry’s chart sarcastically, thinking that it proved the superiority of solar versus coal and natural gas. (I don’t have an example handy, but this tweet makes the same general case, showing that I’m not attacking a strawman.)

Needless to say, these particular critics completely missed Perry’s point. To repeat, it’s better if a given worker can produce more output per year, whether we’re talking about crops, electricity, or trucks. After all, if we want per capita living standards to go up, then it has to be the case that the amount of “stuff” produced per worker keeps rising.

Coal and Natural Gas versus Renewables

One of the big drivers of Perry’s calculations is the fact that coal and natural gas produce so much more output than solar. As IER’s Jordan McGillis pointed out back in April:

What if other sectors of our economy looked this way?

What if McDonald’s employed 43 percent of all burger joint employees nationwide, but could only produce one percent of the burgers needed by a hungry public?

McGillis also anticipated the possible objection that wind and solar are just around the corner from producing huge amounts of electricity. Not so, according to EIA forecasts:

If 2018 is too short a time horizon to dash your hopes for solar productivity, consider EIA’s long-range projections. In its non-Clean Power Plan scenarios even in year 2040—more than two decades from now—all of the sources EIA classifies as renewables (hydroelectric, biomass, wind, solar, etc.), which today combine to make up about 15 percent of our electricity, will still combine to produce only about a quarter of our electricity in 2040.

Here is a chart taken from EIA’s long-range forecast to illustrate McGillis’ text: 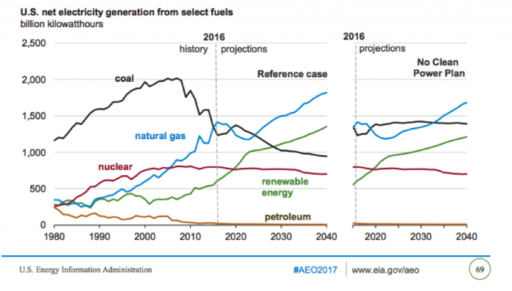 Now what’s interesting is that even as they tout the alleged virtues of green jobs due to government intervention on behalf of wind and solar, many pundits dismiss the warnings about job losses stemming from the US pledge under the Paris Agreement.

However, these types of predictions reflect standard economics; they aren’t right-wing scare tactics as so many allege. To his credit, Dean Baker (who advocates government intervention to mitigate climate change) acknowledges that standard economic models imply that following the Paris Agreement would reduce employment:

[T]he claim that reducing greenhouse gas emissions will lead to job loss…is, in fact, the result that comes from standard economic models that are used all the time to project the impact of regulation policy, tax policy, health care, and trade policy.

These models are all full employment models, which means that everyone who wants to work at the market wage for their skills has a job. The way that reducing greenhouse gases reduces employment is by reducing the real wage. For example, if gas and electricity cost more, and wages have not risen to account for this increase, the real wage will be less. In these models, at a lower real wage fewer people will decide to work.

So, if complying with our Paris commitments causes the real wage to be 1.0 percent lower, then this may lead 0.5 percent fewer people to want to work, which translates into roughly 800,000 fewer people working. (These numbers are hypothetical, not taken from actual models.) [Bold added.]

To repeat, Dean Baker supports government measures to restrict greenhouse gas emissions and disagreed with President Trump’s decision about Paris. Even so, Baker’s intellectual honesty compelled him to dispute the description of the NYT that President Trump was merely relying on “industry-friendly sources” for claims about Paris killing jobs.

Because resources don’t naturally appear in just the way we want to consume them, humans have to work in order to raise their standard of living. Other things equal, the more we can accomplish with a given amount of labor, the better off we are. So when we see that coal and natural gas produce more electricity per worker than occurs in solar, that’s a sign that these former fuels are preferable. There is no prima facie reason for the government to favor solar in the name of “job creation.”

On the other hand, if employment is reduced because of government restrictions on production, then (other things equal) that makes us poorer. After all, those workers would have chosen to give up some of their leisure in exchange for more production, but because of the government restriction they no longer choose to do so. Perhaps (as in the case of climate change) some want to argue that the reduction in conventional living standards is a price worth paying, but let’s not kid ourselves that it’s free.

As these two examples illustrate, when it comes to energy, people often forget what the purpose of jobs is.