Environmental justice is a cruel joke; an exploitation of the poor to advance the special interests of wealthy fractivists in opposing pipeline projects.

Empire Pipeline, the midstream (pipeline) subsidiary of National Fuel Gas Company, filed an application with the Federal Energy Regulatory Commission (FERC) to build two new compressor stations along the Empire Pipeline; one in Tioga County, Pennsylvania, the other in Ontario County, New York. Without building any new pipeline, the addition of these two compressor stations will allow an extra 205,000 dekatherms per day (205 million cubic feet/day) of Pennsylvania Marcellus gas to flow through the Empire Pipeline system. Naturally, Empire State fractivists, who want to energy starve their fellow New Yorkers, oppose this. 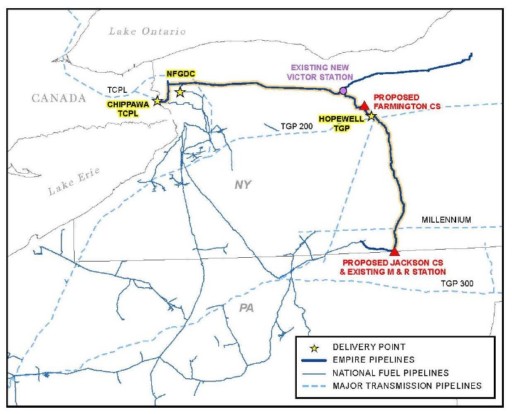 The project, called Empire North Project, will provide much-needed natural gas for Upstate NY and Canada. It will also connect to the Tennessee Gas Pipeline, so who knows? Maybe some Marcellus molecules will find their way into New England too. Anti-fossil fuelers in NY are ramping up to oppose the project.

Nothing new about that, unfortunately. The thing is, the proposed compressor station in Ontario County will have zero (yes, zero) emissions. It will use electricity instead of diesel or natural gas or other fuels–so there’s no smoke stack and absolutely nothing going into the atmosphere. Completely benign.

And yet, because the compressor station will flow more “fracked gas” from Pennsylvania flow through the pipeline, the irrational nut-jobs of fractivism are opposing it.

No. Everyone else has to do those things—not these ignorant, wine-tasting snobs from the Finger Lakes who want to block this emissions-less compressor station. 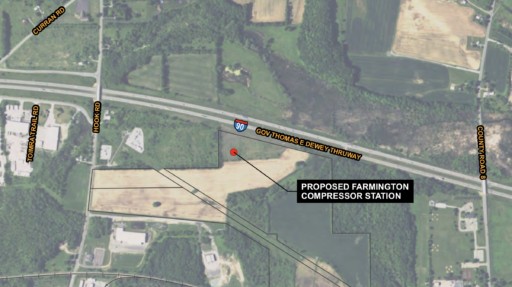 Here are excerpts from two articles on the subject (emphasis added). The first is from the Finger Lakes Times, a fair and balanced “just the facts” kind of article (something rare these days):

The company also is seeking approval for modifications to an existing regulator station off Valentown Road in Victor and an increase in the maximum allowable pressure of the existing Empire Pipeline Inc. Empire North Project from Victor to Corning from 1,290 psig to 1,440 psig.

The project also would include installation of a new, turbine-driven natural gas compression facility in Jackson Township, Tioga County, Pennsylvania, along with minor modifications to the existing Jackson Meter and Regulator Station…

The $141 million project is said by National Fuel to increase the capacity of existing pipeline systems in New York, the Northeast and the North American pipeline grid.

The Farmington compressor station would take up less than 10 acres, with company officials saying it would be designed to minimize impacts of noise, with a vent gas recovery system and no stack emissions.

The company is not seeking any tax breaks for the facility.

The Farmington compressor station is estimated by National Fuel to provide total property tax revenue of $25 million over 10 years. That includes annual tax payments of $1.59 million to the Victor Central School District, $616,900 to Ontario County, $107,700 to the town of Farmington and $17,700 in library tax revenue…

Multiply this by 25 million

Company officials said the development of vast natural gas reserves, including that from hydraulic fracturing in shale formations in Pennsylvania, has “markedly decreased” the average winter heating bills of customers in western New York.

The second article is from the Canandaigua Daily Messenger. The article quotes various quacks like the discredited former Cornell professor Tony Ingraffea:

The $141 million Empire North project that would pump more natural gas from fracking operations in Pennsylvania through the Finger Lakes region has caught the attention of local environmentalists.

Despite the ban, fracked gas is what’s piped through the state and supplies New Yorkers. Concerns center on emissions, oversight and the impact on climate change.

For some, it also presents an ethical issue.

“Yes, we did ban fracking,” said Sue Dazie, a Victor resident involved with environmental causes in the region. “So, why should we allow (natural gas from fracking) through our state? We have already turned it down and now they want us to pay a price through our towns.”

…Any natural gas in New York state is now due to the abundance and cost of natural gas from the Marcellus Shale and Utica Shale that is hydraulically fractured, said Karen Merkel, corporate communications for National Fuel.

“All of our gas is coming from Northeast production,” Merkel said, citing states such as Pennsylvania, Ohio and West Virginia, where fracking takes place. “It is most economical, so 100 percent of what’s transported today across New York state is hydraulically fractured.”

As a result, customers are seeing their lowest cost for natural gas in 20 years, said Merkel…

The Farmington compressor station will be National Fuel’s first in the state run on electricity, using electric motor drives and a vent gas recovery system with no stack emissions.

Farmington Town Supervisor Peter Ingalsbe said the project was well received during an informational session last fall. The new facility will be built on about 10 acres of about 92 acres Empire bought from a private landowner and then put in a major gas line. The location enabling Empire to tap into electricity will make it “a cleaner operation,” the supervisor said. The location will allow for the continued use of growing crops on the majority of the property…

“It goes to the heart of the apparent irony that New York state would say, ‘No shale gas coming out,’ but we’re allowing any amount of shale gas into the state,” said Anthony Ingraffea, an engineer at Cornell University whose work has tied fracking to various environmental ills, including climate change.

His remarks made last December for an NPR, Dec. 8 reporting project, State Impact Pennsylania, echo what others are saying as they keep watch over the natural gas industry in New York.

Notice the funders; the Heinz and Haas families, the latter of which controls both the W William Penn Foundation and the Wyncote Foundation. StateImpactPA is the house organ of Pennsylvania’s ruling gentry class.

Wendy Low is with Rochester People’s Climate Coalition, a non-partisan network of more than 100 organizations working on solutions to climate change. Members includes businesses and faith, civic, labor, and environmental groups. Low, who lives in Rochester and has family in Farmington, said reassurances about the new compressor station in Farmington being a cleaner facility due to its being run on electricity ignores an important aspect — the release of the greenhouse gas methane…

Low, who is also with the group Mothers Out Front, an organization working to ensure a livable climate for future generations, said she and other activists are raising awareness of projects like Empire North. That, in addition to promoting clean, naturally replenished energy resources such as sunlight, wind and geothermal.

Because the proposed compressor station is electric, the state Department of Environmental Conservation does not require the project to receive a DEC air permit. National Fuel does need to file a Notice of Intent to qualify for a DEC general permit for anticipated stormwater discharges during construction activities…

The Southwest Pennsylvania Environmental Health Project recently visited New York to report on the first phase of its New York Environmental Health Study. This study focuses on air exposures and potential health effects resulting from the transmission of natural gas across the state, including through the Finger Lakes region. The study pinpoints specific areas and health risks due to compressor station emissions.

Editor’s Note: The comments made in the second article reveal much, don’t they? First and foremost they reveal the deliberate ignorance of climate change activists who refuse to recognize the U.S. has made more progress in reducing greenhouse gas emissions than any other nation and done so by fracking, allowing the substitution of clean gas for coal. They refuse to recognize this basic undeniable fact because they’re committed to a secular religion, of which climate change activism is now one of the central pillars.

Notice, too, how the activists suggest the towns in which some of them don’t even live will “pay a price” when it’s quite obvious the combination of zero emissions and $25 million in new taxes proves the exact opposite. This a case of elites who don’t need the money or really care about the environment. Rather, they love the virtual signaling opportunity it gives them and the thrill of lecturing locals about what’s good and bad for them, not to mention speaking in their name.

Then, there’s Tony the Tiger, shilling for the Park Foundation and using the Heinz Endowments and William Penn Foundation funded StateImpactPA as an echo chamber to do it. Tony is the perfect gentry class tool, just like the Southwest Pennsylvania Environmental Health Project, also funded by Heinz to do junk science on a grand scale, with one fake study after another.

The suggestion this organization is only interested in helping the natural gas industry “employ the best available control technology to remove particles and thereby reduce exposures,” is beyond ridiculous. They’re committed, like Tony Ingraffea and their funders, to destroying the industry and depriving New Yorkers of natural gas that will keep them warm while lowering their emissions. That’s what they’re paid to do.

3 thoughts on “Empire Pipeline vs. “Stupid Is As Stupid Does” Empire State Fractivism”