[Editor Comment: The Cuomo administration has cooked the books with respect to its baseline emissions inventory, ensuring a future day of reckoning. This is the full story (for now).]

In the summer of 2019 Governor Cuomo and the New York State Legislature passed the Climate Leadership and Community Protection Act (CLCPA) which was described as the most ambitious and comprehensive climate and clean energy legislation in the country when Cuomo signed the legislation.  On August 14 New York State Department of Environmental Conservation (DEC) Commissioner Basil Seggos released proposed regulations to support implementation of the CLCPA.  A key part of this regulation is defining the baseline 1990 emission inventory and this post expands on my initial inventory post and a second post on the emissions report timing by looking at the effect of four key considerations imposed by the CLCPA. 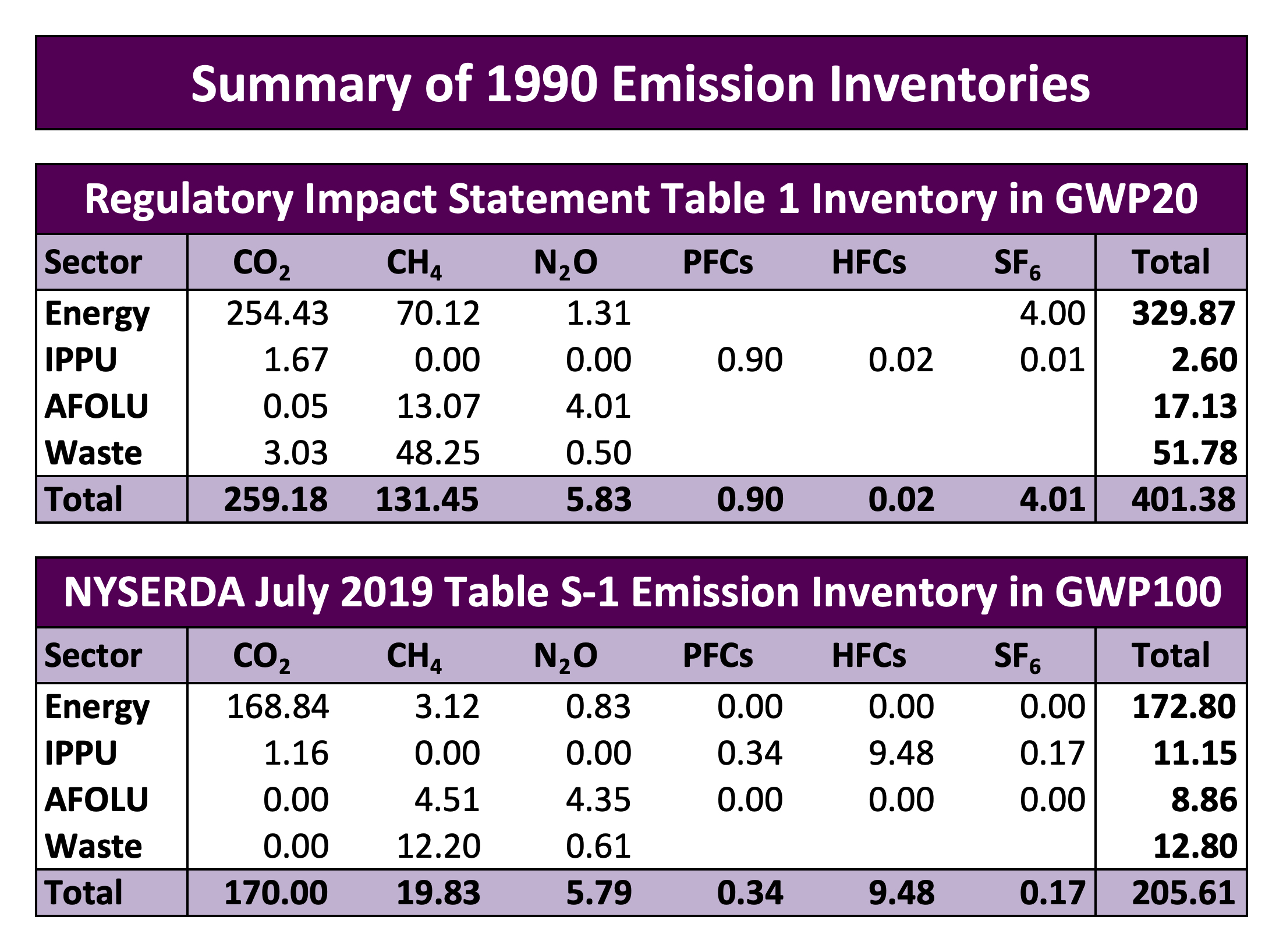 I will address the requirements and the effect on emissions in the following.

“The first requirement is that the greenhouse gases subject to the statewide emission limit include carbon dioxide (CO2), methane (CH4), nitrous oxide (N2O), perfluorocarbons (PFC), hydrofluorocarbons (HFC), and sulfur hexafluoride (SF6). As the CLCPA references the IPCC, the IPCC protocol for national greenhouse gas inventories is used as a foundation for determining which sources of these gases are included in the 1990 baseline. That protocol applies a sectoral inventory, or a categorization of emission sources based on the broad economic sectors of energy, industry, waste, agriculture, and other land use.”

The NYSERDA July 2019 emission inventory included all these parameters so this had no effect on emissions.

According to the RIS:

“The second key requirement of the CLCPA relevant to this proposed rule is that it directs the Department to set greenhouse gases on a common scale using the carbon dioxide equivalence metric (CO2e) and the 20-year Global Warming Potential (GWP20) of each gas, which the Department derived from the IPCC Fifth Assessment Report (AR5). The IPCC protocol requires national governments apply a 100-year Global Warming Potential metric (GWP100) from the IPCC Fourth Assessment Report (AR4),5 and thus other government inventories more frequently utilize the GWP100 metric rather than GWP20 metric set forth in the CLCPA. While Part 496 uses the GWP20 metric derived from AR5, the Department provides an estimate of the 1990 baseline using both metrics below. This is for the purposes of comparing 1990 emission estimates with those of the previous State inventory, the inventory reports of other governments, and other references that use the more standard GWP100 metrics.”

The RIS provides a table with the GWP100 emissions so that a comparison of the two inventories is possible.  As shown below, the difference between the two is almost completely related to changes in methane (CH4) in the energy and waste sectors.  Note that this difference accounts for 46% of the total change in emissions between the proposed regulation and the July 2019 NYSERDA inventory. 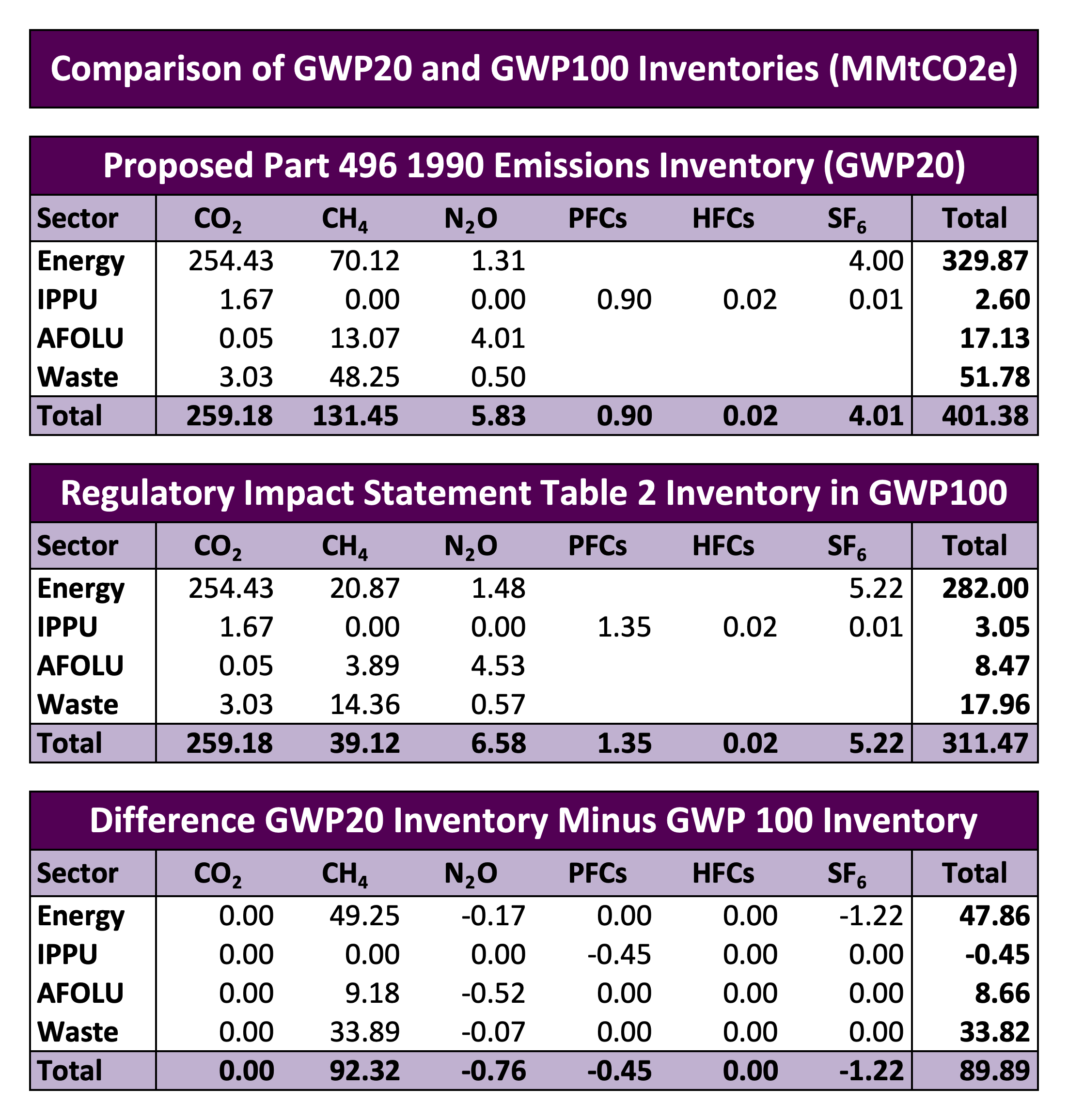 The RIS notes that the “final two key requirements of the CLCPA set New York State apart from other governments in a way that makes it challenging to directly compare the statewide emission limits with the goals from other jurisdictions”.  The question that comes up is was this really necessary and my opinion is that the added burden dealing with this far out-weighs any benefits or needs.

The RIS explains that in the third requirement:

“The CLCPA establishes that the statewide emission limit, and therein the emission reduction requirements of the CLCPA, include certain emission sources that are located outside of the State borders. As mentioned above, ECL § 75-0101(13) defines statewide greenhouse gas emissions as including emissions associated with imported electricity and fossil fuels. The IPCC protocol for national governments do not include similar requirements to incorporate emissions produced outside of the relevant jurisdiction associated with energy imported into the jurisdiction. If comparing the 1990 baseline to other jurisdictions’ emission reports, the imported fuels and electricity sectors should be excluded. However, the statutory emission reduction requirements of the CLCPA include these sectors.”

The RIS describes the final key component: “The fourth and final key component of the CLCPA for purposes of this rulemaking is that the 100 percent net emission reduction goal, or a goal of attaining net zero emissions, is not part of the Legislature’s direction to the Department for promulgating the statewide emission limits. The directives to reduce statewide greenhouse gas emissions (1) 40 percent from 1990 levels by 2030, and (2) 85 percent from 1990 levels by 2050 (40×30 and 85×50) are set forth in ECL § 75-0107, which further directs the Department to establish these statewide greenhouse gas limits as a percentage of estimated 1990 emissions.”

DEC concludes that, to meet this requirement, it is necessary to “establish regulatory limits based on a percentage of gross 1990 emissions as opposed to net emissions”.  The inventory includes anthropogenic CO2 emissions resulting from the combustion of biomass and biofuels in the 1990 baseline but notes that this assumption may have to be adjusted.  For waste emissions, the Department proposes a separate approach to the issue of accounting for gross and net emissions and a separate approach for anthropogenic versus non-anthropogenic emissions.

The following table shows the differences between the proposed emissions inventory and the July 2019 NYSERDA inventory as a function of the upstream out-of-state emissions, the gross vs. net adjustment for waste emissions and the adjustment for anthropogenic CO2 emissions resulting from the combustion of biomass and biofuels.  The waste emissions adjustment is 5.15 MMtCO2e but I cannot differentiate exactly how much is due to either remaining factor.  However, I believe that because biomass burning is a relatively small component of overall emissions most of the approximate 100 MMtCO2e difference is due to upstream added emissions. 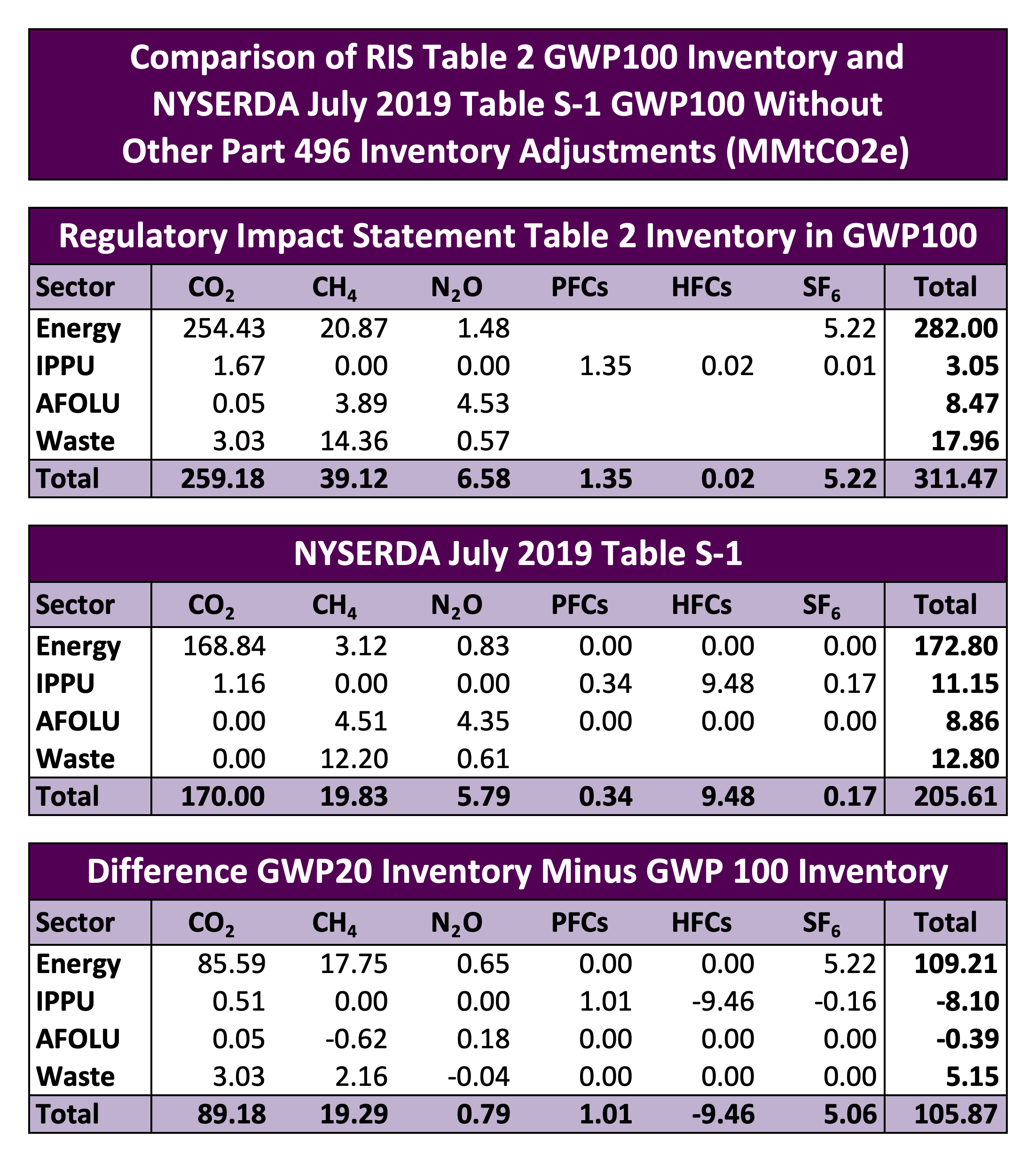 The CLCPA also mandates specific requirements for the 1990 emission inventory that I am sure very few, if any, politicians who voted for the law understood.  The previous NYSERDA GHG inventory followed Intergovernmental Panel on Climate Change (IPCC) guidance for developing an emissions inventory.  Why wasn’t that good enough?  Instead, the law includes specific language that requires the development of a revised inventory that has to rely on some speculative assumptions for some sectors, is inconsistent with everyone else making comparisons difficult, and leads to almost a doubling of emissions in the baseline year of 1990.

One of the mandates specified that the global warming potential (GWP) had to be calculated over a 20-year time horizon.  The IPCC describes time horizons and the GWP[1] notes (emphasis added):

“The GWP has become the default metric for transferring emissions of different gases to a common scale; often called ‘CO2 equivalent emis­sions’ (e.g., Shine, 2009). It has usually been integrated over 20, 100 or 500 years consistent with Houghton et al. (1990). Note, however that Houghton et al. presented these time horizons as ‘candidates for discussion [that] should not be considered as having any special sig­nificance’. The GWP for a time horizon of 100 years was later adopted as a metric to implement the multi-gas approach embedded in the United Nations Framework Convention on Climate Change (UNFCCC) and made operational in the 1997 Kyoto Protocol. The choice of time horizon has a strong effect on the GWP values — and thus also on the calculated contributions of CO2 equivalent emissions by component, sector or nation. There is no scientific argument for selecting 100 years compared with other choices (Fuglestvedt et al., 2003; Shine, 2009). The choice of time horizon is a value judgement because it depends on the relative weight assigned to effects at different times.”

This boils down to the conclusion that the authors of this section of the CLCPA imposed their value judgements upon the state.

The other mandate that makes this inventory unique is the requirement to include upstream out-of-state emissions.  The IPCC protocol for national governments do not include similar requirements to incorporate emissions produced outside of the relevant jurisdiction associated with energy imported into the jurisdiction.  There is no question that this requirement was deliberately included.

The 1990 GHG emission inventory proposed in DEC’s proposed Part 496, statewide emission limits had to establish a statewide greenhouse gas emissions limit as a percentage of 1990 emissions no later than one year after the effective date of the CLCPA.  As noted previously that deadline forced DEC to release the document with much less than the “best available” documentation required in the law.

The two primary drivers for the doubling of the emissions inventory both add a little under 100 MMtCO2e to the 1990 inventory.  As I noted, it is not obvious why the authors of the law included those requirements that they had to know would increase the 1990 baseline.  On one hand a higher baseline may mean that the politicians can more easily claim victory for the interim target in 2030.  On the other hand, making the inventory more expansive by adding upstream requirements and two other smaller impact mandates makes compliance harder.  Couple that with the global warming potential specification that increases methane emissions I suspect that the authors tried to use the law to make the use of out-of-state natural gas impossible sooner rather than later.

I believe it is only a matter of time until economic reality slams into the CLCPA.  New York’s war on natural gas is a war on the most economical fuel that has been responsible for the vast majority of CO2 reductions observed to date.  When these policies require the use of more expensive fuels the inevitable result will be significant price increases on energy costs that are already among the highest in the country.  When the Cuomo Administration can no longer hide those cost increases in utility rate cases, hidden fees, or programs that are taxes in all but name, the reckoning will come.

Reposted from the Pragmatic Environmentalist of New York blog, the publisher of which has given permission to use this.

1 thought on “Emissions Games: The Full Story on How New York Is Cooking the Books”