Dimock plaintiff Monica Ely exposed the entire hollowness of the fractivist campaign yesterday in court when she made a claim easily rebutted by a photo.

Last Friday, I wrote about the case of Nolen Scott Ely vs. Cabot Oil & Gas and a pre-trial decision one week earlier, by United States Magistrate Judge Martin C. Carlson, to exclude late-filed exhibits from use in the trial. Carslon, a normally good-humored and unfailingly polite judge, delivered a scathing explanation of why he wouldn’t allow a last minute shovel of crap to be thrown against the wall of his courtroom by the plaintiffs. He called it a “a sad and shocking spectacle, a debacle and dilemma which is entirely of the plaintiffs’ own making,” saying it was an “extraordinary, unprecedented, unexplained and profoundly troubling development” and noting that “In a career spanning 36 years as a federal district court litigator and judge, [he had] never observed a wholesale discovery default of this scope and dimension.”

Yesterday, I attended part of the trial itself and was reminded of something else Judge Carlson said in his decision when he told the Ely attorneys “gamesmanship, ambush, surprise, and concealment have no place in federal practice,” because a few hours of testimony revealed that’s all the plaintiffs have. 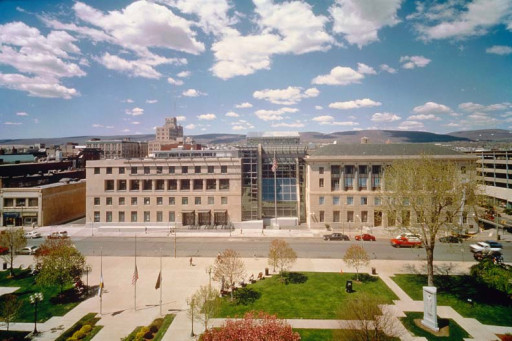 Federal Courthouse in Scranton where Ely trial is taking place

Monica Ely, wife of Nolen Scott Ely and one of the plaintiffs in this last of the Dimock cases, was cross-examined by Cabot Attorney Amy Barrette yesterday afternoon and it was sad beyond belief. Ely had earlier made numerous muddled claims about her water being harmed by Cabot’s drilling activities. She had zero evidence other than a series of vague claims contrasted by conflicting statement she had made under oath in depositions taken much earlier in the case.

Indeed, one of the startling facts quickly becoming apparent during the cross-examination was that her attorney (previously sanctioned Leslie Lewis) seemingly never advised Ely she ought to re-read the transcipts of her depositions before testifying so as to keep her stories straight. Over and over again, she was made to confront the fact she said one thing then and another thing now. It was one of those rare times when it was hard not to be embarrassed for your opponent.

Nothing could have been more embarrassing though than when Monica Ely told the jurors “I’m not against anything; I just want clean water,” only to be confronted with photos of her and her family standing on the steps of the New York State Capitol Building in Albany with actor and Little Green Bully Mark Ruffalo at a fracking protest rally. Here’s a snippet video from the event at the point where Ruffalo introduces the Ely family:

Notice the “Ban Fracking Now” posters and how the Ely children are used as props for what the Times-Herald Record described as “an anti-fracking rally on the sandstone-and-marble steps of the Capitol building that attracted a media-heavy crowd of about 200.” The event was organized by New Yorkers Against Fracking and specifically promoted as “a rally” and benefit concert. Why is this important? Because Monica Ely, during her cross-examination and redirect, contended she tried to “never involve her children in the water dispute” and had absolutely never attended any “rallies.” When confronted with the photos of her and her family at what was advertised as and obviously was a rally, she quickly dissembled into claiming it was “only a fund-raiser.”

That’s how the afternoon went as Ely kept making excuses for saying different things at different times or, more often, resorting to “I don’t remember” or questions back to the attorneys, which got so bad that the judge had to admonish her multiple times to simply answer the question and not attempt to engage in a conversation. Generally speaking, it was, in a word, pitiful. She was unprepared. Her attorney was unprepared. They had nothing. And so it went, only to be interrupted by Judge Carlson having to tell late arrivals Vera Scroggins and Craig Stevens they couldn’t be taking video or photos, which, of course, is a violation of Federal law, not that this mattered to either of them though they said they understood.

It was interesting, though, that Vera and Craig didn’t show up until late in the day after having seen Scott Ely eviscerated on the stand the day before and Craig Stevens prevented from bringing his schtick jug of supposed Dimock water into the courthouse. You can read about the second part in this heavily slanted StateImpactPA story, but don’t be shocked by how this Heinz and Haas financed fractivist outlet covers things. Thats what they’re paid to do, after all. The first part is related in a Scranton Times-Tribune story that included the following (emphasis added):

Mr. Ely said he first became concerned about his water in January 2009, when his children developed unexplained rashes and headaches. He had his water tested and discovered high levels of methane.

Under cross examination by Ms. Barrette, Mr. Ely acknowledged he authored a handwritten note to his attorneys in which he said he first noticed problems with his water in August 2008. The water, he said, smelled like rotten eggs and “was really bubbly.”

That date is key to Cabot’s defense as the company did not begin drilling the wells in question until September or October of 2008, Mr. Dillard said.

Mr. Ely testified he refused the system because his uncle, who owns property near him, accepted the unit from Cabot and it did not work. His uncle’s water quality is still so poor that he now pumps water from his pond for home use, Mr. Ely said.

Under cross examination, Mr. Ely acknowledged he refused Cabot’s offer for a treatment system before his uncle’s system was even installed, however.

Keeping stories straight is clearly difficult for Scott and Monica Ely who desperately want to make the case about fracking for which they acknowledge they have no evidence, as Phelim McAleer poignantly observed in one of his posts.

Monica, in particular, simply wants to believe there’s a problem where there is none, as was made explicitly clear by her testmony yesterday and in previous depositions to which the testimony referred. Incredibly, she stated she wouldn’t drink the water even if it was determined it was fine and the EPA said it was safe. She was asked about it several times and maintained that position while acknowledging it was “psychological.”

This was, perhaps, the defining moment of the day, the point at which the plaintiffs admitted they had nothing but were sticking to it. It was an affirmation, if you will, that they won’t accept the truth because they prefer to believe a lie. They argue the water is unsafe because they believe clean water is dirty. They argue the rally where they let Mark Ruffalo use their children as props wasn’t a rally because they prefer to believe it was only a fund-raiser even though it was advertised as a rally. They argue they’re not against anything and only want clean water while willing making themselves part of a chanting mob holding signs to “Ban Fracking Now.” Such is “psychological” problem with fractivism. Just as Judge Carlson noted about the 11th hour attempt to manufacture evidence that doesn’t exist, it is “a sad and shocking spectacle.”

20 thoughts on “Ely: “I’m Not Against Anything…But Ban Fracking””