Electric transmission by train may be coming soon if Alternative Transmission Inc.’s plan to move stored electricity by containers rail cars is accepted.

It’s no joke. Electric transmission by train could well be coming soon. It all depends on whether or Alternative Transmission Inc. (ATI) gets a FERC order recognizing it as a utility. This order would, If granted, allow ATI to participate in competitive auctions to supply the electricity needs of grid operators. S&P Global Market Intelligence has a story on ATI’s plans. They offer an intriguing glimpse into the future of energy storage, a future that has a lot to do with natural gas. 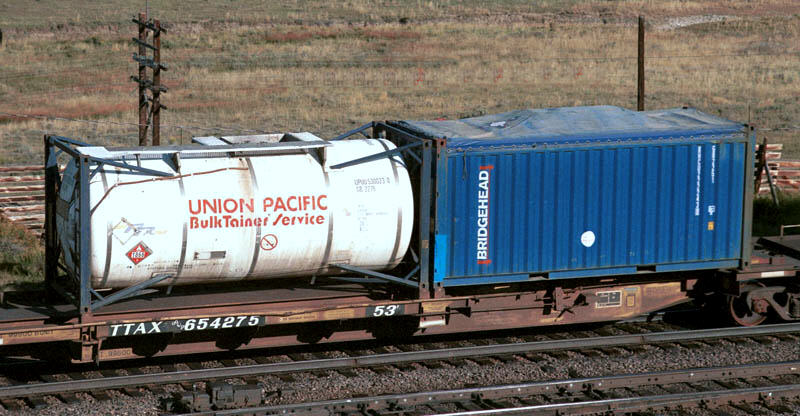 Is this how electricity will be transported from the gas fields of Pennsylvania to New York in the future?

Here is how ATI describes what it wants to do:

ATI proposes to own or operate facilities that will transmit electric energy in interstate commerce. It will do so without use of transmission wires or wire corridors. The transmission described in this Petition represents a new paradigm. For over 80 years this Commission has exercised its FPA transmission jurisdiction over transmission wires…

The alternative transmission proposed in this Petition involves construction of electric energy transfer stations—charging and discharging—at locations in the continental United States. At the charging stations electric energy generated by unaffiliated others will be transferred to a mobile medium—e.g., a shippable container of an electrically chargeable, dischargeable, and rechargeable medium.

The charged mobile medium then will be transported across state lines by rail (and possibly tractor-trailer, boat or airplane, or any combination of these) to discharging stations at different locations. At the discharging station the medium in the containers will be available for instantaneous dispatch as instructed, until the charge is depleted, and the medium becomes available for recharge…

For example, considerable reserves of domestic shale natural gas cannot reach energy markets in the form of natural gas because there is not adequate pipeline capacity. By diverting this natural gas directly to combustion turbines or combined-cycle generating units constructed at or proximate to the production of those natural gas reserves, that generation could be used to electrically charge the media in container cars for transport to markets using neither pipelines nor wire corridors.

This idea, if accepted by FERC, has big implications for renewables, but, yet again, much more so for natural gas. I commented and offered the following explanation:

Rail can also be economical for delivering the electricity while simultaneously minimizing environmental impacts associated with the siting and construction of new or expanded electric transmission lines, which are substantial in places such as the Northeast where building new power lines is next to impossible both logistically and politically.

Rail offers way to reach constrained or otherwise under-served markets with additional electricity for purposes of rapidly dealing with peak demands, for example. It also offers a form of relief during times of emergency.

And, again for places such as New York, where there is strong political opposition to new natural gas power plants, it offers a way to ship electricity produced at a Pennsylvania natural gas power plant into New York without getting into building other power lines or power plants. It is a practical approach to energy storage while avoiding the overloading of the grid.

Therefore, allowing new and innovative delivery systems, such as Alternative Transmission Inc. proposes, to compete on a level playing field with traditional wire solutions would resolve several energy issues at once and help deliver electricity to areas needing it, using existing rail infrastructure.

And, if you think this is all crazy talk, consider what Andrew L. Ott, President and CEO of PJM Interconnection told a U.S. Senate Committee on Energy and Natural Resources two days ago:

We look to policymakers to work with us on the various regulatory principles that would guide incorporation of energy storage resources as rate-based transmission assets. Energy storage resources could, in certain circumstances, be deployed more cost-effectively than building new transmission lines while avoiding the more complicated land-use and permitting issues associated with building a new greenfield transmission line. But there remain details to work through, including whether and how such resources can participate fairly in the markets when they are not being called upon to address a particular transmission constraint, how RTOs can assess the resilience of an energy storage resource co-located at an existing substation when compared with the development of a new alternative transmission line that could reduce the risk of a single point of failure, the cost allocation of such facilities, and myriad other issues. As we see increased interest from PJM transmission owners and merchant developers in this area, PJM is committed to working through these issues with our stakeholders, the states and FERC.

Utility folks in the Northeast always tend to talk in circles using the language of political correctness, but this one isn’t so hard to figure out. Andrew Ott is saying it’s impossible to get anything done in places such as New York, so moving in electricity via other means (e.g., railcar container storage) could solve the problem. And, although he later talks about this in the context of solar for the sake of political cover , we know the only way to efficiently charge the batteries is in bulk at natural gas fired power stations that just happen to be often located near rail lines near the gas fields.

4 thoughts on “Electric Transmission by Train? A Mobile Option for Gas Fired Electricity?”