Electric cars are the new politically correct response to fossil fuels, but do they make sense on a large-scale? And, don’t they just use converted fuel?

According to a new study by Wood Mackenzie, Americans should be cautious about electric vehicles (EVs) and their rate of adoption into the marketplace because they can be disruptive to the electric grid.

Because electric cars have less driving range on a charge than the equivalent gasoline-powered vehicle has on a tank of gas, their batteries must be recharged fairly frequently. A recent study found that simultaneous charging of just 60,000 electric vehicles could threaten the Texas grid. Based on a 100-kilowatt EV battery with a five-minute charge time, which could potentially be the standard for EVs in three or four years according to Wood Mackenzie, demand from 60,000 cars charging at once would equate to 70 gigawatts; this is equal to the current peak demand of the Electric Reliability Council of Texas (ERCOT).

Electric cars are not really zero emissions at all, of course, as the electric is typically generated by combusting natural gas, but they do reduce emissions. Can they grid handle them, though? Would CNG vehicles be smarter?

This scenario is highly unlikely, however, because most EV owners charge their cars at night when there is surplus power on the grid, because a five-minute charge time would mean a breakthrough in battery technology and because the percentage of EVs in Texas and worldwide is currently very low.

The Texas Department of Motor Vehicles registers 24 million vehicles a year. If electric vehicles reach 60,000, they would amount to just 0.25 percent of the registrations. According to the report, however, that small percentage could wreak havoc on the Texas grid if battery technology improves to a five-minute charge time and all the EVs seek to charge their vehicles at once (also unlikely).

The math goes as follows: at current charging rates, a 100-kilowatt battery would charge in an hour and the instantaneous demand would be 100 kilowatts. If, however, EV manufacturers reach their goal of rapid charging and a 100-kilowatt battery gets charged in five minutes, it would result in an instantaneous demand of 1.2 megawatts. Thus, 60,000 EVs charged at once would require 72 gigawatts of power—about the current peak demand of ERCOT.

Again, this is currently not a problem because EV owners generally charge their cars at night when there is surplus power. Additionally, should EV sales take off in the future, utilities could offer incentives for EV owners to charge their batteries at night or whenever there is excess power.

In 2016, 86 million new cars were sold worldwide, of which EVs comprised 2 million. China leads EV sales, followed by Europe and the United States. Wood Mackenzie forecasts that there will be 125 million electric vehicles adopted by 2035, displacing 1.8 million barrels per day of oil demand and adding 350 terawatt-hours to power demand.

As Wood Mackenzie notes, this growth in EVs puts various pressures on battery suppliers, utilities and oil companies. Capacity for EV battery production in 2020 is expected to be 268 gigawatts, which is much higher than the 2020 demand that is expected at 100 gigawatts. After 2028, however, Wood Mackenzie expects battery demand to exceed manufacturing capacity, and by 2035 battery production would need to triple to meet expected demand. (See graph below.) 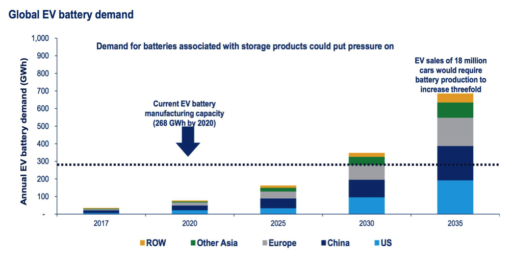 The impact on global power markets would be negligible as those 125 million cars will likely add 350 terawatt-hours of power demand, which is only one percent of the global power market. But, if the vehicles were concentrated in a few areas such as in the Silicon Valley, it could have a more disruptive effect on the power grid, as in the example with ERCOT noted above. 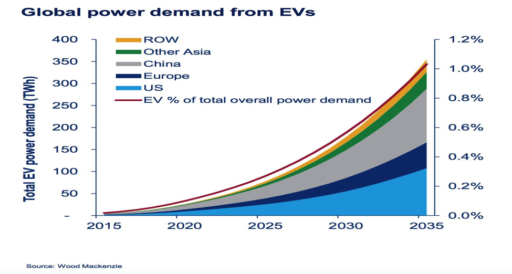 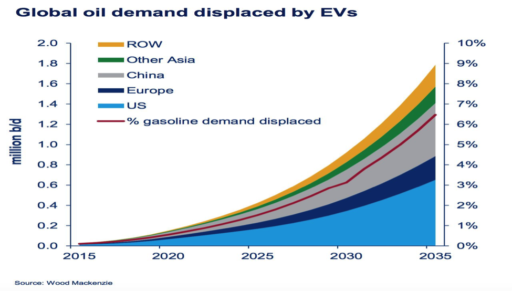 While some countries such as Norway are seeing a large demand for electric vehicles driven by government policies such as tax incentives, free parking and tolls, free charging and other benefits, others are slow to make the change. Due to this inconsistent demand for electric cars, it is not clear how quickly electric vehicles will make a dent in the auto marketplace. However, Wood Mackenzie is warning us that these changes could be disruptive if concentrated in small areas and that we should be careful to recognize this in incorporating changes in the energy system.

Editor’s Note: While electric cars may displace some gasoline as a source of energy, the electric power itself is converted energy likely to come from natural gas these days; natural gas produced by the combination of horizontal drilling and hydraulic fracturing. Obviously, some of it will come from coal, nuclear and renewables as well, but there’s nothing about electric cars that is inherently cleaner in the bottom line calculation with respect to emissions. They simply shift energy around and, in most cases, open up the potential for more natural gas use, which is a good thing excepting that it would be nice to eliminate the middleman and go straight to CNG vehicles, which would be less disruptive to the grid. Either way, though, natural gas is critical to the real solution to reducing emissions and either way natural gas will play a more central role.

2 thoughts on “Are Electric Cars Really the Answer? Or, Another Problem?”