Fracking misreporting takes place everyday by advocates pretending to be independent journalists, but Nature.com has taken things to a new level says the EIA.

We spend a lot of time correcting fracking misreporting but It’s truly rare for a Federal agency to do so, especially one as professionally neutral as the Energy Information Administration (EIA). Nature.com has managed to make it happen, however, with some of the worst distortions imaginable.

We love the EIA, not because they take our side but precisely because they take no side. They simply collect and distribute data without suggesting policy. Nature.com, by contrast, has long pretended to be neutral but has repeatedly revealed its biases with one bit of fracking misreporting after another. It came out with a piece last month that was too much even for the normally green eye-shaded folks at EIA. Titled as Natural Gas: The Fracking Fallacy, their report was premised on this obviously tilted statement:

“The United States is banking on decades of abundant natural gas to power its economic resurgence. That may be wishful thinking.”

Nature.com effectively challenged the EIA’s integrity, leading to a three-page detailed response from the EIA’s Deputy Director which is must reading for anyone wanting a glimpse of how the fourth estate manipulates public perceptions to impact government policy. Here is some of the EIA offered (emphasis added):

The December 4 news feature “The Fracking Fallacy” (Nature, Volume 516, pages 28-30) and a related editorial (Nature, Volume 516, page 7) focus on an imagined “battle of forecasts” of shale gas production developed by the U.S. Energy Information Administration (EIA) and the Bureau of Economic Geology at the University of Texas at Austin (BEG/UT). The article badly misconstrues the actual relationship between EIA and BEG/UT research efforts, which are complementary rather than competitive. It also provides a very misleading view of this very important subject matter to readers of Nature, most of who will lack field-specific knowledge and rely on the Nature brand to assure they are getting accurate reporting in an appropriate context…

In addition to repeatedly misconstruing EIA’s Reference case projection as a forecast, the article is filled with inaccurate and distorted reporting. For example, the figure in the “Battle of the Forecasts” box shows a year 2030 value for EIA about 130 to 140 billion cubic meters above the value shown for “UT total of 4 plays” and about the same amount below the two industry analyst estimates shown. It is unclear how the same gap represents a battle between BEG/UT and EIA projections while industry forecasts are characterized as “generally falling in the neighborhood of the EIA assessment.” It is also unlikely that readers will understand that the line for the BEG/UT scenario that is presented in the same figure is not actually derived from the published papers cited in the article, but reflects the work of the reporter based on his interpretation of ongoing work-in-progress.

The article relies heavily on Professor Patzek in describing the work of the BEG/UT team and its implications. He is quoted 6 times, including a statement that “we’re setting ourselves up for a fiasco” that Nature presents in giant typeface on the third page of the article. From our interactions with the BEG/UT team; we understand that Patzek, who is listed as an author of only one of the five BEG/UT papers included in the references, has a relatively small role in the BEG/UT project funded by the Sloan Foundation featured in the article. Towards the end of the article, there is a brief mention of (Scott) Tinker, identified as another member of the BEG/UT team, who is described as having argued “that the team’s estimates are conservative, so actual production could turn out to be higher.” Professor Tinker and Dr. Svetlana lkonnikova, who is not quoted in the article, are actually the two co-Principal Investigators on the Sloan-funded BEG/UT project. Given the presentation in Nature,  I doubt that readers would understand the relative roles of Patzek and Tinker, who clearly have different perspectives, in the BEG/UT work being discussed.

Since opinions expressed on the availability of shale gas in the article may reflect views beyond the specific content of the BEG/UT and EIA studies that are its focus, it might also be appropriate for the article to inform readers that Patzek is a leading figure in the peak oil community, which emphasizes concerns related to limitations on the availability of hydrocarbon resources. Patzek’s personal website (gaia.pge.utexas.edu) notes that he currently serves as President of the Association for the Study of Peak Oil.

EIA would expect a journal of Nature’s reputation to adopt a scientific approach to journalism, pursuing information and having the story follow where the information leads, rather than selectively collecting information and sources to fill what appears to be a dramatized story line built around the journalistic device of a (false) conflict meme…

While recognizing that different standards apply to editorial opinions and news features, the article and the accompanying editorial (The Uncertain Dash for Gas) appear to function as an integrated newsatorial. The editorial portion of this duet makes some very sweeping assertions that merit close scrutiny. For example, it laments the fact that governments and companies wager billions of dollars on dubious bets (on shale gas). But what exactly should industry be doing to meet energy needs?

Righteous anger can be a beautiful thing, especially when its exercised by the sort of people who more typically get their kicks out of Excel worksheets than speeches. What is revealed by the whole episode is the political corruption that has invaded both journalism and science in recent years. Not telling its readers that Professor Tad Patzek was President of the Association for the Study of Peak Oil, the sort of guy the Park Foundation funded Truth-Out blog uses to push its agenda, is unforgivable. 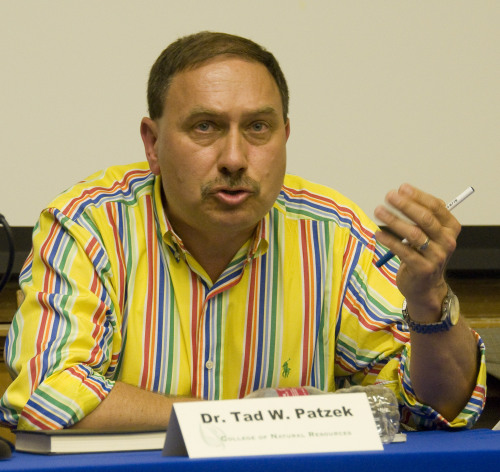 Nature has its own agenda and it’s political, a fact the public cannot appreciate without someone with the guts to speak up and tell the world the expert relied upon to generate the headline was not only a peak oil nutty professor, but also a bit player in the whole drama. Thank God the folks at EIA did so and let the truth be told.

That’s one piece of fracking misreporting now corrected. Huzzahs all around!

5 thoughts on “EIA Takes on Nature for Fracking Misreporting”