DRBC members: A study by PA’s DCNR and DEP concludes there are NO quantifiable relationships and NO definitive conclusions of fracking impacts on water.

A brand new study published in the peer-reviewed Proceedings of the National Academy of Sciences (PNAS) looked at 25 small watersheds over the course of 2 years in northeastern Pennsylvania, looking for any possible correlation between fracking and local streams. Know what they found? There is NO impact from fracking on local streams. NONE. Those who worked on the study include researchers from the US Geological Survey, the Pennsylvania Dept. of Environmental Protection (DEP), and the Pennsylvania Dept. of Conservation and Natural Resources (DCNR). 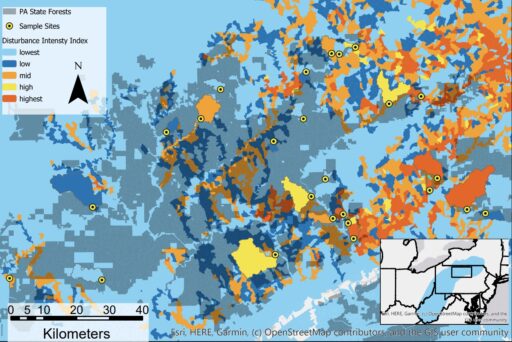 This objective, scientific study obliterates the lies and smears and allegations by the Big Green lobby that fracking pollutes groundwater supplies–in particular that fracking somehow affects streams and rivers.

The study sampled headwater streams seasonally over two consecutive years. It yielded “no statistically significant relationships” between the intensity, presence, or absence of shale gas development and any signal in a comprehensive set of chemical constituents (including those recognized as oil and gas geochemical tracers) or “any changes in microbial or benthic macroinvertebrate community composition.” Translation: NO IMPACTS.

A new federal study failed to find evidence that oil and gas production in northern Pennsylvania has contaminated the commonwealth’s forest rivers and streams, providing a timely counterweight to the vows to ban fracking being made by some Democratic presidential candidates.

The study, which was published Feb. 3 in the Proceedings of the National Academy of Sciences (PNAS), one of the world’s most prestigious scientific journals, concluded that there were no signs that chemicals or wastewater from fracking wells had entered more than two dozen streams running through the gas fields of the Marcellus Shale formation. There was also no evidence found that fracking had significantly altered the volume and makeup of the microscopic creatures in the water or had changed the chemical composition of the water itself.

“No quantifiable relationships were identified between the intensity of oil-and-gas development, water composition, and the composition of benthic macroinvertebrate and microbial communities,” the study said. “No definitive indications that hydraulic fracturing fluid, flowback water, or produced water have entered any of the study streams were found.”

Rebecca Oyler, the Pennsylvania Legislative Director for the National Federation of Independent Business, told Pennsylvania Business Report that the study shows that fracking can provide affordable energy for the state’s economy without significant environmental risk. “The study just released by PNAS confirms what we’ve known all along,” she said, “that the responsible development of Pennsylvania’s natural gas resources is not incompatible with protecting our environment.”

The results were also welcome news for an industry that has benefited greatly from the use of fracking to crack open deposits of natural gas and oil, but now finds the practice in the cross-hairs of more than one presidential candidate. U.S. Sen. Bernie Sanders (I-VT) has an immediate nationwide ban on the practice included in his energy platform while U.S. Sen. Elizabeth Warren (D-MA) doesn’t mention fracking specifically in her proposals, but would set a goal of 100 percent “clean” energy, presumably without gas and oil.

While the other candidates have been less aggressive on limiting fracking, the potential for tighter restrictions has prompted industry associations to issue sober reminders that much is riding on the continuation of fracking.

The U.S. Chamber of Commerce recently released a report predicting that Pennsylvania could see 609,000 jobs in the oil and gas sector disappear by 2025 should fracking be outlawed while gasoline and natural gas bills for consumers would double at the very least. “The impact of an overall (fracking) ban on household income is mainly caused by the extra energy costs incurred by consumers and businesses,” said the report, part of the Chamber’s Energy Accountability Series. “We project that households in Pennsylvania will experience a collective loss in income of $114 billion by 2025.”

While arguments in favor of a fracking ban also focus on slowing climate change, the study of the Pennsylvania streams appeared to allay fears that the process directly causes water pollution and the degradation of ecosystems. The study was led by the U.S. Geological Survey and partially funded by the Pennsylvania Department of Environmental Protection, the agency that inspects oil and gas production in the state forest system. It monitored the waters in 25 rural streams on State Forest Service lands located in the Marcellus region. Human activity there is considered minimal, but there have been around 500 wells drilled in the areas since 2008.

The research team collected water samples from the “headwater” streams over a two-year period. The samples were analyzed for populations of microscopic creatures and for various chemicals known to make up the salty brine that gurgles up through the fracking well to the surface. That “production water” has escaped into waterways through accidental spills; however, the study concluded that there were no indications that the brine or the fracking chemicals themselves were creating problems on a regional basis. In fact, the highest levels of chloride turned up in State Run, which the authors said has no oil and gas production located on its watershed, but does have higher densities of roads and housing.

The Department of Conservation and Natural Resources told Pennsylvania Business Report that the findings confirmed the current management practices in the state forests were doing the job. “We feel that the existing setbacks in commonwealth leases as recommended in the “Guidelines for Administering Oil and Gas Activity on State Forest Lands” are effective and currently exceed regulatory requirements,” the agency said in a written statement.

Moreover, any changes in the permitting process for new wells should be balanced against rising drilling costs, Oyler said. “We haven’t heard any proposed changes to the regulations impacting the oil-and-gas industry as a result of this study, but should they be considered in the future, we’d ask that they be examined in the context of effectiveness and what regulatory restrictions come at a high cost, but have little impact,” she said.

Editor’s Note: So, Tom Wolf is a member of the DRBC. He’s also the member who has been pushing a fracking ban at the DRBC. And, he’s ignored what his own administration has told him about fracking and water quality in the SRBC region so he can appease special interests who want to ban fracking in the DRBC region. Now, it turns out members of his administration (DCNR and DEP staff) have also participated in a major study that concludes the following:

This study hypothesized the existence of a quantifiable relationship between the intensity of disturbance from Marcellus Shale gas development and changes in water chemistry, microbial community structure, and macroinvertebrate community composition in headwater streams in the PASF system. No quantifiable relationships were identified between the intensity of OG development, water composition, and the composition of benthic macroinvertebrate and microbial communities. No definitive indications that hydraulic fracturing fluid, flowback water, or produced water have entered any of the study streams were found.

What is Tom Wolf, the doofus trust-funder on whom DRBC special interests have relied as a sacrificial lamb, going to do now? He sold out Wayne County at the DRBC in hopes of placating Heinz and Haas family interests and now his own people tell him there’s no damn case for what he said and what he did. Well, he can take it back to the DRBC; that’s what he can do.