Landgate, a service offered by the Rice brothers, helps discern the value of mineral rights and it shows how much the DRBC taking is worth.

Our good friend and invaluable resource, Jim Willis, of Marcellus Drilling News has a fascinating post up today about something called Landgate. It’s exciting in its own right as a tool to help landowners evaluate the worth of their oil and gas rights, but it has an additional value for those of us trapped in the DRBC spiderweb. It provides a nice basis for assessing the value of the DRBC taking — the theft that is — of our mineral rights.

Here, before we get into the DRBC taking value, is Jim’s superb description of Landgate:

After selling Rice Energy to EQT in 2017, the four Rice brothers, all of whom worked at Rice Energy (and left after the merger), launched a new venture (see Rice Brothers Act II – $200M Marcellus/Utica Investment Firm). Dan, Toby, Derek, and Ryan Rice plus a fifth partner, a former VP at Rice, pooled $200 million of their money (and their expertise) and launched Rice Investment Group (RIG). One of the companies they invested in provides a cool (free) online website for both drillers AND landowners, offering instant valuations for the oil and gas rights along with the location of wells drilled nearby.

LandGate is the first and (so far) only U.S. marketplace for oil and gas, solar, wind, water, and property rights, providing free information to landowners and buyers. LandGate offers digitized land resources valuations and uses its technology to provide “an online marketplace, appraisal services, and SaaS solutions.”

LandGate compares itself to another online service many homeowners and homebuyers are familiar with: Zillow. The LandGate service shows a map of properties with estimates of the value for the oil and gas rights under that property. Of course, it’s just a quick computer estimate and should not necessarily be used for guidance in negotiating contracts. If you want a full, actual appraisal for the value of your mineral rights, LandGate has a paid service. Still, what they offer (for free) is kind of cool and very helpful. It provides a general measuring stick for the value of your, and your neighbors’, O&G mineral values.

We have a quick tutorial below for the service. We became aware of the service when reading a Pittsburgh Post-Gazette article about the Rice brothers’ RIG activities in branching out to invest in “clean tech” companies…

We visited and used the site. The home page has a big box that invites you to enter an address. Oil and gas valuation is preselected by default as the kind of rights/valuation you want to research. When we entered a specific address in Susquehanna County, PA, the site did not recognize it. Same when we entered our own home address. However, we found you can enter a county or town name and the system will recognize it and draw a map which you can then manipulate to find the address you’re looking for.

Jim then proceeds to show the values of oil and gas rights in Susquehanna County, Pennsylvania versus his own neighborhood in Broome County, New York. Suffice it to say Andrew Cuomo has absolutely destroyed the value of these rights in the collapsing Emperor State he rules.

I focused on properties in Northern Wayne County where the SRBC and DRBC watershed’s come together in an area known to have shale gas viable for extraction. That area is depicted on the following map from the SRBC: 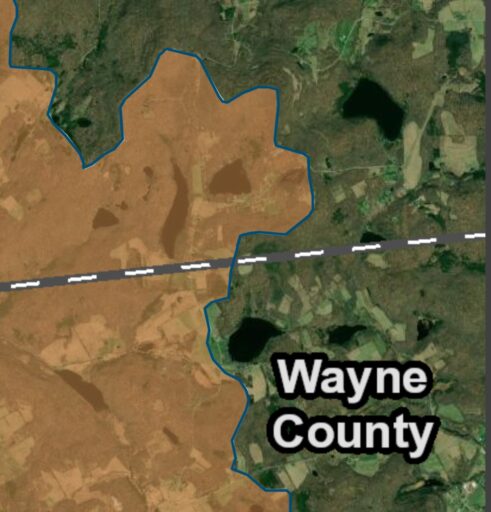 This area is immediately to the east of Starrucca Borough, Wayne County, which directly borders Susquehanna County on its western border. The horizontal line divides Preston Township to the south from Scott Township on the north. The large water body in the northeast corner of the map is Hiawatha Lake. The beige area is in the SRBC free state and the green is in the DRBC slave state.

Now, let’s focus in and look at the Landgate map for this area, converting the values listed for each property to per acre numbers: 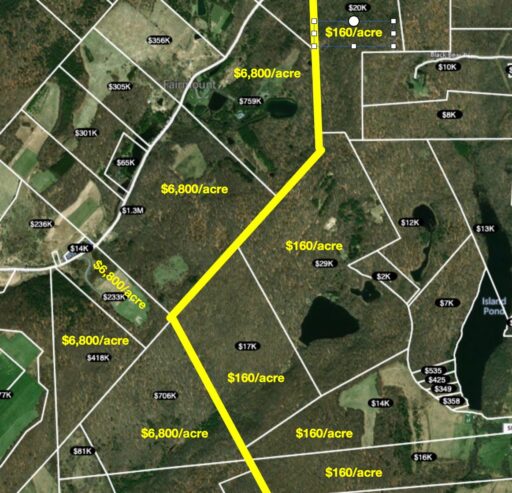 So, what we have is a very clear demarcation between the SRBC and DRBC land. The parcels to the west of the yellow line exhibit Landgate estimated values of $6,800 per acre for oil and gas rights, where those subjected to the DRBC taking are but $160 acre. This means 97.6% of the mineral rights held by DRBC region landowners have been absconded, stolen and simply taken by the arbitrary action of the DRBC slavemasters. The values vary somewhat depending on exactly where one is located but the $160/acre appears to be about average for Northern Wayne County as a whole, which represents roughly 200,000 acres of developable shale resources.

Do the math and the DRBC taking is worth over $1.3 billion. How about that? Let’s see the Commission come up with it or simply end the ludicrous ban in the Delaware River Basin of what the same governing majority permits in the Susquehanna River Basin.

4 thoughts on “The DRBC Taking: What It’s Worth in Real Dollars to Landowners”