Wayne County Commissioner Joseph Adams told the House State Government Committee on Monday that the DRBC has his county in an economic stranglehold.

Good morning Mr. Chairman and House Committee Members.  I appreciate the invitation to present to you this morning.

My topic today involves the economic impact that the DRBC has in impeding new businesses as it pertains to Wayne County and our residents.

The DRBC was created in 1961, primarily to restore life to one of America’s most polluted rivers, as per the DRBC website. The DRBC reports that there has been dramatic improvement every decade for the last 50 years. A large portion of that improvement in water quality is in the upper and central region.

Wayne County is in the upper region and that is the only region that has a DRBC designated “GOOD” status regarding dissolved oxygen and nutrients. We, in Wayne County, are the stewards of good water quality management, with the entire basin being the benefactors. We are being penalized for our good behavior and the resulting “GOOD” status that we created.

The original mission of restoring life to the polluted Delaware River has been met, yet the DRBC continues to increase its burdensome regulations and restrictions on land use. Here are some examples over the past 50 years: 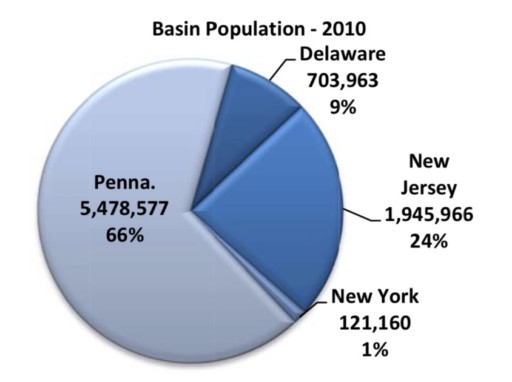 So, if you are a business looking to expand, start up, or relocate to Wayne County – what are you looking for?

If you go to the DRBC website and click on the Watershed/Stakeholder Groups and Partners tab, you will see 110 separate conservation and environmental groups listed with their contact data. Do you know how many county, municipal governments, schools, economic development organizations, downtown partnerships or chambers of commerce are listed as Stakeholders or Partners – ZERO.

If you want to scare off a new business from coming to your County – all you need to do is send them to the DRBC website and if you are in Wayne County, that new business will likely choose to go elsewhere.

The DRBC is so restrictive and obtrusive, that it has stopped landowners and communities from having any economic benefit of Natural Gas Development and Distribution. There are others here to present on the scientifically proven safe process, so I will not spend any time on that inequality and injustice, and the legal issues that surround it all.

I would like to thank Senator Lisa Baker for sponsoring Senate Bill 1189, which makes this taking of land owner rights and the economic benefits to be recognized as an act of eminent domain and compensates the land owner for the lost benefit. We all hope that SB 1189 gains traction and is approved and funded. It would provide amazing economic stimulus for our County, communities and people.

I will comment on the DRBC regulations and restrictions on other economic engines – it hurts the forestry industry, the construction industry and the Farming Industry and all other related and ancillary businesses.  Do you know that Wayne County used to have 1,200 working farms (with good family jobs and sustaining communities around agriculture) at the peak in the late 1960’s and early 1970’s – now we have 59 and the next generation has moved elsewhere to find employment. And much to the contrary of what is out there – Wayne County is actually growing the land mass of forest, not losing it. 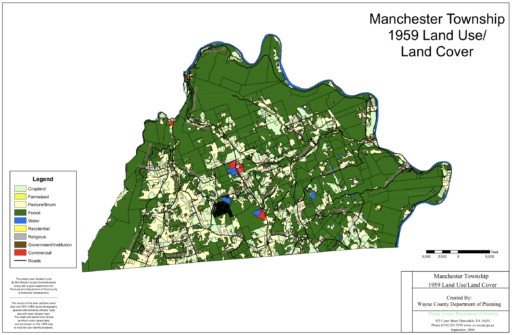 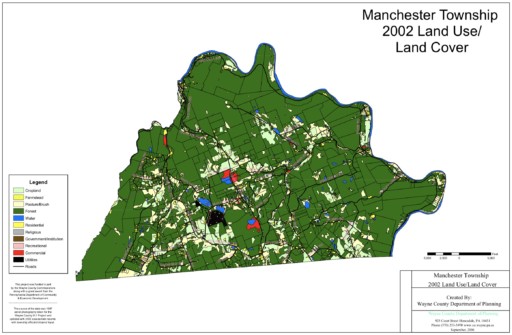 Manchester Township (on the Delaware River) land cover in 2002 (click image for larger version). Notice the increase in forest cover, a trend that continues and is in sharp contrast to the false story the DRBC tells of dealing forest cover.

This money in Susquehanna County can and has been used over the past 10 years for Public Infrastructure construction, storm water and sewer projects, emergency preparedness/public safety, environmental programs, tax reductions, Information technology, social services, capital reserve funds, career & technical centers (which Wayne County does not have and cannot afford), and planning initiatives. All of these expenditures drive economic activity, economic opportunity, business expansion and new business and therefore, population attraction – Wayne County gets nothing.

Obviously, lease and royalty payments from the natural gas developers being paid to the landowners has an incredible multiplying effect on economic activity and stability and sustainability for communities – again, The DRBC stands in the way of this in Wayne County.

So what is the economic impact of the DRBC on Wayne County and its residents? Here is the harsh reality – 59th lowest income out of 67 Counties in PA, 67th fastest decline in student aged population decline out of 67 PA Counties, and a disincentive to start or move a business to our communities. We are becoming a County that struggles to have our families survive and business, people and community to have sustainable jobs.

How can such a beautiful place with 9 out of 11 major factors that businesses and communities need to be outstanding attractors, not moving ahead and in many areas, declining– even though we are 1 hour and 45 minutes from New York City and 2 hours from Philadelphia? One very big answer is the economic stranglehold that the DRBC, and its overreaching, restrictive rules and regulations, has on us.

4 thoughts on “The DRBC Stranglehold on Wayne County, Pennsylvania”