Federal Judge Robert Mariani has just issued an opinion that will, after five years, finally result in the DRBC lawsuit going to trial!

It’s been five long years, but the DRBC lawsuit is finally going to trial, which is a very positive development for landowners. More importantly, the DRBC has shifted its stance to now recognize natural gas development per se is not the issue. Rather, it is the water use connected therewith. This means the DRBC is coming much closer to the SRBC approach to regulation. That’s a good thing but, more importantly, the DRBC may well have boxed itself into a position where retaining even such authority as now exercised by the SRBC is difficult to legally justify. 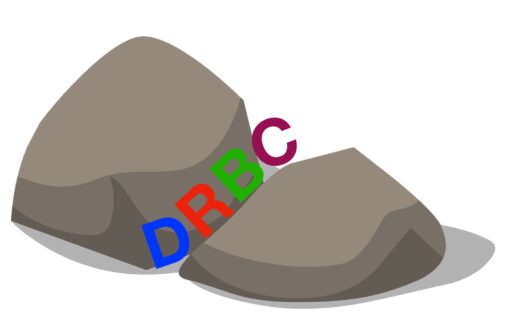 DRBC squeezed between “a rock and a hard place” or not? Only a trial will tell.

The most recent DRBC lawsuit opinion may be found here and I’ve highlighted key parts to make it easier to wade through the legal gobbledygook. Before getting into that, though, let’s examine an order also issued by the judge that sets the stage. The order denies two related Rockefeller groups—the Natural Resources Defense Council (NRDC) and the Catskill Mountainkeeper—the opportunity to file amicus briefs. It also denies the same for the phony Damascus Citizens for Sustainability, which is funded by the Heinz Endowments. Here is what the judge determined after reviewing initial briefs submitted by the three fractivist groups:

The briefs do not address identified ambiguity or provide insight into how negotiation and legislative history of the Compact, the DRBC’s course of performance, and other interstate compacts bear on the question of the drafters’ intent—issues which will be at the heart of the analysis…

The DRBC lawsuit, in other words, is not about what anyone thinks of fracking but, rather, the meaning of the word “project” in the Compact and what it was meant to include when it was drafted. The answer will come from the trial and examination during that trial of: (1) negotiations that led to the Compact, (2) legislative history, (3) DRBC practice and (4) comparison to other interstate compacts. This is what most of that legal gobbledygook in the opinion denying summary judgment to both parties is all about.

There are some additional things in the order worth pointing out, though.  First, it will be noted most of the discussion is about the DRBC points and the judge’s rejection of them. For example:

DRBC’s “uncontested material facts” do not satisfy the summary judgment standard because they do not show that the ambiguity as to whether  WLMG’s “proposed activities are subject to the Commission’s project review authority under § 3.8” has been resolved. In other words, DRBC has not shown, as a matter of law, that the term “project” as set forth in § 3.8 of thee Delaware River Basin Compact unambiguously encompasses WLMG’s “planned activities and planned facilities including structures, machinery and equipment, to be undertaken, constructed or operated for the purpose of managing wastewater and related uses of land.”

One senses, in reading this, that the DRBC has a problem. It cannot defend classifying natural gas development per se as a water “project” because water is the not the focus of the activity; it is only used to facilitate the extraction of gas. Moreover, WLMG has already agreed water withdrawals would come from an approved source and disposal of wastewater would only take place according to existing regulations. The 3rd Circuit has, too, already made it clear the mere ancillary use of water does a “project” make.

This is presumably why the DRBC, trying to subtly inch toward SRBC practice, has quietly changed its position and now says it’s only the water use (e.g., the tanks on site) that it means to define as a project but, as WLMG notes, “individual pieces of equipment were never deemed to be “projects” until now.” That’s undeniably true. A water tank placed on the property of a warehouse for fire protection has is never treated as a “project” subject to9 DRBC authority.

The Commission has, it seems to me, forced itself into a corner where it can justify neither a well pad, nor a water tank, as a “project.” This has happened because the DRBC failed to follow the example of its STBC sister agency. The SRBC did classify well pads as “projects,” which was just as wrong the DRBC interpretation but the SRBC didn’t stupidly surrender to the politics of fracking as the DRBC has done under the purchased influence of the William Penn Foundation. The SRBC instead developed reasonable regulations that only addressed water uses and didn’t attempt to stop fracking, so the industry went along even though the arguably had no such obligation.

Now, because the DRBC acted politically, rather than smartly, it finds itself amidst the DRBC lawsuit, in a position where it has no choice but to move closer to the SRBC approach. This, though, now requires adopting the absurd idea that a few small water tanks are a “project.” The DRBC has, in effect, moved from one wrong interpretation to an even worse one. Where will this lead? Only a fool predicts the outcome of trials, so I won’t do it, but it’s clear the unreasonableness of the DRBC position at the outset has now produced a situation where both the DRBC and the SRBC could find themselves without authority to regulate what happens on well pads.