The DRBC offices were closed last Thursday as electrical outages forced a shutdown. That’s not much of a problem, but there is a solution. It’s natural gas.

When the DRBC offices in West Trenton, New Jersey, had to shut down last Thursday, March 8, the cheers began among my friends, neighbors and relatives. Shutting down the DRBC is next best thing to free beer. The agency has been doing everything it can, in cooperation with the Delaware Povertykeeper to further impoverish our area by denying us the same access to our natural resources that folks on the other side of the Moosic Mountain possess. Yet, the agency could have kept going through the power outage it had been part of combined heat and power (CHP) microgrid such as the one proposed for Trenton.

We could certainly do without the DRBC these days. It’s original functions have largely been superseded and most regions in the country do just fine managing shared watersheds without redundant interstate agencies. Western Pennsylvania is under the thumb of no such agencies, for example, despite the Ohio River that makes up so much of it. I’d like nothing better than our legislature zeroing out funding for the DRBC this year and beginning the long process of withdrawing from this damnable behemoth controlled by out-of-staters. What good is it doing for Pennsylvania — nothing Pennsylvania can’t do for itself.

Yet, if we accept the fact the DRBC is there for the moment, it’s worth noting there’s no reason for its employees to get a free day off from harassing and tormenting us. They ought at least to be made to earn their $4.7 million in annual salaries and fringes (an average of more than $130,000 each for 36 full-time employees, which is 2.6 times the typical Wayne County household income). And, they could have worked if they had a CHP system working off the same natural gas they use to heat their building, as they pretend natural gas is somehow a threat to the watershed. Such a system is planned for next-door Trenton, in fact. 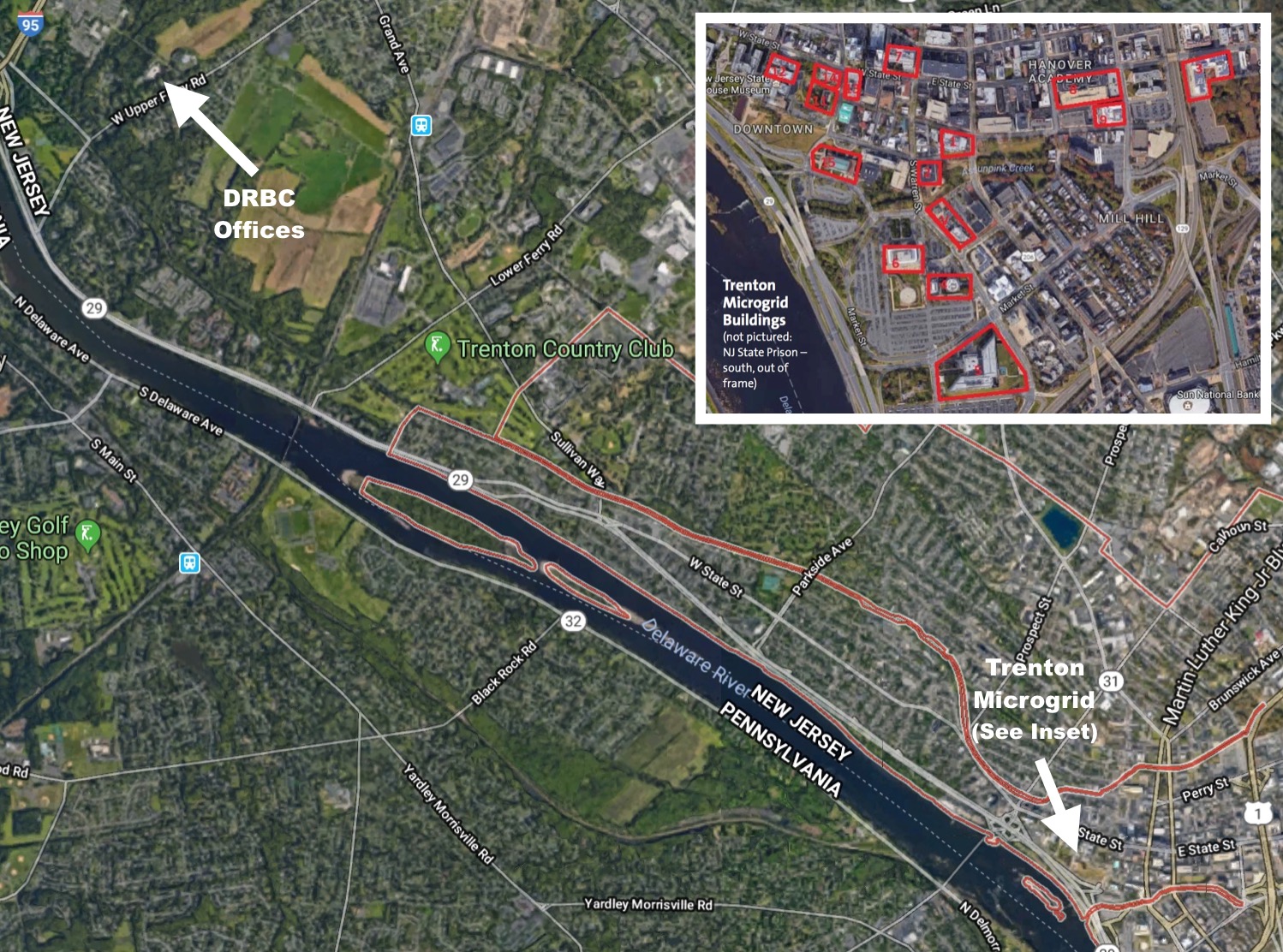 The aerial view illustrates the location of the DRBC offices vis-a-vis the Trenton Microgrid. It’s roughly five miles away, probably too far to be in the micro-grid, but close enough to learn from the example. The DRBC could put its own CHP system, in fact.

Interestingly, the Energy Audit conducted on the DRBC offices that recommended a new natural gas boiler and against solar panels also evaluated CHP potential. Here’s what it said:

In non-industrial settings, combined heat and power (CHP) is the on-site generation of electricity and recovery of heat which is put to beneficial use. Common prime movers in CHP applications include reciprocating engines, microturbines, fuel cells, and (at large facilities) gas turbines. Electricity is typically interconnected to the sites local distribution system. Heat is recovered from the exhaust stream and the ancillary cooling system and interconnected to the existing hot water (or steam) distribution system…

A preliminary screening based on heating and electrical demand, siting, and interconnection shows that the facility has a Low potential for installing a cost-effective CHP system.

Low or infrequent thermal load, and lack of space near the existing thermal generation are the most significant factors contributing to the low potential for CHP at the site.

The DRBC headquarters, in other words, would need to be part of a micro-grid such as the one proposed in nearby Trenton to be successful. Such a micro-grid might have kept the lights on, though. The Trenton micro-grid already exists for thermal heat and cooling purposes. According to a report assembled by the New Jersey Board of Public Utilities, “the Trenton District Energy Complex facility… provide[s] thermal energy to multiple customers and cross multiple rights of ways (ROW)… [It] could extend electric services to contiguous customers …[and] could be developed… to provide electricity to the buildings [it was] supplying thermal energy to. They could then operate in emergency situations.”

That’s exactly what is now proposed and here is the schematic of how it would work: 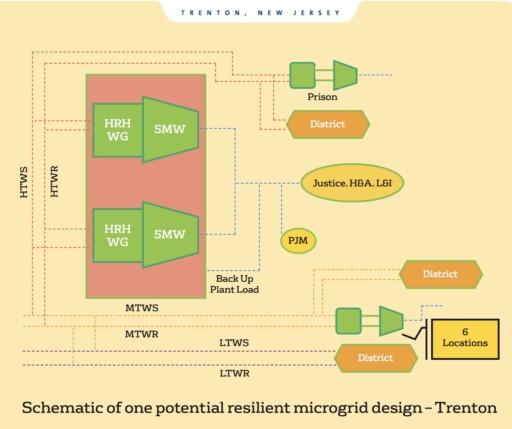 And, here is the fine print with respect to the magic of the system (emphasis added):

The project will involve expanding the capacities of an existing thermal grid that is owned and operated by Veolia. The expansion will include the integration of distributed energy resources in Trenton municipal buildings. Energy Efficiency Measures (EEMs) will also be used to minimize the demand of grid connected facilities.

The microgrid will combine traditional power systems with remote steam turbines, natural gas powered micro turbines and/or reciprocating engines in a highly efficient combined heat and power (CHP) arrangement. Solar photovoltaic (PV) arrays will also be used during normal operating conditions and provide microgrid members the opportunity to use renewable energy to supply a portion of their load. Recovered thermal energy from the CHP plant will be distributed to end users through Veolia’s existing district energy system, providing efficient energy.

Yes, natural gas will make it all possible, delivered by a Transco Pipeline crossing the Delaware just up river from the DRBC offices (or the new PennEast Pipeline that will supplement it). Solar will be but a add-on, included, no doubt, for political correctness purposes. This is the type of system that would allowed the well paid DRBC staff to keep putting out fracking bans.

And, it’s being done right there, virtually within eyesight, in the New Jersey State Capital, Tenton, where new Governor and DRBC Commissioner, Phil “the Panderer” Murphy takes his picture with and does the bidding of fractivists on a daily basis. Given the corrupt state of Northeast politics, where demagoguery is the only thing, the lifeblood of supposed governing, its hardly surprising but the irony and hypocrisy is simply amazing. What a bunch of lying scoundrels.