According to Steven Pratt, B.A. English and Teaching English as a Foreign Language, at the University of Utah, to be “woke” means you know what’s really going on, usually in the context of world affairs. A woke person knows the game and the score, and the cost of buying in to be a player as well as the cost of staying out and opposing the gamed system (In my words – injustice). To be woke is to know that the emperor has no clothes and to dare to be alone in speaking that truth. 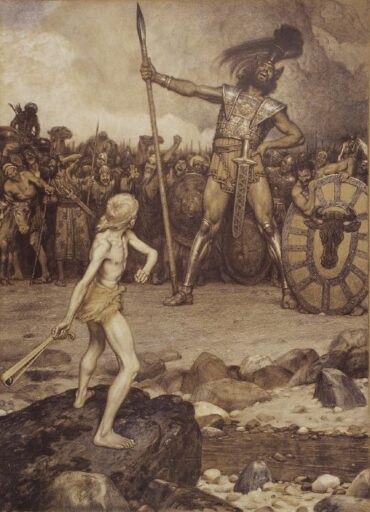 An apt depiction of the struggle: Upper Delaware landowners versus the giant DRBC network

In a David and Goliath match, people who live and work in Wayne County have figured out the game, the score, and the cost of opposing the gamed system played by the DRBC with the William Penn Foundation and the Delaware Riverkeeper at the controls. Injustice.

Now, thanks to the efforts of Representative Jon Fritz and Senator Lisa Baker, Harrisburg is woke. HB 827 and SB 305 have brought into focus and helped to expose just how dastardly the DRBC is.

The recent activity regarding HB 827 has brought to light the true colors of this rogue agency, which actually sent women to Harrisburg to lobby against HB 827 by telling House Representatives there is no gas in Wayne County! Yet, back in 2010-2011the DRBC estimated there would be 15,000-18,000 horizontal wells here.

So, thank you, Rep. Fritz, for getting Harrisburg woke and telling the rest of the House that the emperor, the DRBC, has no clothes. Your keen eyesight has seen the corruption and exposed the mission creep and lust for power that extends way beyond the Compact of this rogue agency.

Interestingly, another definition of woke is “to keep informed of the “sh**storm” going on around you,” and that is an apt description of what it has been like battling the DRBC for the last ten years here in Wayne County, with the landowners paying the price of the injustice served them.

But, once you are woke, you need to “stay frosty,” a Millennial admonishment to stay alert and on one’s toes. So, Harrisburg, when it comes to the antics of the DRBC, you are currently woke. It is imperative that you now stay frosty!!

2 thoughts on “DRBC Injustice: Time for Harrisburg to Get Woke and Stay Frosty!”