The DRBC, in an effort to bring order out of self-created chaos, has announced it will consider something today but whatever it is, is deliberately unclear.

It just gets “curiouser and curiouser” as a hopelessly incompetent and politically corrupted Delaware River Basin Commission (DRBC) composed mostly of the same parties who are the Susquehanna River Basin Commission (SRBC) is forced to react to a lawsuit against it. Today, it will consider a resolution announced, for some strange reason, prior to its meeting but at which no public comment will be permitted. Moreover, the resolution is more ambiguous than a two-headed snake when it comes to direction. The agency is floundering around in a desperate rear-guard defense against a lawsuit by the Wayne Land and Mineral Group (WLMG) while appearing to lead on something which it dearly wants to avoid. 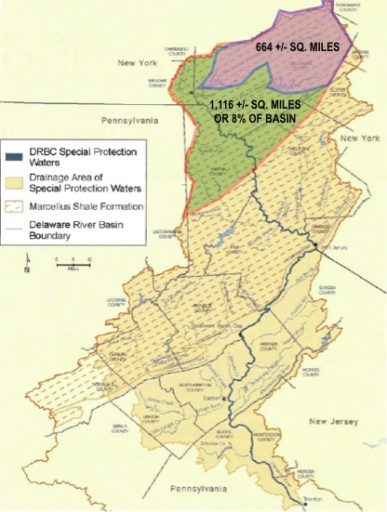 That portion of the Delaware River Basin with viable natural gas resources that is outside the NYC water supply watershed amounts to only 8% of the basin (roughly 1,117 square miles)

Public agencies don’t normally put out drafts of resolutions ahead of meetings unless they’re going to allow public comment. They don’t normally put drafts a mere 48 hours before a meeting either. The fact these things happened in this case reflects on the chaos of the situation, suggests a serious lack of agreement among members and tells us everything that’s happening is a reaction to the WLMG lawsuit due to be argued before the Third Circuit Court of Appeals in early November.

It’s a strong lawsuit (read the latest WLMG brief here) that goes to very heart of the argument over DRBC authority to regulate not just water issues, but land use, as in the case of gas well pads. If the DRBC loses they’ll no longer be able to regulate gas well pads, pipeline crossings, land developments, commercial projects of any kind or any other development except as to the water use itself. They want more and they stand to lose it all.

The DRBC position is very weak and the agency knows it. Its mission creep during the Carol Collier years may very well be brought to an abrupt end (and, obviously, should be). That is a risk too big to ignore for them and the organization is, with the draft resolution put  out Monday, attempting to pull a legal stunt that will somehow derail the lawsuit for the moment.

The DRBC, it appears, want to be able to tell the court it’s working on regulations and that, until they’re done, the case isn’t ripe for decision. This would allow matters to go on as they are. The fact proposed regulations wouldn’t be released until after court argument and would then be subject to public hearings would conveniently reset matters so the agency could take another eight years to work on them, effectively banning gas drilling without formally doing so.

Meanwhile, the agency is fighting an internal battle (reportedly, only three members favor a ban), Pennsylvania Governor Tom Wolf is playing a severance tax battle. He wants to appease his William Penn Foundation donors if he can’t get a severance tax. (StateImpactPA, interestingly enough, has a good story on that.) The Foundation’s shills are otherwise whipping up the chaos. Carol Collier, funded by the Foundation, is acting as Executive Director in exile and saying she now wants a ban after falsely telling the world while she was there that she just wanted good regulations. And, the Delaware Riverkeeper a/k/a Povertykeeper is ranting here and ranting there, as is typical, and seems to be telling a lot of tales out of school. 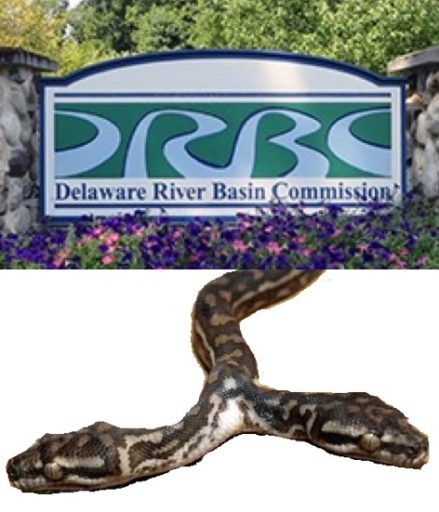 The DRBC: A Two-headed Snake?

Consequently, it’s hard to know where things are really headed but we get a few clues from the ambiguous draft resolution found here:

Putting it all together, it’s clear at least three members of the agency want to make a bold grab for power and impose a ban or something akin to it, but have left themselves an out, too. They certainly want to make their constituents believe they’re for a ban, but it’s not clear what will really happen. This is still further evidence this is all about defense against the WLMG lawsuit. It’s totally reactionary, which may well work out well for landowners when the Third Circuit gets into the weeds. I hope it takes the DRBC out of the gas drilling regulation business and forces them to do what they do when acting as the SRBC; that is to simply regulate water withdrawals and disposal.

There’s also the remote possibility the agency will back itself further into a corner where semi-reasonable regulations are the only way out. This would put landowners in a situation where they’d have to think long and hard about whether any deal would be honored and whether the risk was worth dropping a very good lawsuit that could give them everything they want. 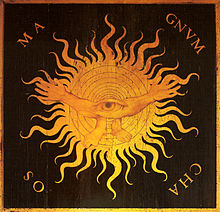 The danger is in the details – more chaos. Back in April, 2011, when a set of draft DRBC gas drilling regulations was out for public comment, my good friend Tom Reilly, a professional engineer who has done a lot of work for the Wayne Economic Development Corporation, commented for the record. He noted those regulations (promulgated, of course, under the watchful eyes of the world’s worst tree-hugger, Carol Collier) were both highly unusual and impractical. His observations were very prescient in terms of what happened later with WLMG lawsuit. They also serve as a warning for what can happen with regulations that only seem to allow gas drilling. Here’s some of what he wrote:

The DRBC does not currently regulate any other industry from a land planning and stormwater management perspective. Many development types create impervious surfaces and impact forested areas much more extensively than gas pad development both individually and cumulatively. Many commercial uses throughout the river basin expose the waters to risks without DRBC siting restrictions and pad dockets. The draft regulations refer to gas “pads” as if the grading of a pad is something unique to gas wells.

Pads are safely graded for many development purposes throughout the river basin on a daily basis without any control of the location or design by the DRBC. Gas stations, power plants, chemical plants and refineries are just a few examples. Major and minor highways on which a wide range of chemicals are transported cross over and border the river and its tributaries much closer than any anticipated well development. It is not logical from a standpoint of relative impacts and risks for the DRBC to specifically target gas drilling for pad regulation.

Each state and locality has the right and obligation to control pollution and regulate land use in its boundaries. The DRBC pad regulations are micro management of land usage within the states that is well beyond the bounds anticipated by its compact. It is expertise that the DRBC does not have, would have to develop and is duplicative of existing agencies and results in unnecessary growth of government…

We tested the pad restrictions and setbacks listed in sections 7.5 B.3 & 4 on large tracts of land in the upper Delaware basin where we have detailed topographic and wetland data. These tracts are typical of the lands in the portion of the basin where drilling is expected. The glaciated terrain has many small pockets of wetlands fed by small  perennial and intermittent streams. There are many rolling hills with rounded tops and rock outcrops. Many areas were previously used for dairy farming and grazing with some still in production. Many of the farms have dug ponds. Many formerly cultivated fields have returned to woodland. Most of the hilltops were never cultivated due to the very shallow soils and are still wooded. The existing roads pass through the narrow valleys and alongside streams where there are the flattest grades.

A plan of a typical 1,000 acre tract is attached [see below] showing that only two small areas of 7 and 18 acres out of 1,000 or 2.5% are allowed to be used with the restrictions and setbacks. These locations are on wooded hilltops far from existing roads. One small farm pond can make a large flat open area near a public road unavailable due to these setbacks. That one-half acre pond is proposed to have the same setbacks as a water supply reservoir or the Delaware River. The un-intended consequence is that development is forced onto ridge tops with substantially greater disturbance of wooded areas and substantially greater earth disturbance due to the lengthy access roads. Both the economics of minimizing pad, gathering line and access road cost and the existing state regulations would typically result in much less woodland and earth disturbance than these restrictions.

The essence of the problem we face today is captured in these few paragraphs. The DRBC has no authority to do what it has proposed. It has never done it before, in fact, and is only doing so now due to relentless political pressure from richly endowed elitist special interests and the malcontents and miscreants they fund. It is also totally ill-equipped to regulate gas drilling compared to the states themselves. Its proposed guidelines for regulations have been designed, either intentionally or through incompetence, to immediately take away anything given and make gas drilling a practical impossibility in the basin. That’s why it’s time to end the charade by defunding it and disbanding it. 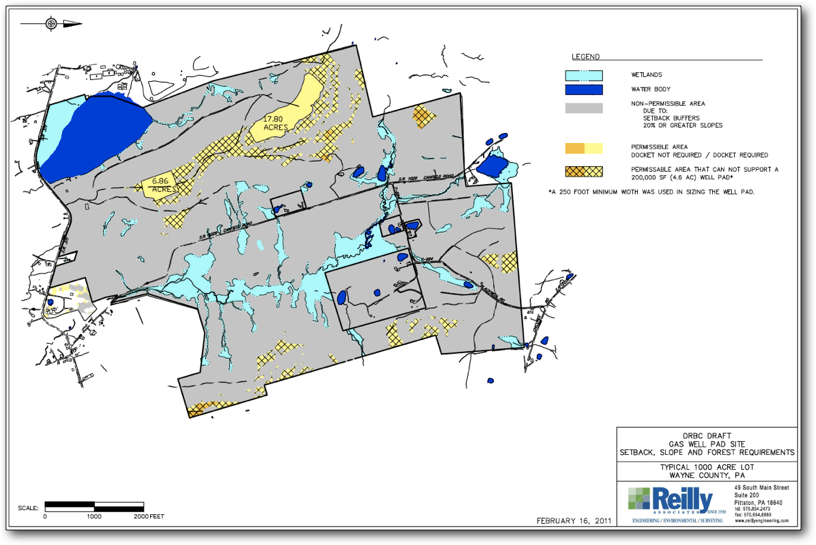