The DRBC is willing to bully shale landowners over imagined threats to water quality but it won’t touch the real pollution down river where the power is.

Monday of this week I wrote about the absurdity of the DRBC attempting to ban fracking over speculated risks when, in fact, there was evidence of real pollution in the Delaware from commercial shipping of chemicals downstream. That evidence involved a spill of up to 600,000 gallons of chemicals that went directly into the Delaware River just upstream from 558,000 New Jersey and Pennsylvanian residents who get 19.9 million gallons of drinking water out of the river. Yet, the DRBC does nothing to address that and focuses its attention on imagined risks of spills at shale gas well pads miles from the river.

One of our readers followed up by pointing out a study from 2002 showing those residents who get drinking water from the Delaware are far more likely to be impacted by a whole host of activities than fracking, yet the DRBC stays relentlessly focused on bullying of shale gas landowners. Why? Because they can. They also want to divert attention from pollution downstream by virtue signaling elsewhere.

The “Hazardous Material Transportation Study” by the State of Delaware Emergency Response Commission, sets out lots of factual data. The most important data is found in two tables, one of which details incidents on the Delaware River itself and the other of which compares risks for different modes of transportation with respect to hazardous materials. Here’s the incidents list: 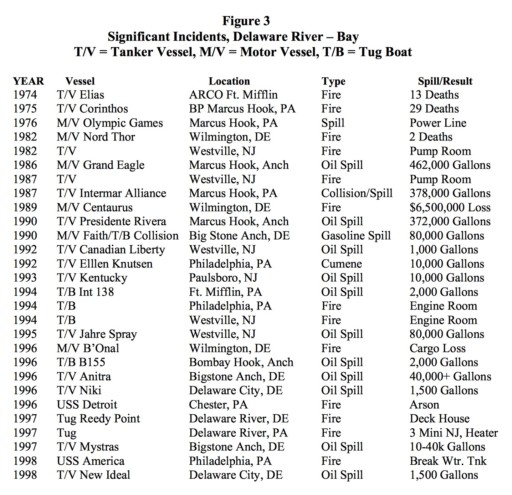 Notice this list doesn’t even include the 1993 cumene spill, which took place upstream north of Delaware, so we get a sense of the real risk involved. While it may not be cause to ban anything, it’s very real—not imagined—and demonstrates fracking is the least of the threats to the Delaware River when all this happening downstream. The second table evaluates the relative risks of differing methods of transporting hazardous materials.

This table shows water transportation incidents do, in fact, top the list in absolute terms, but truck transportation of hazardous materials represents more than five times the risk of incident per ton moved. Those trucks move on highways paralleling the river, like railroads, and they cross bridges over the Delaware River. They also have accidents. Take, for example, this 2015 incident in Pennsauken, upstream from Camden, New Jersey (emphasis added):

A tanker truck carrying about 8,000 gallons of gasoline overturned and exploded into flames in Pennsauken, New Jersey Monday morning. 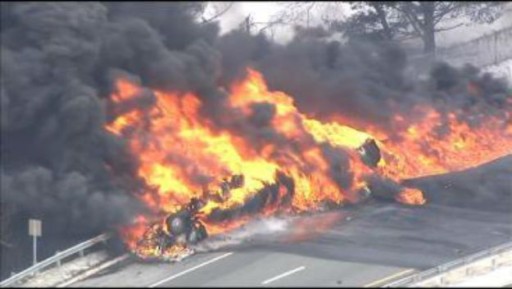 As KYW’s Kim Glovas reports, the fire was put out with foam in 30 minutes, but some gasoline spilled into a nearby waterway. Lieutenant Dan Kerr, Pennsauken Fire Marshal, says some of it got into the Puchak Run.

“There was approximately 200 gallons left on the tanker that has not burned and during the course of the fire, the gasoline that spilled out of the tanker had gotten into the Puchak Run, a non-closed sewer system,” said Lt. Kerr.

“Puchak Run does feed into the Delaware River and we’ve been assured by our local hazmat teams, that they’ve been ahead of that spill and they have contained it into the Puchak Run.”

Numerous other accidents have occurred downstream of the shale region. Water pollution downstream is real, not speculative. Yet, it’s the upstream possibility of fracking literally miles from the river that gets all the attention. Why? Well, for one thing, it’s human nature to harass the innocent person asking for permission while ignoring the violator as long as possible. The reining in of violators takes real work and it can be very difficult, whereas questioning an applicant is easy. Bureaucracies are always better at red tape than handcuffs. Red tape is the cowardly approach of natural born bullies.

Secondly, those downstream polluters represent real economic and political power. Take, for instance, DuPont, the company to whom the Haas family of William Penn Foundation infamy sold its own chemical business. According to this admittedly inflammatory article, some 6.7 million pounds of toxic chemicals were estimated to have been released into the Delaware in 2010 from the DuPont Chambers Works in Salem County, New Jersey. Environment New Jersey and the Delaware Riverkeeper are hardly credible sources, but they draw upon EPA data and make some interesting observations:

The Delaware River, running along the western border of New Jersey and providing drinking water to millions in the Garden State, is the fifth most-polluted river in the country, according to a report released Wednesday by Environment New Jersey, a nonprofit environmental activist group.

“The problem is that government agencies allow these discharges to continue by issuing permits to pollute, a perverse interpretation of the Clean Water Act,” said Tracy Carluccio, deputy director of the Delaware Riverkeeper Network…

DuPont Chambers Works has reduced its releases by 60 percent since 1987, said a company spokeswoman. Most of the remaining releases are nitrates — the product of a treatment process breaking down waste ammonia. Other materials released include nickel, zinc and ammonia, according to EPA data…

The Environment New Jersey report is “biased and bogus” and “irresponsible,” according to the New Jersey Department of Environmental Protection.

The state’s facilities and waterways were not near the top of the list with regard to dangerous carcinogens or developmental-affecting toxicants, said Larry Ragonese, a department spokesman. The report, he said, was not fair to New Jersey water quality, which has improved over the last 20 years.

“We question them. We question the numbers in this report — it makes a few brief New Jersey allegations that are unfounded,” Ragonese said. “DuPont does meet federal, state and Delaware River Basin standards.”

If the Delaware River is really the fifth most polluted river in the world and the Upper reaches are rated “High Quality” and “Special Protection Waters” in the case of the DRBC, as we know they are, then the pollution is obviously concentrated in the lower reaches and DuPont is a big contributor, perhaps the biggest.

The State is quite right, of course, that DuPont meets all its standards and those of the DRBC, but that misses the point; the standards are low, much lower than those of us living and doing business in the upper reaches have to meet. We’re “special,” you see. So, while Tracy’s “permitted to pollute” comment is silly in one sense (treated discharges aren’t likely to be a serious threat), it is on the money in another. DuPont is being allowed to pollute because it’s difficult to clean up things and far easier to just not allow them. She’s correct bin saying the Clean Water Act is being perversely interpreted to set lower standards where there is the most pollution. It would clearly be more logical to require more of polluters, their threats have been proven, and to give the benefit of the doubt where the threats are merely speculative.

Politically, though, no government of Delaware or the DRBC is going to take on DuPont, which is Delaware’s largest company and third largest employer. It isn’t going to happen. They’re not going to take on Chemours, the DuPont spin-off that took over the Chamber Works facility, either. Chemours is, in fact, now proposing a hazardous waste recycling facility that fractivists are trying desperately to make a fracking issue (it isn’t) but the New Jersey Legislature just passed a loophole bill to enable the operation on votes of 38-0 in they Senate and 67-4 in their House.

All the enviros want their buddy, Phil “the Panderer” Murphy to veto it, but even if that happens, it won’t matter as the votes are there to override anyway. No one is going to stop it, including the DRBC, which will simply say that Chemours meets their standards. Who knows; perhaps that’s the reason they’re allowing for import of fracking wastes in their fracking ban?

But, they are going to vote for the fracking ban because that’s valuable virtue signaling that buys cover. Moreover, it’s easy to bully around the shale landowners upstream even though they’re willing and able to meet the DRBC’s perversely much higher discharge standards. We don’t have the economic and political muscle of a DuPont or a Chemours. We’re just kids to be kicked around around for lunch money in the form of our land; land they dearly want as a playground preserve.

One thought on “Why Is the DRBC Bullying Shale Landowners Rather Than Addressing Real Problems?”