The DRBC decision yesterday to sometime consider something we haven’t yet seen is getting press but it’s only a defensive move in a bigger war over land.

I don’t have a lot to add to the post I wrote yesterday prior to the DRBC vote on its resolution. It all went as predicted. Tom Wolf betrayed fellow Pennsylvanians, telling them to go pound salt after they failed to pick up on his request for a severance tax bribe, siding with New York second home owners instead. I knew Wolf would be a governor I didn’t much like but I thought he was smarter than this. Turns out he’s just another trust-funder.

But, that’s not why I decided to add an afterthought to this story. What needs to be said is that this is merely a DRBC reaction to the Wayne Land and Minerals Group (WLMG) lawsuit against it. It doesn’t amount to anything and it will have little effect because the lawsuit is where the action is and it will determine the future.

It was quite amazing to watch WBRE’s reporting of the DRBC vote. It was all about the 29 people from the Upper Delaware region who went to DRBC meeting at Bucks County Community College yesterday and were all in favor of what was described as a vote on a ban. The reality is that every person featured as a local resident opposed to fracking and applauding a ban were long-time fractivists from outside the area who moved in, own very little land, and are determined to keep everyone else out. One is an artist and dancer from Manhattan who now has a place here, another was involved with Josh Fox’s Gasland fraud and runs the radical Damascus Citizens group composed of Manhattanites and a third was Alex Lotorto’s father, Alex being a serial protester. Still another was a PennFuture  staff attorney and, of course, all the other usual suspect shills for the William Penn Foundation were there as well. The DRBC “ivory tower” in West Trenton, New Jersey where the lands and rights of Upper Delaware Pennsylvania residents are sacrificed to make a wilderness for Manhattanites and Philadelphians under false pretenses

It’s hard to blame WBRE, though. They can’t be expected in such a short story to capture everything and, after all, unlike those 29 fractivists, we weren’t there. We couldn’t afford to take the whole day off to travel to Bucks County. We had to work. There are very few trust-funders, serial protestors, or much of anyone at all with such time on their hands on this side of what is a war for our own land. We have to fight it with our hands tied behind our back and don’t have the luxury of being everywhere there is a camera.

This war, as we’ve explained many times here, is all about who controls the land. Gas drilling isn’t the issue and neither is fracking, water quality or anything of the other sub-texts thrown into in discussions about these matters. Wealthy special interests want to make wildernesses of the areas we call home and where we earn a living. Vivian Krause called it “strategic parkification.” It’s about creating playgrounds for the rich and places for their second and third homes that are undisturbed by the rabble we represent to them. Our boorish plans for economic survival—beef/dairy farming, logging, mining, drilling for gas, building things, fixing things and all that—don’t impress them much. They’re more interested in the arts, idyllic scenery and private reserves where they can congregate with other members of the gentry class and make sweetheart parkland deals with the state.

Their plans demand that nothing we do affect them and nothing except what they approve occur anywhere remotely near them. Think of them as uber-NIMBYs who claim vast chunks of land they both own and want to own as personal property and you won’t go wrong. They would like nothing better than a DRBC acting in the role of a regional super land agency where New Yorkers, Jerseyites and Delawarians can gang up to decide what’s acceptable use of Pennsylvania land upriver or across the river from them. They want the DRBC to be able to overrule the Commonwealth’s own standards based on some vague criteria where 10,000 Manhattanites can by petition stop anything they doesn’t happen to fit their fancy.

This is the essence of what the war is about; if the DRBC can regulate gas well development independent of water withdrawals and disposals, it can regulate anything at all that uses water and regulate any aspect of it. Moreover, the WLMG reply brief for the Third Circuit nicely articulates why this is both unnecessary and contrary to the role the Delaware River Compact provides it. It does so, in part, by looking to the Susquehanna River Basin Commission (SRBC) where the same three members (New York, Pennsylvania and the Army Corps of Engineers) forms the majority and there is a comparable compact:

Unlike the Commission [DRBC], the SRBC does not claim that well pads or gas wells are “projects” that cannot proceed without its review. The SRBC does not purport to preempt state regulation of, and prevent, natural gas development. Rather, as the Commission concedes, the SRBC asserts authority over water withdrawals and consumptive use of water… The SRBC approves the former and charges fees for the later. Unlike the Commission, the SRBC recognizes that its authority is limited to addressing the development and management of water resources; the Pennsylvania Department of Environmental Protection (“PaDEP”) reviews applications for wells pads and gas wells…

These short paragraphs illustrate what the DRBC is doing when the majority of the members act as the SRBC is quite different than what it proposes on this side of the Moosic Mountain that defines the border between the two watersheds. When these members wear their SRBC hat, they follow the compact in place but when it’s this side of the hill, they defer to political pressure, read things that aren’t there and make a grab for the land and the power to make a wilderness of it for the enjoyment of those who don’t live here and don’t have to make a living here. 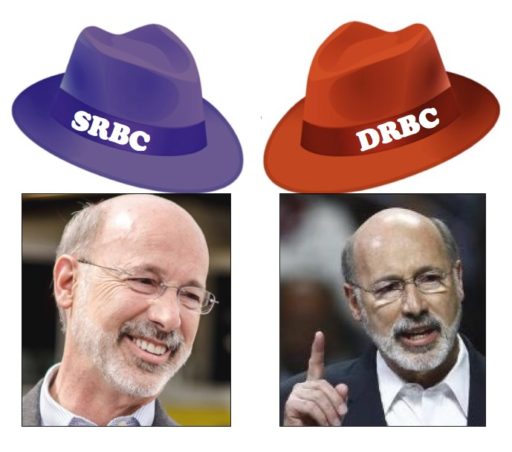 Tom Wolf: Fracking of the water I drink in the SRBC region? No problem. Fracking in the DRBC region? Oh, no, my New York friends might be offended and we have to protect their water!

That’s where things are. The WLMG lawsuit, which has forced Carol Collier to state what she really believed all along and the DRBC to react by abandoning their endless moratorium and make moves toward a ban, will determine our future. Everything rides on it and it’s all about the jurisdiction of a few to take the land of the many.