The bogus doomsday theories of Thomas Malthus and other economic pessimists live forever in the minds of fractivists and other antis despite the truth.

I am ever amazed at the perpetual life of Mathusian doomsday theory, which holds that all trends are forever and, therefore, we must inevitably run out of things; food, water, oil, gas and anything else one can imagine. Malthus infamously predicted we’d all starve someday because “The power of population is indefinitely greater than the power in the earth to produce subsistence for man.”

That was in 1798 and Malthus himself later modified his position, but the simplicity of his geometric projections caught fire and the flame has never died. Th high prophets of doom have, if anything, gained respectability in indirect proportion to the accuracy of their predictions. Read the Limits to Growth, Paul Erlich or Lester Brown and you’ll find a list of failed doomsday predictions longer than the trip to the moon. Yet, all these have only increased the allegiance of followers who imagine we’ll soon run out of something, but it isn’t true with respect to oil and gas or much of anything else other than, perhaps, common sense, of which there is a dire shortage.

All this was brought to mind by an e-mail I received yesterday from someone saying he was leading up a project created “to raise awareness regarding the issues of environmental sustainability and our dependence on oil.” He said he noticed I was already writing about this topic so he thought I might be interested. It was essentially an invitation to put something called the World Oil Supply Clock on my website. Here’s what the “clock” looks like: 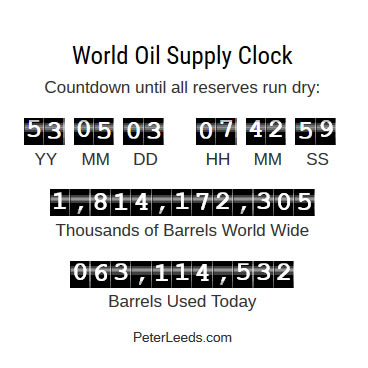 You’ll note the sponsorship of the clock by Peter Leeds, who is a penny stock advisor or something. I suppose the idea is to invest in certain stocks while there’s still time, which is fine if anyone wants to do so, but I have to wonder if anyone relying upon this clock as a motivator understands how little it means. It’s the same sort of propaganda put out by doomsday peak oil folks and fractivists who want to use it as an excuse to shift to renewables. That’s the beauty of doomsday prophesying; it works both ways and you can use it to sell oil stocks and renewables investments or anything energy or survivialist related, except that it’s completely bogus for any number of reasons.

Consider, for example, the fact new oil and gas discoveries are being made every day, like this one in the Golan Heights, for example. Will the world oil supply clock be adjusted to reflect these finds? We’ve been growing our oil reserves for years, in fact, and these observations by Jude Clemente in a Forbes article really put it in perspective (emphasis added):

False pessimistic predictions regarding future oil production dates back to the beginning of the modern oil era in the mid-1850s, and can quickly ensnare the best experts with the most resources available. To illustrate, the Joint Operating Environment 2010 report (“the JOE report”) from the U.S. Joint Forces Command, the leader for the transformation of U.S. military capabilities from 1999-2011,projected a 10 million b/d global supply shortfall for 2015. Now, just five years later, we have a 2-3 million b/d surplus.

The main reason for “being so wrong” about oil’s future availability is the over-reliance on analytical techniques that fail to appreciate petroleum as an economic commodity powered by the constant advance of technology. Many predictions fall short because they too simplistically center on reserve years or the proved recoverable reserves divided by the annual consumption rate. Proved reserves grow over time, however, and estimates of the recoverable resource change as new information is acquired through drilling, production, and technological and managerial development. Another factor that affects perception is that oil companies adopt short- to mid-term planning horizons. Exploration is costly, so there is no economic incentive to look for resources that will not be needed for decades down the road. Globally, crude’s reserves-to-production ratio has hovered between 40-55 years.

That last line is particularly relevant because, as the reader can see, the number never changes that much and, right now, we’re on the outer edge of the scale with more reserves compared to production than is usually the case. The point just before that is the big one though; reserves grow with higher prices. Right now prices are low and we still have huge reserves but as they rise in the future that will incentivize more exploration and development and make previously discovered areas with oil and gas more economically viable to development.

Reserves grow with prices and if the prices go too high, consumers make substitutes (e.g., nuclear, renewables) and use less oil and/or gas. This is why we’ll never, ever run out of oil and gas. Economics ensures it, a point far too many otherwise intelligent people seem unable to grasp, yet it is an infallible truth.

This is why efforts by policy-makers and special interests to force-feed renewables via mandates and subsidies are so misguided. Renewables will do well, very well, in their own time but right now the prices of oil and gas are so low and the reserves so extensive, there is no way to make renewables happen other than by fiat at the expense of taxpayers and ratepayers, or borrowed from our great-grandchildren; money that should be used to reduce our debt, defend our country and solve real problems such as African poverty, for instance.

We are distorting the market in the most foolish way, while the doomsday prophets keep exploiting us all to sell ideologies or stocks. Here we are, 218 years after Malthus delivered his idiotic theory and people are still believing the man, generations after everything he thought has proven to be so much drivel. Such is human nature but somehow we survive.