Brian Zinchuk suggests something’s wrong when professional protesters don’t seem to have any real jobs. Why do we have to deal these people? Why should they influence anything?

Burnaby is the focal point of opposition to the Trans Mountain Expansion Pipeline project, with the terminus of the pipeline in that Lower Mainland community.

Protestors recently got arrested for zip-tying themselves to fences and what not. The Burnaby RCMP stepped in, enforcing a recently-imposed permanent court injunction on protests within five metres of the pipeline terminal entrance. We carried their story on pipelinenews.ca. More than one person pointed out the irony that they used oil-based plastic zip ties to protest an oil pipeline. 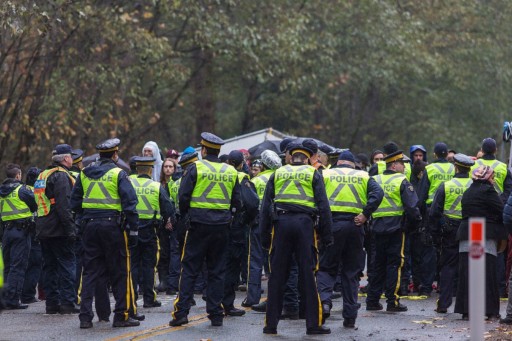 This happened on a Saturday. However, a story in Burnaby Now concluded by saying, “Protests are expected to continue over the next week.”

I imagine they will continue a lot longer than that. If the North Dakota Access Pipeline (DAPL) protests are any indication, they will last months, maybe years.

Thus, it was convenient for these 28 people to get arrested on a Saturday. Other people might go to the mall, take their kids to a school sporting tournament, or clean up their yard. These people chose to get arrested.

But what happens on Monday? Tuesday? And all the other days? Those who will protest, and do so to the point where they get arrested, how, exactly do they do that?

Most of us, you see, have jobs. And if you don’t have a job, you should probably be looking for one, especially given the cost of housing in the Lower Mainland. What do these people do in the morning when they drop off their kids at the sitter? How does that conversation go?

“Oh, hey, Susie, I might not be back today to pick up the kids, like at all. Yeah, I might be locked up overnight until my first appearance in court.

“Oh, today’s Friday, I might be held until court on Monday. Um, here’s a few more juice boxes to tide the kids over.”

There has been a lot of talk about American big business, even in the energy business, financially backing these protests. I find that a little hard to believe, as I don’t think most of these earthmuffins are on any sort of payroll, at least to protest. I think they come by their idiocy and hypocrisy quite honestly.

I know of at least one academic in Saskatchewan, a tenured University of Regina professor, who seems to be at nearly every energy- or Indigenous-related protest in Regina. If it’s a social justice warrior cause, she’s likely there. I pointed out to her, at an oil conference, that her Facebook page showed how many numerous protests her baby had attended while she was on maternity leave.

And, there was a lot of talk about a lot of the opposition to the Keystone XL project having backing from the folks who profit from crude-by-rail. I don’t know if that was rumour or reality.

So if you are a normal Joe or Jane Public, how do you go to a protest on a Tuesday, a normal working day for most folks? After telling your sitter, what do you tell your boss?

“Hi, Mr. Boss. I need to take today off. No, my kid’s not sick. He’s at the sitters. No, I don’t have a dental or doctor appointment. I want to protest a pipeline. Yes, the pipeline that delivers the fuel that goes in the trucks of our fleet to deliver our product. Yes, I know our product is made of plastic, which is made from hydrocarbons. I just want them to stop all pipelines, including that new one. It’s going to end the world, you know.

“Yes, I am paying for a sitter so I can protest a pipeline.

“Have I gone crazy? Well, I guess you could possibly consider this a mental health day.

“Clean out my desk tomorrow? Whatever do you mean?”

Maybe there is some credence to the notion people are being paid to protest. How else would the above conversation take place?

“Ms. Underling, are you telling me you took holiday time to chain yourself to a bulldozer? That I am paying someone else overtime to fill in for your ‘family emergency?’”

It’s income tax season. Do you get a T4 for protesting? Or is it a deduction? I’m really not sure.

This article reposted, by permission of author, from Pipeline News and Battleford (Saskatchewan, Canada) News-Optimist. As I told Brian, we call them serial protesters here.

8 thoughts on “Why Don’t These Professional Protestors Have Real Jobs?”