Mayor Dave Del Vecchio of Lambertville, NJ says he wants to kill an “ill-advised” PennEast Pipeline, ignoring the fact he might as well be Mayor of Gasville.

There’s plenty of demagoguery to go around in New Jersey since Politically Correct Panderer Phil Murphy became governor of the over Garden State, but Mayor Dave Del Vecchio of Lambertville in Hunterdon County is giving the big guy a run for the gold medal in  soapbox oratory.

“We are leaving no stone unturned in our battle to defeat this ill-advised pipeline,” said Lambertville Mayor Dave Del Vecchio. “Now that most of the decisions going forward will be made by New Jersey and regional agencies, we are confident that the fate of this project will be decided on the merits. And the merits favor us.”

Del Vecchio touts a couple of resolutions and a handful of mushy excuses about environmental impacts of pipelines to back up his bloviating about a supposed threat to the city’s water supply and to the Delaware River, conveniently ignoring the most fundamental fact; that he is, for all practical purposes, the Mayor of Gasville. 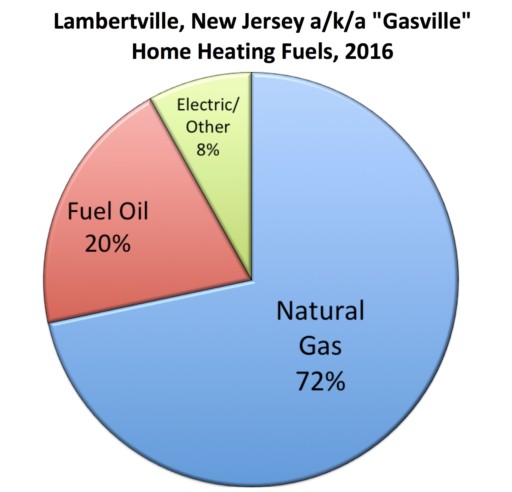 It’s also worth noting the electricity and propane (which is all of the “other” in this case) are probably generated mostly by natural gas as well, which means four out of five Lambertvillians are served with natural gas, making the dapper Mayor Dave Del Vecchio the unquestioned Mayor of Gasville. The fact he’s personally full of hot air only adds to the validity of the title. Yet, he wants the PennEast Pipeline to go elsewhere. Such is the intellectual honesty of the current crop of New Jersey politicians (not that Chris Crispie, as Mark Levin so elequently labeled him) was much better as the state’s governor.

3 thoughts on “We Don’t Need No Stupid PennEast Pipeline, Says Mayor of Gasville”