The Pennsylvania Manufacturers Association “dividing line” video tells a powerful story but the most compelling part of that story is told in Census data. The American Community Survey is the tool the Census Bureau uses to estimate population, incomes and the like on an annual basis. It has proven quite accurate and I went to it yesterday to check out the facts on a rural community in Chenango County, New York know as the Town of Plymouth. It’s not far from Norwich and part of the Southern Tier of New York that has been denied fracking by Gov. Corruptocrat at the behest of gentry class families hoping to empty out as much of Upstate as possible. Plymouth explains a lot.

Why Plymouth? Well, it has to do with an interesting article the other day that caught my attention. It was about the “most distressed places in Upstate NY” and listed “53 communities struggling to get by,” ranking them from bottom to top. I perused the list and saw the most distressed place in Upstate New York in the judgment of a public policy research organization called the Economic Innovation Group (EIG) is the Plymouth zip code (13832). EIG says distressed communities are defined as those with the lowest “economic well-being,” based on a combination of factors including the following:

I know a little about Plymouth. It was the subject of a somewhat intense fracking debate five years ago when out-of-town fractivists flooded the place to tell the Town Board they’d better enact a ban or death and destruction would be coming their way. Rebecca Roter, who later split her own estate in Pennsylvania to make a small fortune and run off to Georgia, after telling others her property values were destroyed, was there, as were others. The Town Board was anything but impressed and never passed a ban, but Gov. Corruptocrat took the matter out of their hands to not only deny economic opportunity to Plymouth, but also the rest of Upstate as he created the dividing line between hope and darkness. 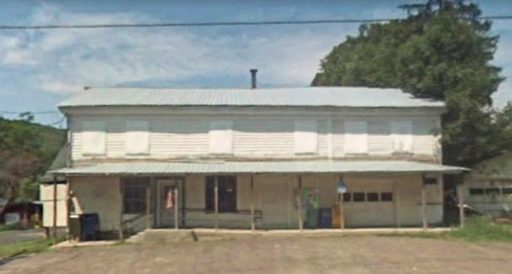 Plymouth is a relatively small town with a population of roughly 1,750 people that is declining rapidly (12% between 2000 and 2010 and still going). Here’s what’s happened with median household incomes in Plymouth as the shale revolution passed by Upstate NY: 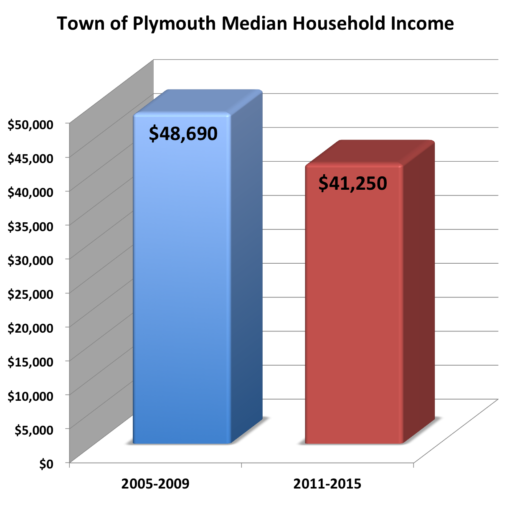 The Town of Plymouth’s 23% DECREASE in median household income

The data comes from the American Community Survey 5-year estimates for 2006-2010 and 2011-2015. Plymouth has, over the period of the shale revolution bypassed by New York, seen its estimated median household income shrink by an incredible 23%. No wonder it’s labeled Upstate NY’s most distressed place.

Some 62 miles away is Dimock Township, Pennsylvania, where the same fractivists, who preached impending doom to Plymouth five years ago, would have us believe everything is ruined. It’s a community only slightly smaller than Plymouth in population (roughly 1,450 people) and here’s what’s happened there: 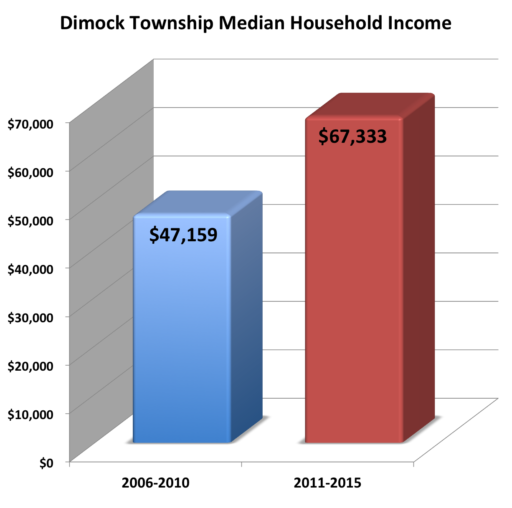 And, while Dimock is a spectacular success story, it is far from the only one. Here’s what’s happened in Cross Creek Township, Washington County, PA, which is another community of similar size (roughly 1,550 people). 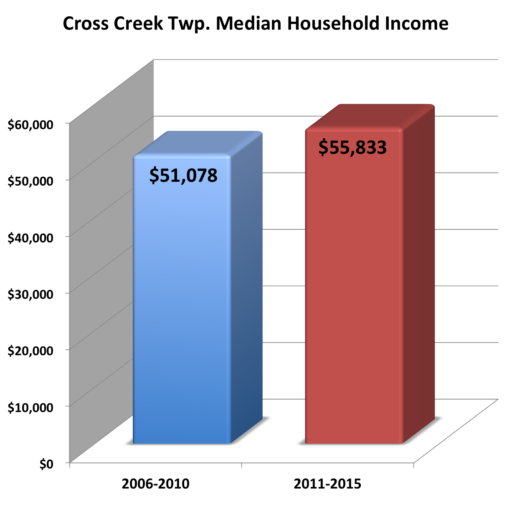 Median household income in Cross Creek Township was almost $3,000 less than Plymouth in 2010 and is now more than $14,000 higher, having increased 9% in five years. Not quite as dramatic as Dimock Township but very impressive, nonetheless, especially in contrast to what’s happening in Upstate NY.

But, there’s more. Pennsylvania also has an impact fee (a severance tax by another name) and it has resulted in the following payments to Dimock and Cross Creek Townships themselves over the last six years: 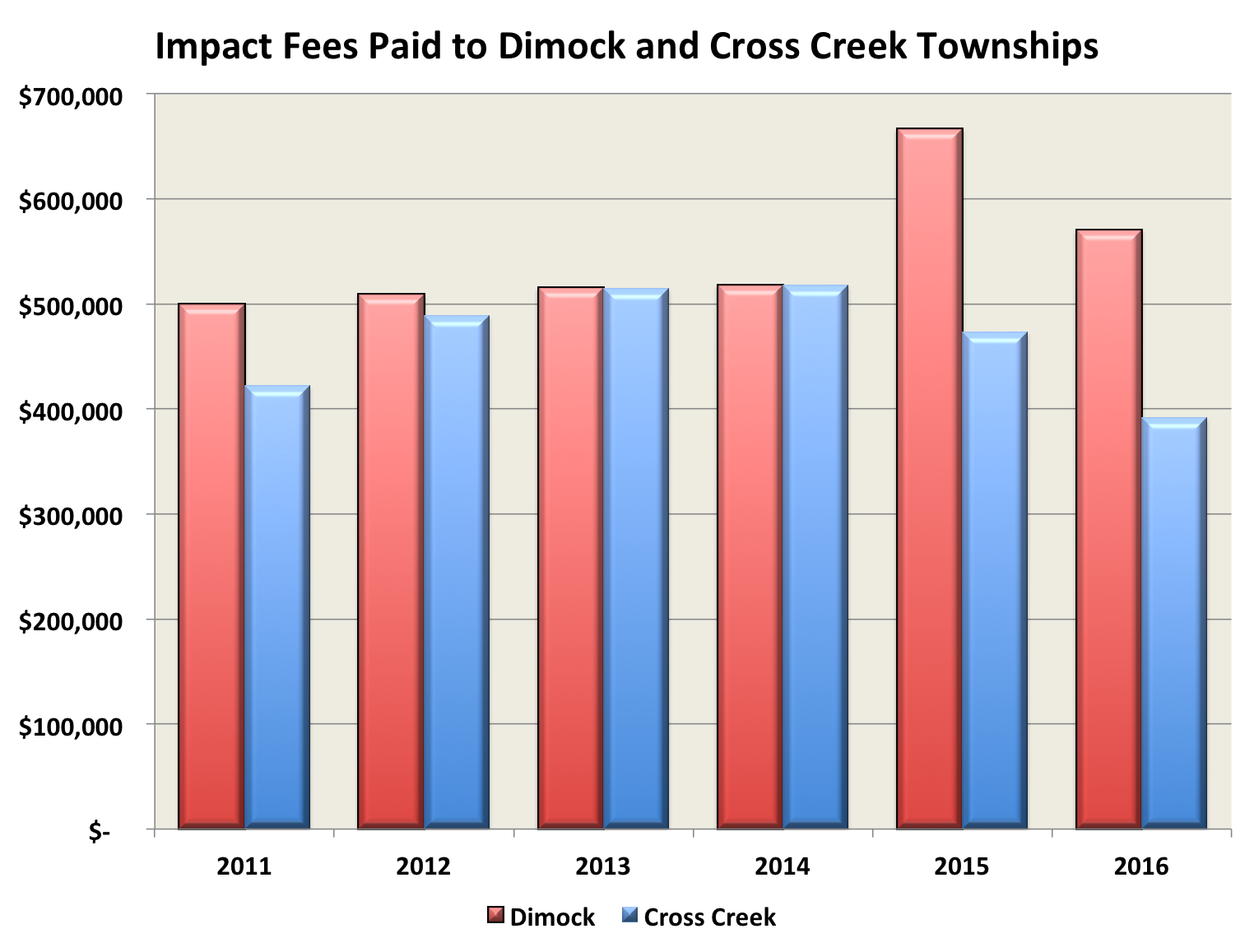 Altogether, Dimock Township has received almost $3.3 million and Cross Creek Township has received over $2.8 million. I’m guessing Plymouth would have been pleased to get a small fraction of either take, but it was denied that opportunity by a corrupt governor catering to an even more corrupt gentry class and the malcontent fractivists who serve as their storm troopers. The facts are the facts, though, and they’re undeniable. Upstate NY’s distress is Pennsylvania’s success.