Divestment threatens public pensions funds that are underfunded, trying to catch up and worried disinvestment is going to destroy any chance of doing it.

Divestment advocates should take heed: the California Public Employees’ Retirement System (Calpers), one of the earliest and biggest proponents of divestment, is reconsidering its stance in the wake of a tremendous budget shortfall generated by their social activism investing strategy.

The Calpers board—facing a $139 billion shortfall—is planning a comprehensive review of its divestment decisions in 2021, but their resistance to divestment has been growing for the past several years.

The reason is simple: Divestment mandates “detract from what a retirement fund is for, which is to provide retirement income for public-sector workers,” said Anqi Chen of the Boston College Center for Retirement Research, which found that returns in states with divestment requirements were 0.40 percentage point lower than plans in states without such requirements. 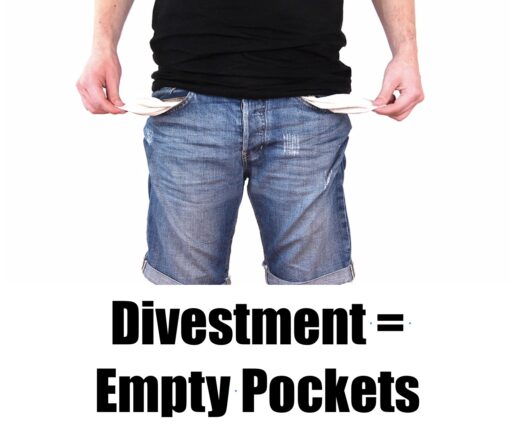 Divestment is also a poor investment strategy. As Calpers Chief Executive Marcie Frost elaborated, “Divestment limits our investment options … With a targeted return of 7%, we need access to all potential investments across all asset classes. Divesting does the exact opposite—it shrinks the investment universe.”

And the Calpers board has stood by this stance in recent years, notably by resisting calls from “Keep It in the Ground” activists to divest broadly from energy investments and more narrowly from projects like the Dakota Access pipeline.

Which was a wise move. Divesting from oil and natural gas stocks is projected to cause disastrous outcomes, given energy’s central role in portfolio diversification. An analysis from Professor Daniel Fischel found, for instance, that Calpers stood to lose $210 million to $289 million per year should it pursue fossil fuel divestment.

California is not the only state that seems to be reconsidering divesting. New York, while loudly passing their Climate and Community Protection Act, quietly let a divestment bill die in committee in its recently concluded legislative session following opposition from the Democratic comptroller and unions representing civil service workers.

And given that public pensions currently have a $4.2 trillion shortfall according to the Federal Reserve, organizations across the country should consider the ineffective and costly outcomes of divestment.

Divesting from oil and natural gas is misguided for a number of reasons, but one of the most overlooked is that the large companies usually targeted are investing billions in renewable research and investment (not to mention solar and wind both rely on oil and natural gas). As the Motley Fool reported, “Far from being a villain, big oil is perhaps one of the most important allies for renewable energy.”