Dimock plaintiffs’ attorney, Leslie Lewis, admitted (again) to the court yesterday that “there’s no toxic content of the water that has been tested out.”

Yesterday’s events in court in Scranton further revealed the bumbling incompetence of the Dimock plaintiffs and, especially, their attorney. Once again, it was nothing less than pitiful, as Attorney Leslie Lewis tried to stop Cabot from eliciting information from one of the plaintiffs, Victoria Hubert, regarding whether she had considered asking the EPA for help in interpreting water test results for her well. The EPA, of course, found the water to be safe and Lewis didn’t want to get into a discussion of that, for sure, so she objected, blurting out, in the process, exactly what she didn’t want the jury to hear; that “there’s no toxic content of the water that has been tested out.” 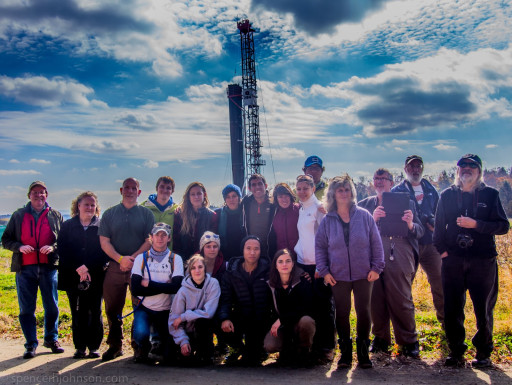 The Energy Justice Shale Initiative gang behind the Dimock plaintiffs (note presence of court disruptors Vera Scroggins and Craig Stevens, as well as someone who appears to junkyard owner Ray Kemble (back row, second from right)

This wasn’t the first time that fact came out, but the stunning clarity of the statement, coming from the plaintiffs’ own legal counsel, was jarring in comparison to her blundering attempts to somehow build a case for damages based on water impacts. You can get some added perspective from Phelim McAleer. Also, be sure to check out McAleer’s report on Scott Ely’s earlier testimony when he effectively claimed to be Superman with the ability to taste and small tasteless and odorless methane. It’s great fun reading and illustrates, with great finesse, the fractivist position; “to hell with the science, we know what we believe and we’re not letting evidence get in the way.” That attitude was on full display yesterday and the day before with Monica Ely’s testimony. It’s the defining characteristic of the Dimock plaintiffs’ case to date.

Still more of this was apparent in and exchange yesterday between Dimock plaintiff Victoria Hubert and Cabot attorney Jeremy Mercer. Attorney Mercer  asked whether, after Cabot stopped delivering water in 2009, her family had used the water out of the their well for a couple months. She testified they had and there had been no unusual odor or taste to the water.

Mercer noted she had also, in her deposition, testified there was discoloration to the water either. Hubert tried scrambling, saying the water had been cloudy but the point was made; she had testified there were noticeable problems. Mercer then asked her if the water in her  well could have been suitable for drinking. She tried to wiggle out of it by saying she wasn’t sure and then came the final blow:

Q. But you had no evidence whatsoever at least as of July of 2011 that your water was anything other than okay for drinking, correct?

Yet, here the plaintiffs are at court, still arguing their water was not and is not usable. We see how deliberately blind the fractivist cause is to facts on the ground, science and even their own knowledge. And, who’s behind this ludicrous case? Well, we know the Energy Justice: Shale Initiative is helping to fund it. It is one of the faces of “Action Center Inc,” a phony 501(c)(3) charity doing serial protesting, radical politics and grass-roots lobbying that it shouldn’t be doing, using funds provided by the Earth Island Institute, among others, which, in turn, is funded by the Park Foundation, the Energy Foundation, the Rockefeller Brothers Fund, et al. — all the usual suspects.

These fractivists have pushing out a false Dimock narrative for the better part of a decade now and it’s collapsed bit by bit until this case is all there is left and npw they’re preparing the narrative to explain why it hasn’t gone well. The best of example of this is a report at the DeSmog Blog which, of course, blames it on the fact Judge Carlson won’t permit last minute “evidence” to be employed and this:

“It’s always David versus Goliath, you know?” Jeff Zick, a resident of neighboring Hop Bottom, PA, who joined a group of roughly a dozen environmental and community advocates outside the court house on Monday, when the jury was empanelled, told ABC News. “Any time you get — these poor families, they don’t have lawyers like Cabot has.”

Really? Well, not when you’ve got Rockefeller and Park money on your side (money that also pays for DeSmog Blog by the way), trickling its way down to you and the Heinz and Haas families are underwriting glowing StateImpactPA coverage of your case, just to mention a couple of things to the contrary of that narrative. But, far more important is this; if there was hint of a real case here that could be won the Dimock plaintiffs wouldn’t need a dime to pursue it. Rather, they have trial lawyers falling over each other to take it on contingency. The fact they don’t speaks volumes as to the lack of evidence. Even stronger is the fact the super-slimy trial lawyer firm of Napoli Bern Ripka, which had represented Dimock plaintiffs, left the case after it became apparent there was no evidence, leaving the Dimock plaintiffs dependent on the hapless Ms. Lewis and her sidekick, fractivist Elisabeth Radow.

This is the nature of fractivism, of course; one unsubstantiated accusation after another, the whole thing propelled forward on the strength of manufactured narratives assembled by radicals, funded by special interests and given voice by these pathetic Dimock plaintiffs.

6 thoughts on “Dimock Plaintiffs: “We Concede There’s No Toxic Content””