There was a Dimock firewater show in court yesterday as a Cabot witness related how her husband would light a jug of water on fire  – three decades ago.

Yesterday was a boring day at the Federal courthouse in Scranton, until the last hour or so when two things happened that made it a most wonderful day. One was that, after several hours of Dimock plaintiffs’ attorney Leslie Lewis flailing about during cross-examination trying unsuccessfully to trip up Dr. Tarek Saba, the defense had a further opportunity, during re-direct, to drive home his point: that there was no evidence gas drilling had damaged the plaintiffs’ water wells. The second was an 87-year old woman named Mildred Green, who stole the show. 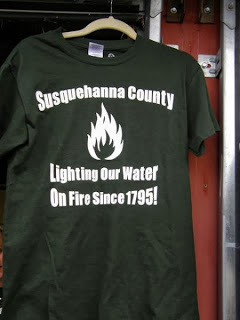 Leslie Lewis did her best to wear down Dr. Saba but none of it worked. It was several hours of utter futility on her part as she attempted to ridicule his use of historic information, challenged his methods and questioned why he didn’t agree with her two experts, Tony the Tiger Ingraffea and Paul Rubin. None of it worked. Saba stood his ground and refused to be bullied by Lewis and, finally, after it had gone on much too long with fruitless results, Attorney Amy Barrette had an opportunity to engage in re-direct on behalf of Cabot; an opportunity she used skillfully to hammer the main points of Saba’s earlier testimony.

The re-direct was a lesson in environmental forensics, geology, hydrogeology and law. Barrette asked Saba if he recalled Tony the Tiger’s testimony about gas bubbling that occurred when Cabot drilled a well in 2008 and then inquired whether he had been able to use “what we call the DNA of the methane” to determine “whether or not that particular methane in the Ely and Hubert water” supplies came from that source. He answered yes and stated it was not the same methane.

Saba was then asked whether there were others factors in his determination and methodology that told him the methane did not come from the gas wells in question, to which he offered the following:

Sure. I spoke about these factors yesterday; its time doesn’t match being one of them. The concentrations of the methane in the water do not indicate a trend, [there’s] the DNA and there’s no pathway. I talked about all four elements. All four lines of evidence tell me that the gas in the plaintiffs’ water wells is not from the Gesford pad.

Q. Could you explain to the jury why it is not?

A. Because we had reports of water samples we collected. I spoke about, for example Taylor from 1984. He collected water samples from Susquehanna County. He showed that 30% of the water samples he collected contained exceedences of the iron, aluminum and manganese. These are natural background ground water samples. So I know and, actually it’s a subject of many publications after that,  I know that background, ground water condition could very well contain concentrations above the secondary MCL or the primary MCL

Q. And in this case, …were you able to determine whether or not any constituents were fairly and accurately occurring above the MCL or SMCL in this region and particularly in the locality of the plaintiff’s water wells?

Q. Now, with respect to the element of the aluminum in the Ely’s water supply, was the background in this case above the secondary MCL?

Q. And were all of the samples throughout time of the Elys’ water supply. but for Mr. Rubin’s; were they all within background?

This was a point made over and over again throughout the direct and indirect testimony by Dr. Saba; that Paul Rubin’s test results were at variance with everything else, including other water samples. The reason became crystal clear with further re-direct, as Barrette asked Saba to refer to Paul Rubin’s field notes:

Q. If you look at the lower last six lines, those are the entirety of his field notes sampling for the November 22, 2011 sampling. When Ms. Lewis was questioning you about stabilization, you said one way to determine whether a well was properly purged was through stabilization?

Q. Do you see anything at all in Mr. Rubin’s field notes that he did anything to stabilize the parameters?

Q. Do you see any reference whatsoever at all to show that he stabilized turbidity?

Q. Do you see any measurements at all that he even measured once the turbidity level?

Q. Do you see any indication that he took anything other than one reading for other stabilize parameters?

Q. Okay. Did this help you form your opinion that he did not properly sample the water?

Q. Dr. Saba, would you consider a purge rate of five gallons per minute for water sampling event would be inappropriate?

Q. Would you turn to the report. Can you turn down to the third full paragraph [where] it starts on the date of 2011?

Q. Could you please read what Mr. Rubin indicated in his report about the rate at which he purged the well on the date of the sampling?

A. On the date of the 2011 sample collection I purged Scott Ely’s well for about one and a half hours at a steady rate of

Q. Thank you. With all of your expertise and in your professional opinion, was that purge rate excessive and inappropriate?

A. It was excessive and inappropriate.

Q. Can you explain to the jury what effect on his sampling had with that excessive and inappropriate purge rate?

A. Sure. Like I mentioned, the maximum capacity of this well Mr. Ely’s well is five gallons per minute. So, when you purge at the maximum capacity of the well for one half hours what you do is you drop the water level in the well inside the well itself and you make the water rush at high velocity inside the well. This well does not have a casing in the bedrock. So the rushing of water will take out sedimentation that was already in the well and some of the sedimentation that’s coming from the fractures that provided that water. It will stir it up and  what you will see up as a result is a turbid looking sample. We saw the results. We saw that concentration to be an outlier. That’s a function how the sample was collected.

That’s a pretty simple and powerful explanation and it went this way throughout the rest of the re-direct as Saba explained why the chloride levels and other evidence available all indicated there was no connection between any water issues on the plaintiffs’ properties and the gas drilling Cabot had undertaken.

The best was yet to come, though, and it came in the form of Cabot’s next witness, Mildred Green, who has lived in the area all of her life and proceeded to tell the jury all about Dimock firewater. 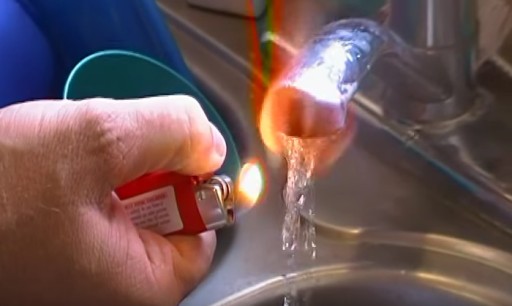 Green related how she and her husband had drilled a water well in 1983 to replace their spring. After some initial problems with salt in the water from their new well, they had noticed what looked like soap suds in the sink, suds they later learned were methane, as well as some other issues:

Q. When you saw the “soap suds” coming out of the faucets, did you have anything weird happening with the toilet?

A. Well, not back then, we didn’t so much, but, if I was gone like four or five days and come home and didn’t flush the toilet I know how to fix the back of the toilet because it would blow some of the stuff off, you know.

Q. So is it your understanding the actual methane in the back of the toilet from you being not there would blow part of the toilet off?

Q. And that was all prior to any natural gas drilling, correct?

Q. Ma’am, have you ever seen anyone put a match to that water.

Q. When was that and tell us what happened.

A. Well, you know, my husband had a jug on the counter in the kitchen…and they would put the water in the jug, shake it, put the cover on, and take the cover off and after they shook it pretty good, and [there’d be] a flame was about this high.

Q. Did you actually see the water flaming?

A. Oh, yeah, half the neighborhood saw it, too. It was I guess you’d call it a fun thing to do.

Q. Was that at a tame before natural gas operations occurred in the area?

A. Long time before.

Q. Over time was it sometimes more bubbly?

Q. Now, did you continue to use and drink the water even though it had the methane in it?

Witnesses don’t get much better than Mildred Green but she had one more thing to say and it came on cross-examination by Attorney Leslie Lewis:

Q. Do you know the cause of…do you know whether those folks in Lawton have water just like yours…where methane just comes up naturally?

Judge Carlson: Ma’am, congratulations. I have been doing that all week. I am going to sustain that objection. I don’t know what else to do, folks.

Mrs. Green: Sorry about that.

It was a great moment and a fitting way to end the day, another very bad day it seemed for the Dimock plaintiffs.