Fractivists have delayed and killed some pipelines to the Northeast but they’ve failed to stop Marcellus Shale gas from reaching Maine and Nova Scotia.

For years now MDN has kept an eye on several LNG (liquefied natural gas) export plants planned in Nova Scotia, Canada. Why? Because of the potential for Marcellus/Utica gas to feed those hungry beasts, once they are built. How would/could that happen?

The answer is primarily through a plan floated by Spectra Energy (now owned by Enbridge) called the Access Northeast Project. It is a roughly $3 billion project in New England to connect four existing pipeline systems (with enhancements). They include the Texas Eastern, Algonquin Gas Transmission, Iroquois and Maritimes & Northeast pipelines.

That last one, the Maritimes & Northeast (M&NE) pipeline, stretches from Massachusetts to Nova Scotia, to bring offshore Canadian gas south into New England. Part of Spectra’s plan is to make M&NE bi-directional, able to flow gas to Nova Scotia.

Atlantic Bridge beefs up capacity along the Algonquin Gas Transmission pipeline and turns Spectra’s M&NE bi-directional, to carry more Marcellus/Utica gas into New England and eventually all the way to Nova Scotia. Work on the M&NE must have progressed quickly, and under our radar.

We learned what;’s happening by reading an article that surprised us. Apparently, M&NE is already bi-directional and has been since this summer. A paper mill operator in Nova Scotia says he has been buying Marcellus gas since this summer to power his plant. Who knew? Some of our molecules are now able to make it all the way to Nova Scotia!

The problem for the paper mill, and for all of Nova Scotia, is that when winter sets in and gas supplies get tight (and expensive) around Boston, Marcellus supplies to Nova Scotia will dry up or become uneconomical:

Tom Dewtie needs to make a lot of steam.

The steam runs the convoluted contraptions that somehow turn spruce trees into kraft pulp in the big mill at Abercrombie Point.

To make steam he needs to burn something.

So four years ago Northern Pulp spent $5.1 million running a natural gas pipeline into its Pictou County plant and converting boilers so that they can burn natural gas — which is cleaner and cheaper than oil.

“For the majority of the summer I’ve been importing Marcellus Shale gas from Pennsylvania and some from an exchange in Ontario,” said Dewtie, supply manager for Northern Pulp.

Other times, he gets gas from Nova Scotia’s offshore — Sable Island and Encana’s Deep Panuke.

But it’s about to get more expensive to make steam.

Sable Island and Deep Panuke will be wrapping up production over the next two years.

With no domestic supply, all of this province’s natural gas will be coming up from Massachusetts in the Maritimes & Northeast Pipeline.

Before it gets into the pipeline originally built to carry Sable Island’s gas south, it will have to pass through a choke-point near Boston.

And that’s going to be expensive for the major industries, like Michelin Tire and Oxford Frozen Foods, along with universities, hospitals and homeowners who have converted to heat with natural gas.

“You are at the end of a long pipe coming out of the worst gas market in North America,” said Tom Adams, a Toronto-based energy analyst.

“What this means is that while the outlook for natural gas customers in just about every other area of North America is in the range of $2-3 (U.S. per gigajoule), in Nova Scotia it looks to me like the long-term prospects are in the $6 to $9 range.”

It’s a grave, he said, that Nova Scotia dug for itself when it banned hydraulic fracturing in 2014.

Of course, if more Marcellus gas was available to send up the pipeline, via the Access Northeast project, Nova Scotia would be fine. But, that won’t happen, thanks to anti-fossil fuel fools.

So, exactly how is our gas is getting to our Canadian cousins? Another article sheds more light on how that paper mill has been importing Marcellus Shale gas from Pennsylvania, which we thought was odd when we first read it. We searched every map resource we could find and found no pipelines from Ontario to Nova Scotia; they don’t exist.

The only pipeline into (out of) Nova Scotia is M&NE, but the article chronicles the fight in Weymouth, Massachusetts to block the expansion of a compressor station there. Enbridge (Spectra Energy) plans to expand the compressor as part of the Atlantic Bridge project. Atlantic Bridge will flow more Marcellus gas north into Maine, and potentially beyond Maine into Canada, via the M&NE. The compressor is needed to flow more gas along the existing pipeline. While the article is largely about the fight over the compressor station and implications of further delays in building it, it is the other details that supplied the missing pieces of the puzzle that explain how our gas currently gets all the way to Nova Scotia.

Enbridge plans to reverse the flow on the M&NE pipeline “north of Massachusetts” sometime next year, to carry Marcellus gas into Maine and on into Canada. However, at least some of the M&NE is already reversed and carrying our gas into Canada. Where? That’s the missing bit we didn’t know until reading the second article. It says “Appalachian gas could be routed through Ontario and Quebec and into western Maine on the Portland National Gas Transmission System pipeline, which connects with the Maritimes line in Westbrook. That roundabout path has been used in recent years, but increases the cost of gas.”

So, it appears the paper mill in Nova Scotia has been buying Marcellus gas via Ontario, routing it over the Portland pipeline. Now it all makes sense. That is how Marcellus/Utica gas is making its way to Nova Scotia; via a connection in Ontario. 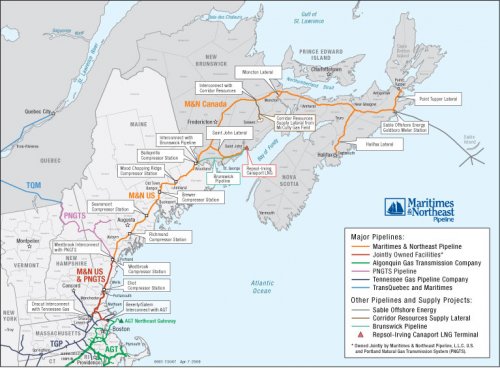 There is a more direct route, which will be available via that expanded compressor and reversed M&NE in Massachusetts. It will happen; the question is when, which depends on how long the legal issues take to get resolved:

Continued delay in building a new pumping station in Massachusetts for natural gas bound for Maine could lead to higher prices for heat and electricity, if the station isn’t finished before the 2019 heating season.

Plans to fully open the Atlantic Bridge pipeline project next month and send lower-cost gas from Pennsylvania north have been stalled by ongoing opposition to building a large compressor station in Weymouth, Massachusetts. The compressor is needed to maintain sufficient pressure for delivering gas to customers in Maine, New Brunswick and Nova Scotia, according to Enbridge Inc., the Calgary-based fossil fuels company that took over the project after merging with Spectra Energy last year. The project is intended to expand capacity along existing pipelines…

The compressor dispute is now in federal court, and if the compressor fight drags on another year, experts say, the region may need to bring in gas over other pipelines and through additional overseas deliveries of liquefied natural gas. Both alternatives would be more expensive and would cost customers more money, although there’s no way now to know how much…

Facing opposition from residents, clean-energy activists and politicians, developers gave up over the past two years on two multibillion dollar pipelines – Northeast Energy Direct and Access Northeast. Issues including resistance to the techniques used to extract shale gas, support for renewables over fossil fuels and community concerns along the pipeline routes combined to put major pipeline expansion on hold.

The Weymouth compressor is an example of a local fight with a regionwide impact.

Enbridge chose Weymouth in part because it’s the right location on the pipeline network from an operations standpoint. It wants to build a 7,700-horsepower compressor station next to an existing power plant.

But opponents say the compressor will create noise, pollution and a safety risk in a densely populated area. South Shore residents have formed a resistance group – Fore River Residents Against the Compressor Station – and a division of Enbridge has taken the town and the Weymouth Conservation Commission to court over its refusal to grant a building permit. It’s arguing that federal approval to build interstate pipeline projects preempts local authority…

If Atlantic Bridge is stalled into 2019, Silkman said, Appalachian gas could be routed through Ontario and Quebec and into western Maine on the Portland National Gas Transmission System pipeline, which connects with the Maritimes line in Westbrook. That roundabout path has been used in recent years but increases the cost of gas, according to Silkman, an economist and national expert on gas markets.

Atlantic Bridge customers on the Maritimes line are distribution companies, power plants and a paper mill. They include Bangor Gas, Casco Bay Energy, Maine Natural Gas, Summit Natural Gas of Maine, Woodland Pulp and Unitil, which is an “anchor” participant in the project.

Unitil, the parent company of Northern Utilities, has 27,000 customers in Maine, the bulk of the state’s 33,000 natural gas residential customers. Additionally, there are roughly 12,300 commercial and industrial customers…

Editor’s Note: Jim’s analysis is, as usual, spot on, but I when I read the name of the local resistance group, Fore River Residents Against the Compressor Station or FRRACS, something didn’t smell quite right. The oblique inclusion of “frac” in the acronym was, obviously, no accident. It’s the first tip-off this is not just some NIMBY initiative, but also an ideologically motivated enterprise in which this compressor station is simply a leverage point:

A visit to the group’s website shows it raises money through an affiliated tax-exempt outfit, even though it’s totally political. That supposedly charitable outfit, the Toxics Action Center, accepts the money as tax-exempt donations and then passes it through to FRRACS for political use—an all too typical abuse of tax-exemption by fractivists. A review of the Toxics Action Center’s 990 returns reveals it has received $100,000 or more from the Energy Foundation, which gets its money from the infamous Sea Change Foundation funded by dark money from off-shore accounts and the super wealthy Simons family whose hedge funds are invested in solar scams threatened by inexpensive clean natural gas.

It’s always the same people behind the fractivists when you scratch the surface and the Toxics Action Center also pays the The Fund for the Public Interest over $100,000 per year for administration. The Fund for the Public Interest is a partner of the US PIRG organization whose sole practical purpose is generating lawsuit opportunities for trial lawyers. It runs ads on Craig’s List to hire paid anti-fracking protesters. Over and over again, it’s the same special interests manipulating NIMBYs and others to do their dirty fractivist work; even in Canada, where they have killed fracking in Nova Scotia and kept it in a state of indefinite moratorium in neighboring New Brunswick at great cost to the ordinary people of both provinces.