The Denton ban on natural gas development is a case of special interests focused on halting it here in New York manipulating others to their benefit.

I have to say, I was beyond shocked when I heard there was a proposed “ban” on natural gas development in Denton, Texas. Texas is booming, bigger and better than ever because of natural gas. What could have happened to make anyone there want to pause the process that spurred their economy?

News of the Denton ban didn’t settle well with me so I immediately got on the phone and asked the right questions to the right people. The Denton ban was proposed by Frack Free Denton and was originally set aside because there was no reason to even consider it. After talking with Governor Perry’s office and Lindsey Baker of the City of Denton, it was more than clear there were no health reasons or incidents of contamination. There had to be more to the story.

The History of the Denton Ban

The rest of the Denton ban story gradually came into focus as I researched the issue further. This article by Steve Everley at Energy In Depth, for example, demonstrates who actually voted for the ban. It wasn’t the residents of effected areas of the city. They opposed the ban by a two to one vote! “The strongest support for the ban came from precincts near the two college campuses – University of North Texas and Texas Woman’s University – which deviated considerably from how the rest of Denton” voted. 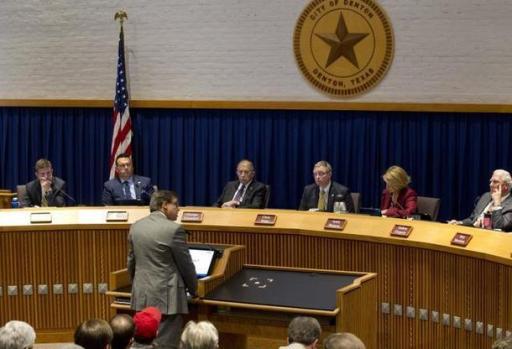 The history of the issue in Denton is also revealing. The natural gas industry has been booming in Texas for longer than we can remember and they have leases from decades ago throughout Texas land. In recent years, the antis have been popping up in different places trying to stop natural gas wherever and however they can. They sought an opportunity to create a ban in a community where they could falsely claim a majority of Texans had turned against fracking.

A setback was pushed to prevent any natural gas development within 1,200 feet of a Church, School or residents. The natural gas industry had vested rights in leased land that was affected by this new set back and, presto, an issue was created for exploitation by Earthworks and other antis to demand a ban. Even so, the proposed ban was voted down by the City Council with a 5 to 2 vote before being put on the local ballot as a referendum vote.

I spoke with Attorney General Greg Abbott (just elected as Governor of Texas) and the state’s Railroad Commission (which regulates the matter in Texas) and they both spoke highly of natural gas development. They support the industry and are thankful for everything the industry has brought to Texas. The Railroad Commission will, in fact, continue to permit natural gas development regardless because the companies have the vested rights to the land they have leased to this point.

Everyone I spoke to from Texas was in support of the natural gas industry and seemed as frustrated as I was when I heard about this ban. I support natural gas even more than I did before after speaking with officials from Texas who live in harmony with the industry every day and support it. Those to whom I spoke, just like the two-thirds of the voters in the neighborhoods where drilling and fracking were actually taking place, supported natural gas development and didn’t have anything negative to say about it when we spoke.

I spent a lot of time researching this matter because it’s important to me here in the Southern Tier of New York. Groups such as Earthworks are funded by New York State special interests such as the Ithaca-based Park Foundation ($375,000 since 2009) to create issues in Texas so they can make a case for stopping development in New York. 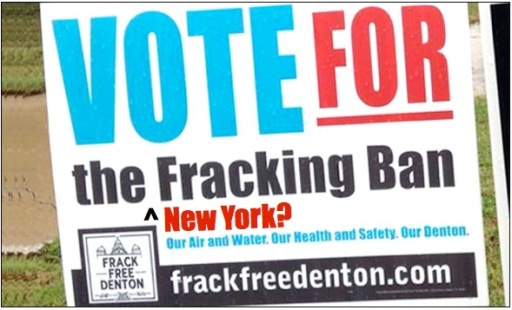 The William Penn Foundation (primary funder of the Delaware Riverkeeper) and the New York Community Trust gave them another $156,200 in 2012, and they got $382,000 more from major funders of the New York based NRDC such as the Schmidt Foundation and the Energy Foundation. Then there is Jay Halfon, who is runs the Rockefeller’s Sustainable Markets Foundation (Walter Hang’s boss) here in New York while generating potential cases for trial lawyers. New York is what the battle is all about for them. They desperately want to stop gas here so they fight there for attention. It’s that simple.

Natural gas could do wonders for New York State and that’s why I, and many others, fight them. We need something because, as a region, we are clinging to anything to stay afloat. We, unfortunately, have a handful of vocal antis and a governor who refuses to make a decision regarding natural gas; he feels riding the fence as long as possible regardless of the impact on Upstate New York is acceptable ethics.

If Upstate New York doesn’t see natural gas soon we won’t have a population left. Many New Yorkers are leaving the state every day in search of a better life for themselves and their families in places such as Texas, which is one of the reasons the special interests are focusing on Texas today.

Who can blame those who leave? New York government has captured by these special interests. So has the City of Denton, Texas, but they’re still a tiny minority in that state as a whole and the ban is under legal challenge so I’m hopeful that bit of injustice largely inflicted by Planet Ithaca types here and there will soon be undone. The injustice of New York’s inaction will not be so easy but it, too, must be corrected, and soon, or there’ll be no Upstate New York to worry about, which is exactly what all those Park Foundation/NRDC types want, of course.

5 thoughts on “The Denton Ban on Fracking; The New York Connection”