The Commonwealth Court issued an opinion Wednesday that dealt the Delaware Povertykeeper a/k/a Riverkeeper yet another blow to its desperate anti pipeline campaign; one intended to halt the shale revolution by preventing the transportation of the stuff to market. It’s a completely disingenuous campaign, of course, but Ms. Disingenuity knows exactly how to play to her funders and they want the revolution smashed. So, she’s using their money to finance one lawsuit after another to delay, frustrate and squelch every pipeline project that serve to move Marcellus Shale gas to New York and New Jersey where it’s needed. 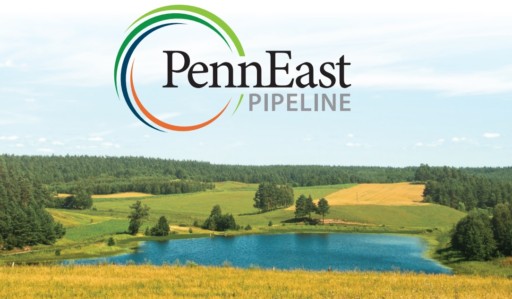 The court case is an arcane one, but then, many of them are. It’s about a very late filed Povertykeeper petition to the Pennsylvania Environmental Hearing Board to hear a challenge to Pennsylvania DEP’s granting of a water quality certification under Federal law to the PennEast Pipeline project (emphasis added):

After careful review, we conclude that the EHB did not err or abuse its discretion in denying Riverkeeper’s Nunc Pro Tunc Petition. Riverkeeper were never enjoined, in this case or any other, from appealing DEP’s approval of a Water Quality Certification application to the EHB…

Moreover, as the EHB noted in its opinion, Riverkeeper possess considerable knowledge and experience regarding challenges to DEP approvals of such applications, by virtue of Riverkeeper’s conduct and involvement in other, similar matters, thereby diminishing the likelihood that Riverkeeper were actually misled by the allegedly incomplete information in the DEP’s February 25, 2017 notice…

Therefore, we agree with the EHB that Riverkeeper had no legal justification for failing to file a timely appeal with the EHB. We conclude that the EHB did not abuse its discretion in finding that Riverkeeper had shown neither that they relied on the misleading February 25, 2017 DEP notice nor that they acted diligently to preserve their appellate rights. Consequently, because Riverkeeper failed to establish“good cause” to permit the filing of an appeal nunc pro tunc with the EHB, we affirmthe EHB’s October 24, 2017 Order.

What’s also interesting is how Ms. Disingenuity describes herself for purposes of this proceeding:

If the Maya is a “privately funded ombudsman,” just who is that made her “responsible for the protection of the waterways.” The answer, of course, is that her responsibility is to her special interest funders who want to make a wilderness playground of areas that also happen to have shale gas. That shale gas is a potential foundation for economic development that would raise property values and make it more difficult for those funders and their allies to acquire land for the wilderness.

This is what is behind the legal challenge the Delaware Povertykeeper knew was going nowhere when it filed it. It was merely another delaying tactic and they’ll probably be van appeal to the Pennsylvania Supreme Court and then further appeals to Federal Court as the legal harassment of PennEast on all possible fronts in a futile attempt to prevent Marcellus Shale gas from getting out of Northeastern Pennsylvania. The more it can be delayed, the less chance the shale revolution will ever reach the Delaware River basin. It’s an act of desperation, in other words.

The reasons for that desperation are readily apparent in EIA’s Today In Energy column yesterday. It’s because the  Povertykeeper organization and Ms. Disingenuity herself both know what new pipeline infrastructure is doing for the Pennsylvania shale revolution; it’s increasing prices for the natural gas and bringing them more in line with Henry Hub pricing. Here  are the important excerpts from the story:

Over the past decade, natural gas production in the Appalachian region has grown faster than capacity to move the gas into U.S. markets, pushing down local prices. More recently, pipeline infrastructure from Appalachia has increased capacity to deliver Appalachian natural gas to regional market, increasing relative spot prices at Appalachian hubs, and narrowing their price spreads relative to the U.S. natural gas price benchmark Henry Hub in Louisiana. 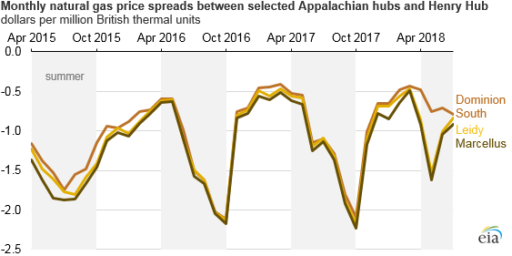 On June 1, 2018, Rover Pipeline’s interconnect to the Vector pipeline and Dawn Hub, near Detroit, Michigan, was completed, which increased takeaway capacity from southwest Pennsylvania and further narrowed the price spread between Dominion South and Henry Hub. In June, the Dominion South price was $0.71/MMBtu lower than Henry Hub; however, the Marcellus and Leidy hubs were $1.01/MMbtu and $1.04/MMbtu lower than Henry Hub, respectively.

The Transco Atlantic Sunrise project, which will connect natural gas production centers in northeastern Pennsylvania to demand centers in Mid-Atlantic and southern states, is expected to be completed by the end of 2018. As this project comes online, price spreads between the northern hubs and Henry Hub will likely narrow.

And, that’s the reason for all the challenges, lawsuits and petitions. Anything that slows down pipelines such as the PennEast delays the inevitable day when Pennsylvania producers get what they deserve for their shale gas and the revolution spreads. A spreading revolution threatens the gentry class plans for making a wilderness and that’s why they keep funneling the money to the Povertykeeper organization and Ms. Disingenuity to muck up the works.