The Delaware Riverkeeper is doing politics today, as it does a unique form of grass-roots lobbying for a fracking ban. Where is the IRS when we need them?

THE Delaware Riverkeeper is a radical environmental group operating as the self-appointed “caretaker” of the entire Delaware River Basin. It’s run by Maya van Rossum and gets its funding from a variety of foundations, mainly the William Penn Foundation. Riverkeeper’s cause célèbre is a complete, and permanent, ban on fracking in the Delaware River Basin. They’d actually like a permanent ban throughout Pennsylvania (and every other state in the Union), but they’ll take a ban in the River Basin as a first step.

Unfortunately, the Delaware Riverkeeper has the ear of the Delaware River Basin Commission (DRBC) and has pressured the DRBC for years to institute a total ban on fracking. The DRBC finally took a step in that direction in September.

There has been no fracking in the River Basin for 10+ years. So why the urgency for the board to pass a ban now? Because a Wayne County, Pennsylvania landowner has taken the DRBC to court, challenging the latter’s right to impose such a ban. After all, the adjacent Susquehanna River Basin (overseen by the Susquehanna River Basin Commission or SRBC composed of the same governing majority as the DRBC) is loaded with fracking–with no harmful effects on water quality, streams being monitored continuously.

Earlier this month oral arguments were heard in federal court on the case. The attorney for the DRBC fainted under heaving questioning. The case was postponed to today. In the meantime, Riverkeeper is obviously not convinced the DRBC will follow through with their threat to pass a permanent ban. Or, perhaps they want to give the DRBC more ammunition to do so.

Ironically, or perhaps intentionally, the Riverkeeper is hosting a webinar today to stoke their crazy groupies. Mamma Maya’s sidekick Tracy Carluccio (Riverkeeper Deputy Director) will give the faithful instructions for how to harass local town boards to the point they’ll sign a petition to support a permanent ban. MDN has a mole on Riverkeeper’s email list and we have their invite below.

Our encouragement to MDN readers in the River Basin is to do likewise: contact your local town board BEFORE the crazies do, and demand that they NOT support a ban on fracking in the Delaware River Basin.

Here’s a copy of the Riverkeeper email invite to their Monday webinar: 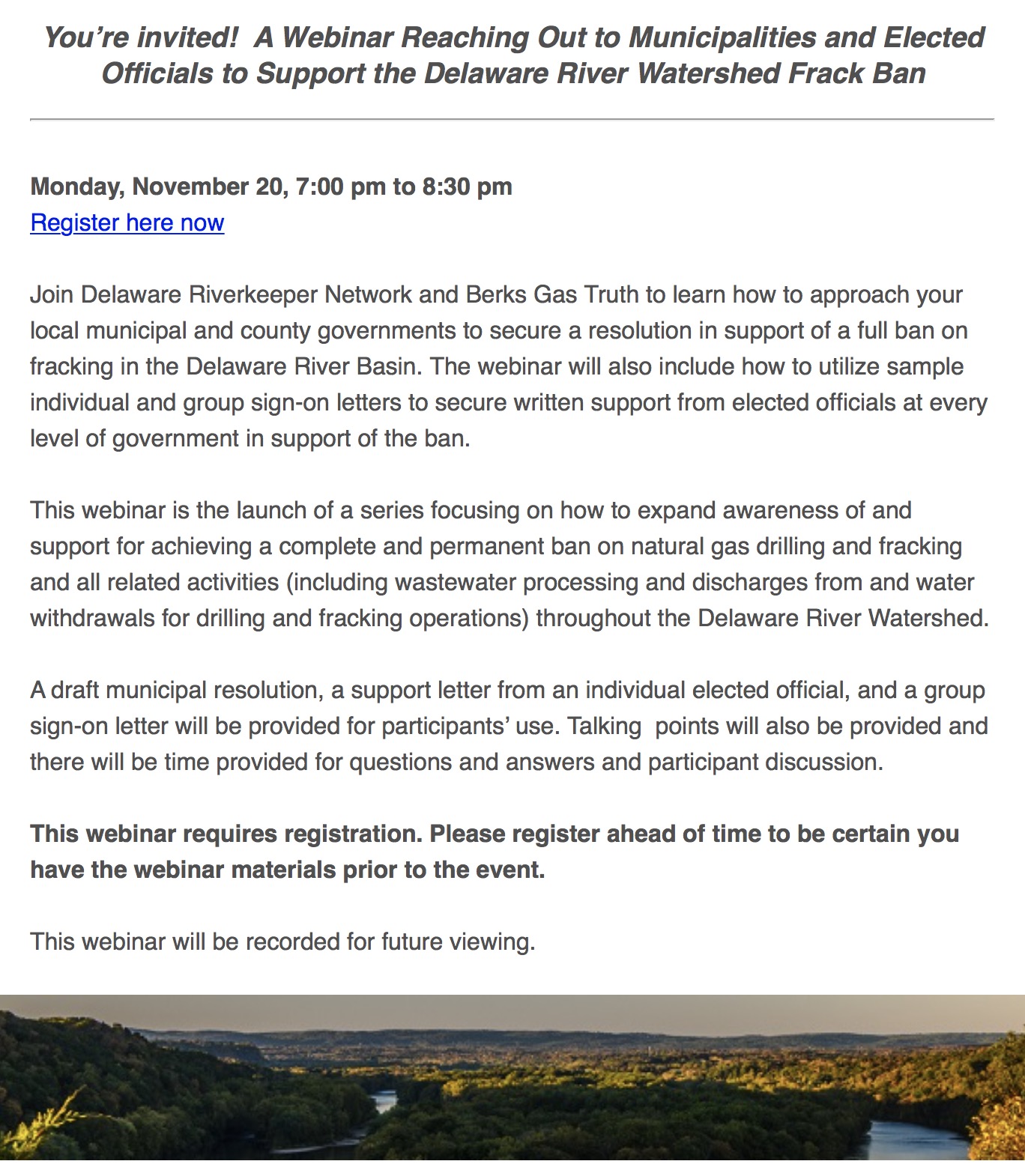 Riverkeeper will not only tell their mind-numbed followers what to say, but what to think, as a bonus.

Editor’s Note: If this isn’t grass-roots lobbying as defined by the IRS, then nothing is. Here is the IRS definition:

And, here’s how much grass-roots lobbying the Delaware Riverkeeper a/k/a Povertykeeper told the IRS it did in 2015:

You read that correctly. The Delaware Povertykeeper, which does virtually nothing that is not political, says it did zero grass-roots lobbying in 2015, the latest year for which it has reported, and a mere $29 in direct lobbying. Yet, here it is promoting an event where it will train the public in how to influence legislative bodies. Where is the IRS when we need them?

1 thought on “As the Delaware Riverkeeper Does Politics, Where’s the IRS?”