The Delaware Riverkeeper, ignoring its charter and using money from the William Penn Foundation, traversed 200+ miles from the Delaware River to fight natural gas development in Middlesex Township, Butler County, Pennsylvania. The Commonwealth Court had shut down the Delaware Riverkeeper’s challenge of local zoning allowing such development in an R-AG Residential Agriculture Zoning District encompassing most of Middlesex Township. It had focused on trying to expand the meaning of the Commonwealth’s vague Environmental Rights Amendment (ERA).

The case then went to the Pennsylvania Supreme Court, which remanded the case back to the Commonwealth Court to reconsider in light of its then recently decided Gorsline decision. The Commonwealth Court just did so and, as I noted here, “handed the Delaware Riverkeeper its head a second time.” Now, the Supremes have done so, too, pulling the nails out and breaking the club the PovertyKeeper tried to make of the ERA as a weapon to bully small communities who want natural gas development. It has also officially branded the Delaware Riverkeeper Network as big-time losers. 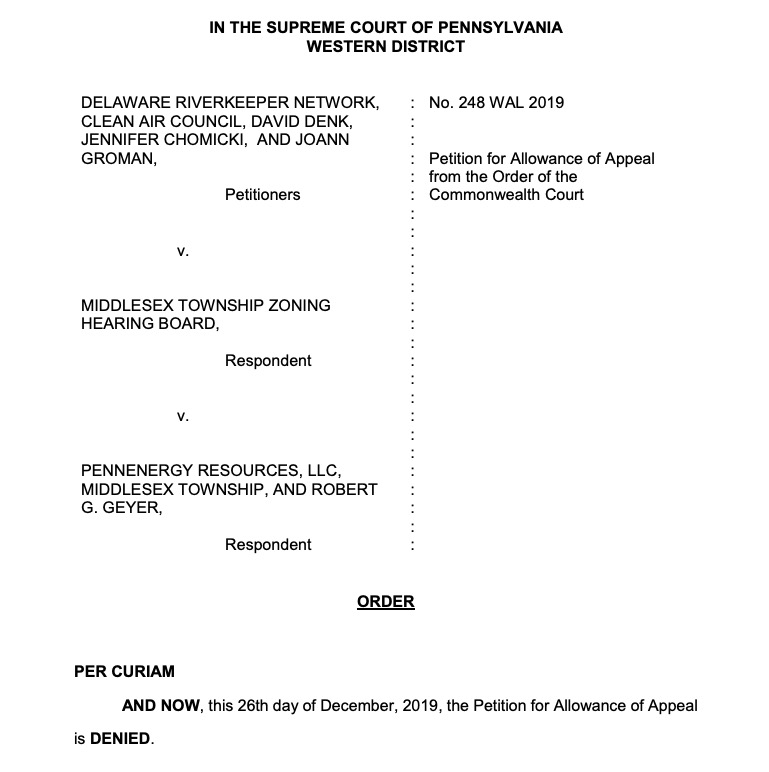 The Supreme Court, in its original decision, clearly indicated a desire to foster consistent interpretation of the the Environmental Rights Amendment and the Commonwealth Court took the cue,  offering up the following, for example:

Based upon their findings of fact, the [Middlesex Township Zoning Hearing] Board properly concluded:

• The Township Supervisors’ view that the totality of oil and gas production, both during drilling and after reclamation, is compatible with an agricultural district is rational. First, that has been the history of Middlesex Township, both in the very long term and in its more recent experience with the three prior unchallenged oil and gas well pads. Second, competent testimony was provided that oil and gas production helps support agricultural activity and preservation, which in turn helps keep suburban growth in check. Third, to limit oil and gas drilling to a traditional industrial zone, or to subject a well pad to a two-mile exclusion zone, as advocated by the experts for the [Objectors] would constitute exclusionary zoning.

• Oil and gas activities are specifically excluded by Ordinance 127 from exclusively zoned residential districts, be it R-1, R-2 or within any PRD overlay district. This exclusion encompasses the three components of oil and gas drilling – well pads, processing plants and compressor stations. In addition, compressor stations and processing plants are not permitted in the R-AG district. The only oil and gas activity permitted in the R-AG mixed use district is an oil and gas well pad and its temporary industrial components. All of these limitations on oil and gas use evidence rational planning and a balancing of interests.

• As previously stated, [Objectors] have failed to meet their burden that oil and gas drilling pads will injure their neighbors. Admittedly, the oil company has not established that no harm will occur. The concerns of the credible witnesses are reasonable. But, the burden of proof lies upon [Objectors] and the evidence they presented was woefully inadequate and did no justice to their local constituents.

• The Township Supervisors, as set forth above, have acted in their role as trustee for future generations, as required by Article I, §27 of the Pennsylvania Constitution, by helping to preserve agricultural resources for future generations. They did not act in a vacuum, they did not act with due disregard for the residents of [the] Township. Instead the effect of Ordinance 127 constitutes a balancing of the benefits of preserving agriculture including utilizing oil and gas use upon agricultural areas encompassing no more than 30% of the Township, and by limiting suburban growth.

Based on the foregoing and based on our analysis in Frederick applying the Supreme Court’s opinion in PEDF II, we hold that Ordinance 127 does not violate the Environmental Rights Amendment to the Pennsylvania Constitution.

All this has now been sustained by the Pennsylvania Supreme Court’s Western District. An appeal for reconsideration is possible, but courts are reluctant to do so in most cases, so let’s hope this is the end of the road. If it is, the Delaware Riverkeeper’s efforts to employ the Environmental Rights Amendment to beat communities “into submission to gentry class no-growth special interests” are dead.