The Delaware Riverkeeper, which says it does no grass-roots lobbying, is engaged in exactly that, opposing making critical infrastructure vandalism a crime.

The Delaware Povertykeeper a/k/a Riverkeeper, the last time it filed a 990 return, told the IRS it does zero grass roots lobbying, not one whit of it. Earlier this week, though, they engaged in precisely what the IRS defines as grass roots lobbying, broadcasting an appeal to their supporters to oppose a bill in the Pennsylvania legislature that would define and penalize critical infrastructure vandalism.

I’d say that means the Povertykeeper is not only potentially violating tax-exemption rules by doing grass-roots lobbying it swears it doesn’t do, but is also, by default, lobbying for the unrestricted right of her band of fractivists to engage in critical infrastructure vandalism. That’s only my personal opinion, of course, but you be the judge of the facts.

Now, take a look at what the Povertykeeper sent out earlier this week: 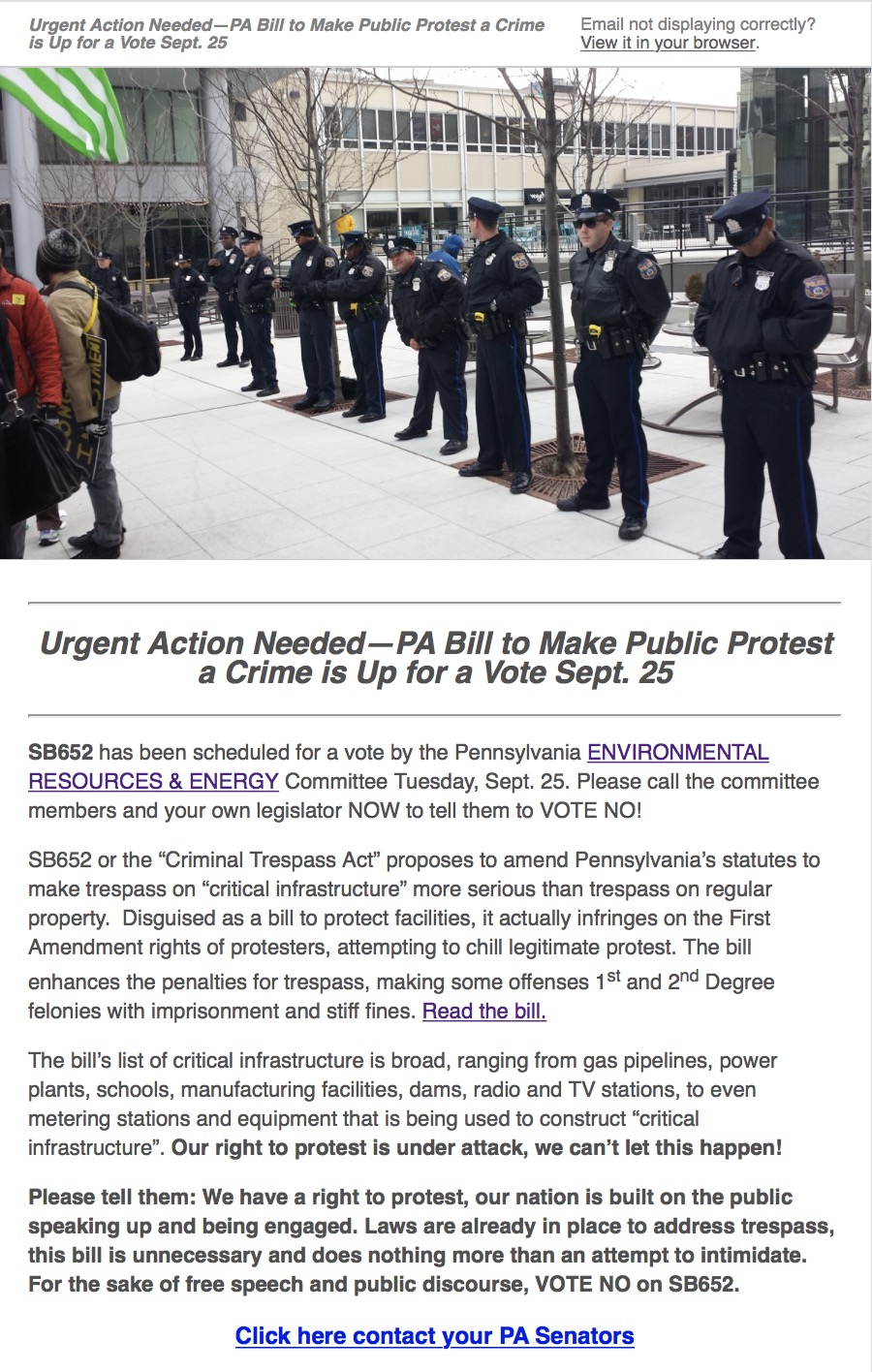 There can, from the “urgent action” messaging to the instructions what to do, be no doubt whatsoever this is grass roots lobbying. The Povertykeeper, of course, has the right to do a certain limited amount of such activity, but it last reported to the IRS that it does absolutely none of it, which is an indication of just how much respect the organization has for the rule of law. Zero. None whatsoever.

That complete lack of respect is also revealed in what the Povertykeeper tells its supporters to oppose; a bipartisan piece of legislation that says this:

A person commits an offense if the person…enters or attempts to enter property containing a critical infrastructure facility, knowing that the person is not licensed or does not have the permission of the owner or lawful occupant of the property to do so [or] enters property containing a critical infrastructure facility with the intent to willfully damage, destroy, vandalize, deface, tamper with equipment or impede or inhibit operations of the facility.

“Critical infrastructure facility.” Any of the following, whether constructed or under construction, if completely enclosed by a fence or other physical barrier that is obviously designated to exclude intruders or if clearly marked with a sign or signs posted on the property that are reasonably likely to come to the attention of intruders and indicate that entry is forbidden without site authorization if notice requirements are not necessary during obvious and apparent construction or for a pipeline to the extent that it is marked by a pipeline marker:

(1) A petroleum or alumina refinery.

(10) A gas processing plant, including a plant used in the processing, treatment or fractionation of natural gas or natural gas liquids.

(11) A transmission facility used by a federally licensed radio or television station.

(12) A steelmaking facility that uses an electric arc furnace to make steel.

(14) A dam that is regulated by the Federal or State government.

(15) A natural gas transmission or distribution utility facility, including, but not limited to, pipeline interconnection, a city gate or town border station, metering station, aboveground piping, a regulator station and a natural gas storage facility.

(16) A crude oil or refined products storage and distribution facility, including, but not limited to, a valve site, pipeline interconnection, pump station, metering station, belowground or aboveground pipeline or piping and truck loading or offloading facility.

(19) Pipelines used to transport natural gas, oil or refined products, whether buried or above ground.

(20) Equipment and machinery, regardless of location, to the extent that it is used to construct, maintain or operate a critical infrastructure facility.

The Povertykeeper opposes this legislation because it says it “infringes on the First Amendment rights of protesters, attempting to chill legitimate protest.” Are we to conclude from this that a person who “intentionally or recklessly damages, destroys, vandalizes, defaces or tampers with equipment” connected with a pipeline is somehow engaging in legitimate protest? That seems to be what the Povertykeeper would have us believe, because that’s what this legislation will penalize if finally enacted. It doesn’t restrict the right to protest at all, in fact. It simply says protesters can’t vandalize and call it protest.

This is the upside down world of fractivism, where those attempting to intimidate by damaging, destroying or vandalizing the property of others label legitimate attempts to restrain this lawless activity as intimidation, where the legitimate is called the illegitimate. The Povertykeeper, like ally Bill McKibben, loves a little violence on the side. That’s what this is all about. The rule of law and a line of police officers protecting property are the enemy as far as they’re concerned.