Deep Green Resistance types are manipulating courts in what are naked attempts to impose their own political wills upon civil society so as to destroy it.

Deep Green Resistance—a global support center for the most violent eco-terrorists on the planet—is a big supporter of the “climate necessity defense” movement.

In their violent manifesto, “Decisive Ecological Warfare,” they describe (and endorse) a not-too-distant future where “well-organized underground militants would make coordinated attacks on energy infrastructure around the world,” while “aboveground activists … push for acceptance and normalization of more militant ad radical tactics where appropriate.”

The aboveground activists “vocally support sabotage when it occurs,” DGR wrote. “They argue that sabotage would not be necessary if civil society would make a reasonable response to social and ecological problems … [T]hey argue that the situation is serious enough to make such action legitimate, even though they have personally chosen a different course.” (Emphasis added.)

And it’s not just rhetoric. Deep Green Resistance is actively involved in the necessity-defense movement.

The world was first introduced to Bucci when he was arrested for blocking construction of the Algonquin pipeline in Montrose, New York in 2015. He and his co-conspirators—collectively known as the “Montrose 9”—committed their crimes in hopes of becoming the first climate activists permitted to use the necessity defense at their trial.

The judge denied their request, found them all guilty of disorderly conduct and sentenced each of them to a 12-month conditional discharge, community service, and fines and fees totaling $350.00. Finding this punishment “very harsh,” Bucci wrote a letter to the judge vowing to “continue our resistance efforts in an even more concerted way — disrupting the fossil fuel industry and perhaps breaking the law whenever necessary.

“We need to act powerfully and intelligently to dismantle entrenched systems of oppression,” he wrote. “We will need to be smarter and even more militant, not less so.”

According to the Deep Green Resistance website, “We engage in aboveground campaigns using whatever nonviolent tactics will be most effective in any given situation.”

However, they continued, “It is our understanding, given the timeline we face and the numbers we have, that aboveground work will not be enough to dismantle civilization … Because of this, we focus all of our work here: on the need for a militant underground to physically dismantle the infrastructure of these systems and stop perpetrators from continuing their crimes. We work to build a culture that normalizes and promotes militant resistance.” (Emphasis added.)

The New York DGR chapter takes an equally “sorry, not sorry” approach to aiding and abetting the violent dismantling of global civilization admitting, “Our work is focused on dismantling industrial infrastructure … DGR NY is an aboveground organization, but we are unique in our support for smart and strategic underground resistance. Part of our work as the aboveground is to normalize this decisive action.”

They certainly do walk the walk.

If you go to their site and search “climate change” under the header “The Problem: Civilization,” you will be directed to a link that features a highly detailed map of the “NY Natural Gas Infrastructure.” 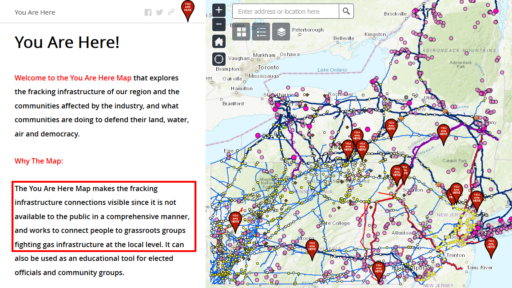 This map, the site explains, “makes the fracking infrastructure connections visible since it is not available to the public in a comprehensive manner, and works to connect people to grassroots groups fighting gas infrastructure at the local level.” (Emphasis added.)

The site promises to “Show you how the pipelines are connected, define the parts of fracking infrastructure, [and] engage you with maps that are fully interactive … zoom, click and explore!” Or, if you’re a militant activist determined to dismantle New York’s energy infrastructure, the map could help you explore, click, boom!

It’s unlikely that supporters of the necessity defense will ever convince a jury that the threat of climate change justifies the total destruction of modern civilization. But every necessity defense trial that “normalizes” violent action takes civilization one step closer to that dystopian goal.

Editor’s Note: This story immediately draws comparisons with the activities of the Community Environmental Legal Defense Fund (CELDF). This is no coincidence, as Derrick Jensen, the leader of Deep Green Resistance sits on the CELDF advisory board. So does Josh Fox. And, groups such as the Delaware Povertykeeper a/k/a Riverkeeper are happy to append their names with Deep Green Resistance on various fractivist petitions. They’re all enablers of violence.