Deep Green Resistance is too frequently dismissed as a fringe group not warranting our time but a close examination shows just the opposite. It’s dangerous.

“When civilization ends, the living world will rejoice. We must be biophilic people in order to survive.”

Know thy enemy. And, beware of organized violence against modern living.

With the Green New Deal (GND), the enemies of mineral energies and of modern living are at the door. And, one spinoff is Deep Green Resistance. 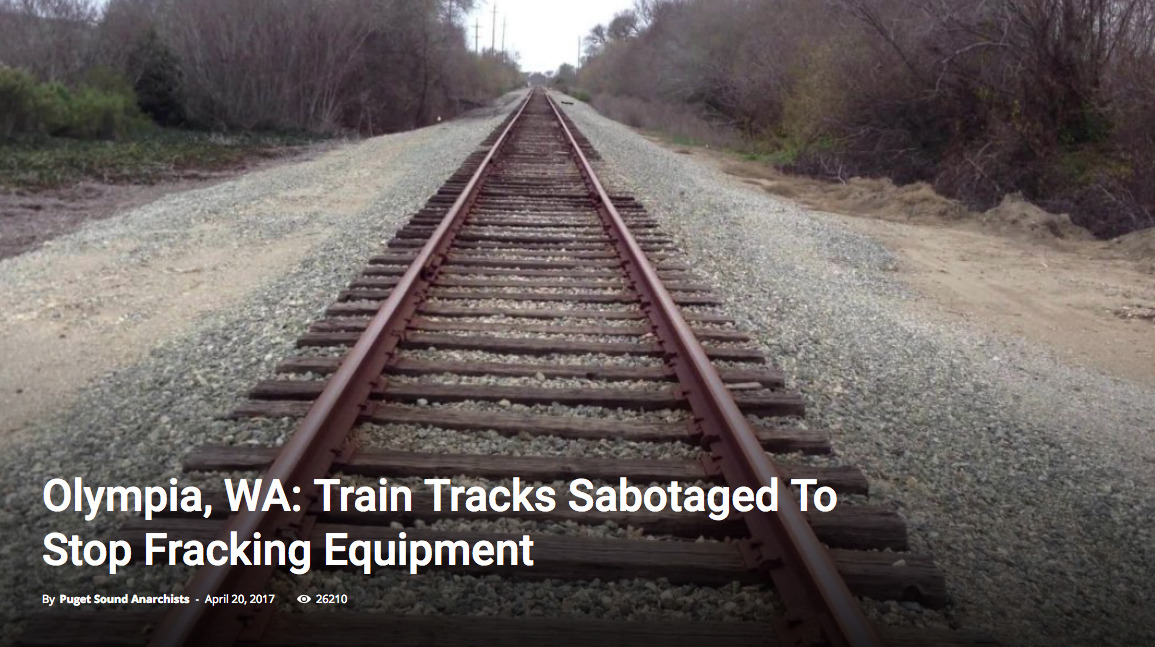 An example of the work of a Deep Green Resistance affiliate

Here is the self-described mission of the Deep Green Resistance (DGR) in their own words. More information is available at their website but, be warned: it is scary stuff. (Emphasis added.)

What Is Deep Green Resistance?

DGR is an aboveground organization that uses direct action in the fight to save our planet. We also argue for the necessity of an underground that can target the strategic infrastructure of industrialization. But these actions alone are never a sufficient strategy for achieving a just outcome. Any strategy aiming for a livable future must include a call to build direct democracies based on human rights and sustainable material cultures.

Which means that the different branches of a resistance movement must work in tandem: the aboveground and belowground, the militants and the nonviolent, the frontline activists and the cultural workers. We need it all.

And we need courage. The word “courage” comes from the same root as coeur, the French word for heart. We need all the courage of which the human heart is capable, forged into both weapon and shield to defend what is left of this planet. And the lifeblood of courage is, of course, love.

So while DGR is about fighting back, in the end this organization is about love. The songbirds and the salmon need your heart, no matter how weary, because even a broken heart is still made of love.

They need your heart because they are disappearing, slipping into that longest night of extinction, and the resistance is nowhere in sight. We will have to build that resistance from whatever comes to hand: whispers and prayers, history and dreams, from our bravest words and braver actions.

It will be hard, there will be a cost, and in too many implacable dawns it will seem impossible. But we will have to do it anyway. So gather your heart and join with every living being. With love as our First Cause, how can we fail?

Will Green Technology Save the Planet?

No. Wind turbines, solar PV panels, and the grid itself are all manufactured using cheap energy from fossil fuels. When fossil fuel costs begin to rise such highly manufactured items will simply cease to be feasible.

Solar panels and wind turbines aren’t made out of nothing. They are made out of metals, plastics, and chemicals. These products have been mined out of the ground, transported, processed, manufactured. Each stage leaves behind a trail of devastation: habitat destruction, water contamination, colonization, toxic waste, slave labor, greenhouse gas emissions, wars, and corporate profits.

The basic ingredients for renewables are the same materials that are ubiquitous in industrial products, like cement and aluminum. No one is going to make cement in any quantity without using the energy of fossil fuels. And aluminum? The mining itself is a destructive and toxic nightmare from which riparian communities will not awaken in anything but geologic time.

From beginning to end, so called “renewable energy” and other “green technologies” lead to the destruction of the planet. These technologies are rooted in the same industrial extraction and production processes that have rampaged across the world for the last 150 years.

We are not concerned with slightly reducing the harm caused by industrial civilization; we are interested in stopping that harm completely. Doing so will require dismantling the global industrial economy, which will render impossible the creation of these technologies.

Aren’t renewable energies like solar, wind, and geothermal good for the environment?

No. The majority of electricity that is generated by renewables is used in manufacturing, mining, and other industries that are destroying the planet. Even if the generation of electricity were harmless, the consumption certainly isn’t. Every electrical device, in the process of production, leaves behind the same trail of devastation. Living communities — forests, rivers, oceans — become dead commodities.

The emissions reductions that renewables intend to achieve could be easily accomplished by improving the efficiency of existing coal plants, businesses, and homes, at a much lower cost. Within the context of industrial civilization, this approach makes more sense both economically and environmentally.

That this approach is not being taken shows that the whole renewables industry is nothing but profiteering. It benefits no one other than the investors.

Renewable energy technologies are better than fossil fuels in the same sense that a single bullet wound is “better” than two bullet wounds. Both are grievous injuries.

Do you want to shoot the planet once or twice?

The only way out of a double bind is to smash it: to refuse both choices and craft a completely different path. We support neither fossil fuels or renewable tech.

Even this bullet analogy isn’t completely accurate, since renewable technologies, in some cases, have a worse environmental impact than fossil fuels.

Only about 25% of global energy use is in the form of electricity that flows through wires or batteries.  The rest is oil, gas, and other fossil fuel derivatives. Even if all the world’s electricity could be produced without carbon emissions, it would only reduce total emissions by about 25%. And even that would have little meaning, as the amount of energy being used is increasing rapidly.

It’s debatable whether some “renewables” even produce net energy.  The amount of energy used in the mining, manufacturing, research and development, transport, installation, maintenance, grid connection, and disposal of wind turbines and solar panels may be more than they ever produce; claims to the contrary often do not take all the energy inputs into account.  Renewables have been described as a laundering scheme: dirty energy goes in, clean energy comes out.

Biofuels, another example of “green tech”, have been shown to be a net energy loss in almost every case. Those biofuels that do produce net energy produce an exceedingly small amount. These fuels are often created by clearing natural ecosystems such as tropical rain forests or prairies for agricultural production, a process which releases even more greenhouse gases, reduces biodiversity, and reduces local food availability. Biofuel production is considered a major factor in rising food prices around the world in recent years. These rising food prices have led to widespread starvation, unrest, and violence.

Some people like to promote hydroelectric energy as a source of “green power.” This is false. Dams have enormous environmental impacts on rivers, beaches, and estuaries. Beyond these impacts, many dams are a large source of methane gas due to decomposing organic matter at the bottom of the reservoir. Methane from hydroelectric dams may be responsible for 4% or more of global warming.

Washington-DC environmentalists pretend that their favored renewables are clear ecological winners compared to natural gas, coal, and oil. Wind and solar power are not, for reasons given by the Deep Green Resistance. Still, the DGR is a fringe, violent, deep-ecology outfit that must be watched closely. They are not so much anti-energy as anti-human life.

Editor’s Note: It’s pretty fascinating that a group committed to the very destruction of civilization itself also sees through the fallacy of renewables. The point, though, is that no one is safe from the antics of Green Deep Resistance types. And, don’t think they’re not connected to other supposedly less extreme groups who have made enormous headway in some communities. Indeed, Derrick Jensen, the author of the Deep Green Resistance Book serves on the Board of Advisors of the Community Environmental Legal Defense Fund (CELDF) that we have profiled here numerous times and which has led many a community down the primrose lane to disaster. He serves there along with Josh Fox, Karenna Gore and Jerry Greenfield (of Ben & Jerry’s fame).

8 thoughts on “Deep Green Resistance: The Group That Wants to End Civilization”