Deep Green Resistance is both radical and dangerous and it’s made alliances with the favorite fractivist shills of a supposedly respectable gentry class.

Deep Green Resistance is a very dangerous organization. The group’s operation manual, “Decisive Ecological Warfare,” is a diatribe on how to “disrupt and dismantle industrial civilization.” Among the strategies for doing so is “engag[ing] in direct militant actions against industrial infrastructure, especially energy infrastructure.” The whole enterprise is “aimed at identifying key points and bottlenecks in the adversary’s system (electrical, transport, financial, and so on) and engaging them to collapse those systems or reduce their functionality.” Deep Green Resistance is radically opposed to civilization as we know it and it has friends in strange places.

Deep Green Resistance is Derrick (not Derek, as typically spelled) Jensen’s group. I wrote about him last year here in relation to his role, along with Josh Fox and Jerry Greenfield (of Ben & Jerry’s) as advisors to the radical CELDF. I wrote about him again last month, noting the following:

These are hard-core extremists; dangerous narcissists with no souls. They do, in fact, advocate violence toward human beings and, of course, there’s always the collateral damage which they’re quick to excuse. They say, in their book Deep Green Resistance “A drop in the human population is inevitable, and fewer people will die if collapse happens sooner.” It’s the “making an omelet requires breaking a few eggs” philosophy that led to the death of tens of millions in the 20th Century. Derrick Jensen, the most prominent of all Deep Green Resistance folks, rationalizes that “No matter what you do, your hands will be blood red…”

Why and I writing about them again? Because this Deep Green Resistance, an admittedly underground group is slowly but surely forging relationships with aboveground groups kindly referred to by an empathetic journalists as merely “environmental activists.” Fractivist organizations are among those being conned. It’s all part of the Decisive Ecological Warfare scheme so nicely captured in this infographic (high-resolution version available here), portions of which are offered below: 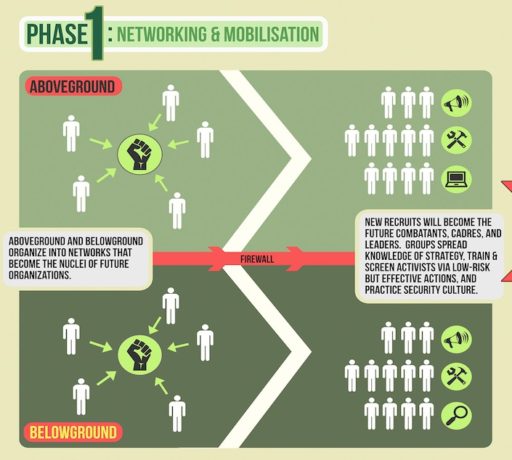 Note the “combatants” language, the firewall and the “practice security culture” (secrecy) advice. 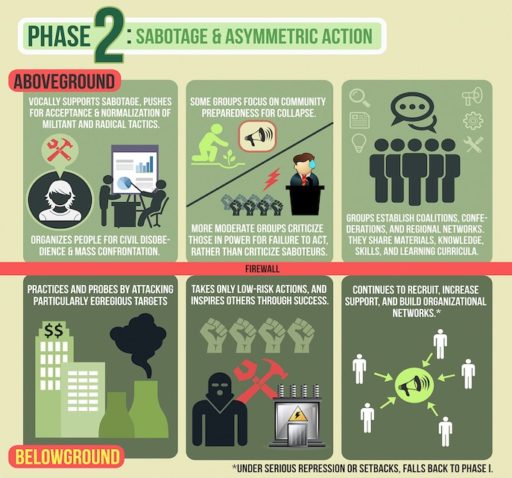 Note the “sabotage” reference, the employment of useful idiot aboveground groups to “vocally support” it and the emphasis on “attacking particularly egregious targets.” 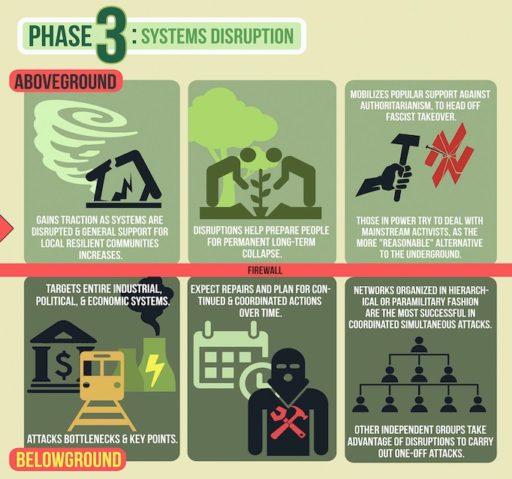 Note the desire for “permanent long-term collapse,” the use of aboveground groups (“mainstream activists”) as “the more ‘reasonable’ alternative to the underground in a good guy, bad guy play and the emphasis on attacking banks, transportation and energy infrastructure. 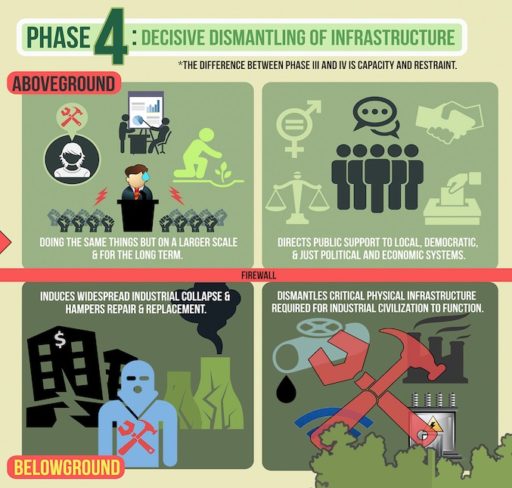 Note the heading of “decisive dismantling of infrastructure,” the emphasis on moving from restraint to full power action, the desire to “induce widespread industrial collapse and hamper repair and replacement” with the ultimate goal of dismantling industrial (that is to say modern) civilization altogether. Also, the hooded destructor in lower left.

This is Deep Green Resistance in all its narcissistic glory. Like two-year olds they desire destruction and the attention it brings and when they can deploy their newly discovered manipulative abilities they are especially happy. Moreover, the aboveground groups being manipulated are like new new-age parents determined to avoid meaningful discipline and instead reward their brats with love only, so they are perfect enablers.

Who are those aboveground enablers? Well, it was less than three weeks ago that the Delaware Povertykeeper (a/k/a Riverkeeper) released and heavily promoted a petition opposing appointments to FERC. Among the “136 environmental and community organizations” supposedly “representing communities in all 50 states,” Maya van Rossum recruited to sign the faux petition was Deep Green Resistance New York. That’s what the William Penn Foundation pays her to do with money inherited from one of the bigger fortunes made in the chemical industry by Rohm & Haas – about as emblematic an example of industrial civilization as could be found. It’s like a ceramic hot dog wrapped in a plastic bun; each calling the other phony and dangerous when, in fact, they’re the same with respect to everything that counts. 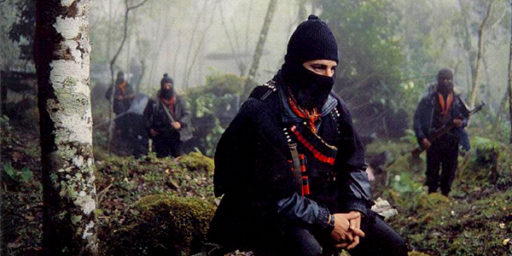 Berks Gas Truth in on that list, too, along with We Are Seneca Lake, the Rockefeller family’s Catskill Mountainkeeper organization, Damascus Citizens for Sustainability, Grassroots Environmental Education, the Responsible Drilling Alliance and Breathe Easy Susquehanna County and dozens of others; all of whom were pleased to put their name right along side Deep Green Resistance.

Likewise, when spoiled children Melissa Troutman and Joshua Pribanic (the trial lawyer’s kid) called for an EPA/DEP investigation they also recruited Deep Green Resistance. Many of the same useful idiots were only too pleased to join their names with the Deep Green Resistance and they were supplemented by Craig Stevens, Susan Van Dolsen (Stop the Algonquin Pipeline Expansion), Ellen Gerhart (the Juniata Watershed People Before Pipelines lady making a martyr of herself with respect to the Mariner pipeline), the Sierra Club, Sam Bernhardt (Senior Pennsylvania Organizer, Food & Water Watch) and Beverly Braverman (Executive Director of Mountain Watershed Association). All saw nothing wrong with being associated with a group calling for destruction of infrastructure as a means to collapse civilization.

Also, when the Park Foundation funded Center for Biological Diversity put together a petition to oppose fossil fuel development on federal lands, it was only too pleased to feature Deep Green Resistance as one of its supporters, along with 350.org, Beyond Extreme Energy, the Coalition Against the Rockaway Pipeline, Environment America, Food & Water Watch (another big Park Foundation funded outfit), Gas Free Seneca, the Ohio Valley Environmental Coalition, New York Public Interest Research Group (NYPIRG), Sustainable Tompkins and RFK, Jr.’s Waterkeeper Alliance. They all agreed to ally themselves with Deep Green Resistance and its cadre of civilization destructors in hoodies and masks.

There’s an absolutely fascinating aspect to all this, though. It has to do with the point at which the useful idiots are able to muster the wherewithal to draw the line at accommodating Deep Green Resistance. It’s illustrated by a group called Stop the Frack Attack. It is an umbrella organization with the following steering committee:

It’s a broad representation of fractivist groups funded by the Haas, Heinz, Park, Rockefeller families, among others, and they actually said NO to Deep Green Resistance. They told the outfit it couldn’t attend the last national conference. Why? Well, it wasn’t, as you might imagine that they had gone a wee bit too far with all that civilization destruction talk or that they opposed blowing up pipelines or derailing trains or any of that stuff. They were down with all that. No, what caused hem to draw a line in the sand was their contention Deep Green Resistance favored a “gender binary.” The story, as told by Deep Green Resistance itself, includes the following:

As radical environmentalists (and radical feminists), we in Deep Green Resistance oppose any and all threats to the future of the planet…

Because of this, we were understandably excited when we saw that Denver would be host to the Stop the Frack Attack (STFA) National Convention this week, and immediately reached out to see about tabling and distributing materials for our organization. Unfortunately, the leaders of STFA made it very clear to us that feminist perspectives are not welcome at their event.

Deep Green Resistance (DGR) is being barred from STFA because, according to the organizers of this conference, we support a “gender binary.” This notion is absurd…

Critics of DGR like to portray us as somehow protecting or defending traditional definitions of gender, but nothing could be further from the truth. Deep Green Resistance encourages and supports anyone who resists the abusive and violent gender system – and the greatest example of such resistance is women saying no to men…

In a world teetering on the brink of destruction, we in Deep Green Resistance are absolutely amazed that an activist would turn his back on a committed environmentalist group solely because that group thinks rape victims shouldn’t have to shower and sleep with men.

Amazing isn’t it? Radicals are, by definition, extreme and, therefore, are seldom able to agree on anything for long, which is what saves civilization from their excesses despite the apathy of so many with respect to their threats. Their threats are real but their tendency toward self-destruction via their quests for purity is our best protector. The only civilization they ever ultimately destroy is that of their own world. Thus it is that I’m less worried about them than the dolts and their special interest funders who unthinkingly ally with Deep Green Resistance. The latter is truly fringe and accomplishes little but the Delaware Povertykeeper, et al, whose voice is magnified by sister entities such as StateImpactPA and who, deep down, shares the same ultimate objectives, is the real threat.