New York State’s Department of Environmental Conservation or DEC, is completely captive to the politics of Governor Andrew Corruptocrat Cuomo and it shows.

New York and New Jersey blocked water permits last week for a $1 billion multistate natural gas pipeline. The Williams Co. was planning to build the Northeast Supply Enhancement pipeline project to expand its existing 10,000-mile interstate transmission pipeline system in New Jersey, New York, and Pennsylvania, which would supply an additional 400 million cubic feet of natural gas per day for New York’s 2021 winter heating season. With one of the Indian Point nuclear units shuttered at the end of April, New York is becoming even more dependent on low-cost natural gas in its generating, residential, and industrial sectors.

But, Cuomo’s Department of Environmental Conservation (DEC) denied a required Clean Water Act certificate for the project because it did not meet the state’s “rigorous water quality standards” and because the project was incompatible with New York’s new climate law, the Climate Leadership and Community Protection Act. Under the law, the state must cut greenhouse gas emissions by 40 percent below 1990 levels by 2030 and 85 percent by 2050. 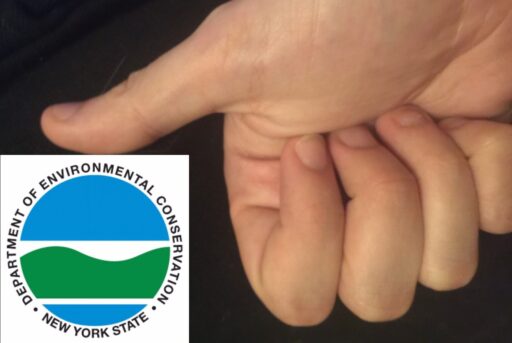 In January, the Federal Energy Regulatory Commission issued a final environmental impact statement for the project, approving it. The statement indicated that the company must lay about 24 miles of 26-inch pipe underwater in New York and New Jersey waters.

National Grid, the utility serving Long Island and New York City, indicated that the pipeline is the most reliable option to meet the growing demand from new construction and buildings switching from oil to natural gas over the next 15 years. The utility, however, was forced to identify other options in a report and suggested trucking in more gas and upgrading an existing pipeline system. That report’s alternative options were part of an agreement between National Grid and Governor Cuomo, who had threatened to revoke the company’s operating license over its suspension of new natural gas hookups near New York City. National Grid had originally insisted that it could not meet demand for new hookups without the pipeline, but backtracked due to pressure from the governor, who regulates them via several state agencies.

DEC cited National Grid’s report in its decision, as well as the potential need for Williams Co. to bury the pipeline six feet deeper than in its analysis, in order to accommodate transmission cable for future offshore wind in the area. According to the DEC, the construction of the pipeline would re-suspend contaminants such as mercury and copper, and harm clams and other shellfish beds. As mentioned above, it also cited the new climate law, which lets state agencies consider emissions in issuing permits, licenses, and other administrative approvals and decisions.

New York DEC has been administratively blocking natural gas pipelines since 2016. Under the new law, a New York governor can:

The New Jersey Department of Environmental Protection denied the project because New York was the ultimate beneficiary of the project and had decided to pursue alternatives, so in their view, there was no compelling public need for the pipeline. Without New York’s approval, the company’s application for permits from New Jersey was “effectively moot,” they argued.

If National Grid’s alternative is applied, the administration and local officials will have to deal with new trucked gas supplies and associated infrastructure, as well as the risk for supply disruptions and moratoria in the future. It will also require permits and agreements for new liquefied natural gas infrastructure. Mayor Bill de Blasio has indicated that he will not support new gas supplies for the city but has not provided an alternative such as a requirement that new construction be electric, which would reduce demand for direct use of natural gas, but would require electricity increasingly generated from natural gas until New York’s goals for renewables are met.

Environmentalists want National Grid to close its forecasted supply-demand imbalance with energy efficiency measures, demand response (where some customers would switch to oil on the coldest days) and electric heating, which could be more costly than the proposed infrastructure solutions. Note that those options are the only way to support state emissions reduction goals.

New York and New Jersey denied Williams Co. the permits needed to construct a national gas pipeline under water from New Jersey to New York. National Grid indicated that the pipeline would be the most reliable way to meet future demand for natural gas from new construction and as buildings move from oil to natural gas. Besides providing low-cost natural gas for New York’s residents, the pipeline’s construction would have generated economic activity in Pennsylvania, New Jersey and New York and would have directly and indirectly supported more than 3,000 jobs during the construction period.