[Editor’s Note: The IER’s Alexander Stevens critiques an article about dead industrialists, pointing out it’s a case of projection, accusing others of one’s own crimes.]

Scott Waldman at E&E News recently wrote an article arguing that a group of “dead industrialists” are responsible for funding “climate denialism” among free market groups in the United States. The article focuses on three foundations that have donated to organizations that generally promote a free market approach to energy and the environment. 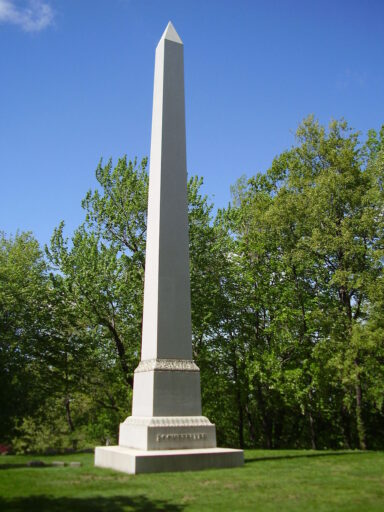 The gravesite of dead industrialist John D. Rockefeller in Cleveland, Ohio. Trust-funder descendants spend his money fighting oil and gas along with prosperity, seeking to create strategic preserves as pastoral as this scene around themselves.

“Foundations formed by now-dead industrialists have been instrumental in promoting rollbacks of regulations that protect the public from deadly air pollution and spreading misinformation around climate science. Fueled by hundreds of millions of dollars in assets, the foundations have supported groups that worked with the Trump White House to roll back vehicle emissions standards and to ease restrictions on power plant pollution and water protections, public tax filings show. They have quietly funded presidential advisers who worked to conduct a hostile White House review of climate science and to restrict EPA’s use of scientific research when crafting public health protections.”

The article relies heavily on quotes from Drexel University sociologist Dr. Robert Brulle who has previously accused the fossil fuel industry of using “outsize economic and cultural power to distort the public debate by introducing falsehoods.” Dr. Brulle seems to think that people donating money to support a different perspective on energy and the environment is somehow dangerous.

What Dr. Brulle and many others often insinuate is that the only reason anyone would dissent from the progressive orthodoxy on these issues is because of the financial support provided by these foundations. As we have explained in the past, Brulle’s narrative doesn’t stand up to scrutiny. When we actually examine the amount of funding flowing to organizations working on energy and environmental issues, the environmental left looks less like David and their opponents look less like Goliath.

In the recent E&E article, Brulle is quoted arguing that the foundations that support different perspectives on energy and environmental policy are “unaccountable” and that they offer a way for “dead industrialists to transfer economic power into cultural and political power that can last in perpetuity.”

This is a rather amusing statement because the vast majority of the green movement’s funding comes from the exact sort of foundations that Brulle is so concerned about. IER recently updated our Big Green Inc. project, which offers some insight into the influence that “dead industrialists” have on supporting the green movement:

Of course, the green movement also benefits from the wealth of people who are still alive today.

In total, IER’s Big Green Inc. project has documented well over $5 billion dollars flowing from 17 foundations to hundreds of environmental groups from 2008 to 2017. Of course, this represents only a small fraction of the amount of money that environmental groups have received over the years as there are hundreds of similar foundations that provide billions of dollars in support for the green movement.

These foundations seem to largely favor progressive environmental policies, which do little to actually protect the environment, and instead, raise regulatory costs and serve as barriers to entry to protect established players. So if Dr. Brulle wants to suggest that we should be concerned about the influence of “dead industrialists” on today’s debates over the environment, we’re not going to stop him.

[Editor’s Note: This couldn’t more correct. Scott Waldman is a decent guy and I’ve corresponded with him on various occasions about New York fracking issues. I’ve written about him, too, in this post. He’s also a knowledgable fellow and knows exactly of what Alexander Stevens writes above. He’s completely aware of the role the trust-funder descendants of Roy Park, John and William Rockefeller, Howard Heinz, Otto Haas and other dead industrialists in funding outrageous fractivist opposition and stunts. The fact he chooses to ignore what he knows and focus only on dead industrialists funding stuff he doesn’t like tells us he and/or E&E News have an agenda.]