Andrew Cuomo’s Start-Up NY program might better be called Dead-End NY for all the good it’s done; a lousy 722 jobs for a taxpayer rip-off of $59 million.

“An upstate jobs ticket to hell” was how I described Start-Up NY last year, noting it was Governor Corruptocrat’s “Rube Goldberg strategy to use other people’s money” to create upstate jobs after the NRDC gang told him he couldn’t frack. They’ve since told him he can’t allow pipelines either. Back in July, after spending tens of millions on advertising, Start-Up NY had created slightly over 400 jobs, less than half what little Susquehanna County, Pennsylvania gained by simply allowing fracking and getting out of the way.

Now, after almost another year, things appear to have gone from bad to worse, so bad in fact, Empire State Development tells us next to nothing anymore, apparently hoping lack of data will, at least, dampen bad news coverage. Unfortunately for Dead-End NY, others are noticing anyway. The journal amNewYork, for example, just did an editorial calling out Corruptocrat’s budget for now including language that ends the requirement to report job creation connected with the program. Don’t like the numbers? Just make them go away. Others still, collect data, though, and the evidence for Dead-End NY is irrefutable.

A rapidly aging, and increasingly angry, Andrew Cuomo, shows the frustrations connected with his failed policies.

Here’s some of what the amNewYork editorial had to say (emphasis added):

Specific disclosure requirements were eliminated from the state budget, and it’ll take legislation to restore them.

Start-Up NY offers a decade of tax breaks to fledgling and expanding businesses located near college campuses, in exchange for the promise of thousands of new jobs.

But the effort has been an expensive one. Beyond $6 million in tax breaks, the state spent $53 million just on advertising for Start-Up NY, which began in 2014. And so far, job creation has been relatively slow. By the end of 2016, NYC had 23 Start-Up companies that promised 449 jobs over five years. After two years of the program, those companies added just 92 net new jobs. Statewide, there’ve been 722 net new jobs, and a promise of 3,324.

How will we know whether the program meets its targets?

Not much, it would seem, but the evidence Dead-End NY isn’t working anywhere close to what fracking and pipelines would do for Upstate is everywhere. Consider these charts from the “New York State Economic Indicators Dashboard” published by none other than Empire State Development: 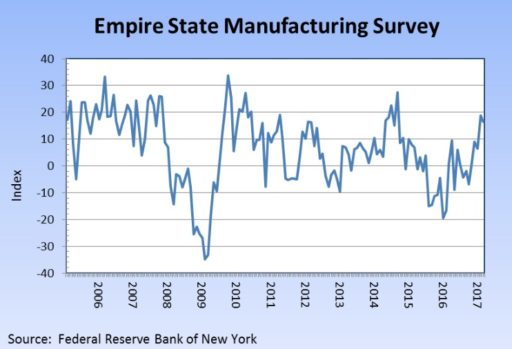 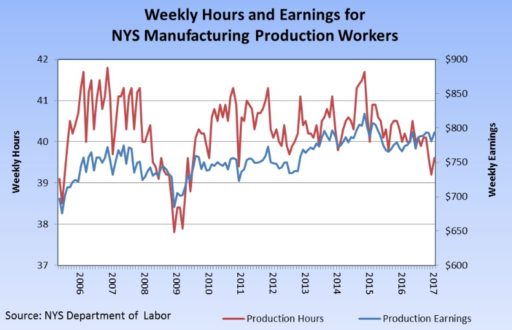 Compare where the New York stood in 2010 when Corruptocrat ascended to Emperor of the Empire State to now. Both the Manufacturing Index and manufacturing production hours have declined significantly. It’s likewise for the value of exports.

Now, let’s go to the source of the data for the first chart; the Federal Reserve Bank of New York and their May, 2017 “Empire State Manufacturing Survey.” Here’s the money chart:

This chart illustrates the Federal Reserve’s analysis of general business conditions in the Empire State and they’re right where they were in 2008 during the middle of the last economic recession, which is often referred to as the “Great Recession.” Whether it was or wasn’t “Great” is beside the point because New York State, under Andrew Corruptocrat Cuomo is in what I will call the Great Doldrums, trending water and slowly sinking over time. Upstate New York has no future without fracking, pipelines and a shaking loose of the ties the bind it as Cuomo has forced it to walk the plank of political correctness imposed by the NRDC gang.