Day two of the Tony Ingraffea testimony in the trial of the Dimock plaintiffs against Cabot Oil and Gas saw the slippery one’s credibility falling to pieces.

Tony Ingraffea is as slippery a speaker as one can imagine; a true believer wrapped in the garb of science for purposes of selling a message. His second day of testimony, though, in the Scott Ely, et al vs. Cabot case put forth by the last of the Dimock plaintiffs saw slippery Tony the Tiger start to fall to pieces as Cabot attorneys elicit one admission after another from him. It was, in the words of one landowner observer, a case of a plaintiff digging their own hole before the defendants even put on witnesses. 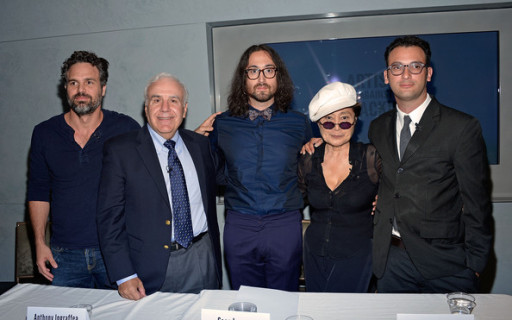 Tony Ingraffea and activist friends at Artists Against Fracking event

Tuesday’s cross-examination of Tony Ingraffea (pictured above with Artists Against Fracking who he serves as “Scientific Consultant”) was a long series of admissions by fractivism’s favorite expert, including the following revelations:

It was like this throughout and then Dillard introduced one of the photos of a grinning Tony Ingraffee with Mark Ruffalo, Sean Lennon and Yoko Ono to confront the Tiger with evidence in stark contrast to his statement he did not “purposely attend any or participate in any activist rallies or activities.”  It spoke for itself. leaving Dimock plaintiffs’ attorney Leslie Lewis to simply utter “It is what it is.” That’s about right as photo told everyone in the courtroom what Tony Ingraffea is really about.

Dillard also introduced a photo of Ingraffea at a Nanticoke event of a few years ago (where I first saw Tony in action) with anti-fracking signage prominently displayed behind him. Here’s a video of the event and it’s a prime example of how Tony the Tiger operates as he moves from talking about engineering to influence peddling (his own description at 2:09) and opines on issues far outside his areas of expertise.

Tony argued it was “a deceptive photograph in the sense that the podium is a long distance away from those frack signs which were inside the door.” Well, it’s all here. You be the judge if that’s a pathetic use or not.

Likewise, Tony rationalized the photo of himself with Ruffalo, Lennon and Yoko as three activists and their “scientific consultant.” It was the low point of the day for the Tiger, the point at which he descended into absurdity in the way of excuses for his obvious activism. It didn’t pass the laugh test, nor did Tony’s statement that his personal opinions had no influence on his positions with respect to the matters under trial.

His description of his PSE Healthy Energy organization was little better:

To locate and disseminate the best vetted information  available to all stakeholders concerning all issues with relationship to human health and the environment pertaining to all energy sources.

Contrast this with Tony’s video description on the group’s website:

Notice the entire focus of this description of PSE by him is all about oil and gas with the most revealing words coming at 2:51 when he says this:

What PSE will continue to do is what it has in the past, which is to say “no,” loudly and clearly, and with vetted informational background, to those forms of energy that are just not worth it.

By that he means oil and gas, of course, and proceeds to argue for them to be “wound down.” No activism there, right?

That’s how it went – how the greased pig, a/k/a Tony the Tiger, was finally trapped in the corner of the pen he built for himself and caught.

13 thoughts on “Day Two of Tony Ingraffea: Falling to Pieces”