A group called Rising Tide North America is behind some DAPL vandals. Both the Tides Foundation and the Levinson Foundation are in the background paying.

The Argus Leader carried a remarkable story the other day about two Dakota Access Pipeline or DAPL vandals who were arrested for sabotaging the pipeline by using oxy-aceytlene cutting torches to cut through steel valves. The two perpetrators, both Iowa women, were quite proud of their dirty work, self-empowered by a naive sense of moral superiority (mother’s milk to all useful idiots) and what can only be described as the arrogance of indignant high schoolers. It tells us a lot about what motivates these radicals and none of it’s good. Even worse are those who fund and manipulate them. 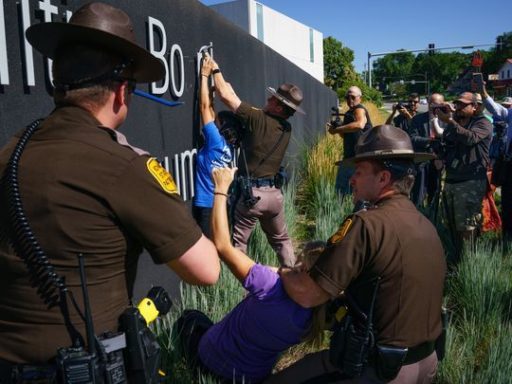 Here are the basics from the Argus Leader (emphasis added):

Two women who admitted to vandalizing the Dakota Access Pipeline during a press conference in Iowa on Monday are also suspects in pipeline incidents in South Dakota, authorities said Tuesday.

Des Moines residents Jessica Reznicek, 35, and Ruby Montoya, 27, were taken into custody Monday in Polk County, Iowa as they pried letters from an Iowa Utilities Board sign.

The duo read a statement claiming responsibility for acts of pipeline sabotage incidents along the route, which runs from the Bakken oil patch in North Dakota to Patoka, Illinois.

“After the success of this peaceful action, we began to use this tactic up and down the pipeline, throughout Iowa (and a part of South Dakota), moving from valve to valve until running out of supplies, and continuing to stop the completion of this project,” Montoya said…

Alex Cohen of the Earth Defense Coalition, a spokesman for Montoya and Reznicek, said the women were still in custody as of Tuesday afternoon and that they haven’t been charged with offenses beyond a misdemeanor for damage to the Iowa Utilities Board sign.

“Since their statement, there haven’t been any additional charges, but they’re definitely expecting some,” Cohen said.

Cohen said the women plan to represent themselves in court.

Montoya and Reznicek are part of the Catholic Workers Movement, and they said Monday that their actions were meant as a nonviolent response to unresponsive regulators, elected officials and media.

They continued to hone their skills, targeting valves along the pipeline route. They encouraged others to follow their lead during their press conference Monday.

“We feel we have nothing to be ashamed of,” Montoya said. “For some reason the courts and ruling government value corporate property over our inherent human rights to clean water and land.”

The shallow infantile reasoning of these two speaks for itself. I suspect most readers will share my view that appropriate punishment is something on the order of 10 years hard labor cutting firewood with handsaws to keep themselves warm. Nonetheless, I am far less concerned with these two self-righteous malcontents than those behind them; the people encouraging them and other DAPL vandals and sponsoring similar acts of sabotage against other pipelines.

Nearly every such act is aided and abetted by the moral and financial support of others who go to great lengths to hide their involvement. Take, for example, the spokesperson for  these two DAPL vandals; a fellow named Alex Cohen of the Earth Defense Coalition. If you go to this organization’s website and its About page, you’ll learn next to nothing about them other than the fact they are profoundly radical. The Home page says this:

If you’re Not Resisting…

(To the best of your human ability)

Then You’re Liable For…

Not a lot here either other than a window into the souls of those who want the world as we know it to burn so they can rebuild it in their own image. The Contact Us page, though, is one place on the website offering a bit of transparency; it provides a phone number for Alex. Google that number (314-971-6304) and you quickly learn both Alex Cohen and Ruby Montoya (one of the two DAPL vandals arrested) are listed as contacts for another amorphous radical group known as Rising Tide North America.  The Earth Defense Coalition appears to be little more than one of a collection of aliases used by Rising Tide; a tactic common with fractivists and other radicals

Rising Tide says it does “direct action…to confront the root causes of climate change…out of the conviction that corporate-friendly ‘solutions’ to climate change will not save us and that most government efforts are half-measures at best.” We know what that means, of course, and it’s anything but peaceful or non-violent, as they would have the naive believe. The DAPL vandals were simply pursuing that mission.

Rising Tide also claims to have an EIN number for purposes of helping other groups secure tax-exempt donations, but there is no organization of that name listed on Guidestar, for example, where virtually every such entity can normally be found. Further searching, though, revealed this:

Recently RTNA received a grant from the Max and Anna Levinson Foundation to redistribute the funds to grassroots groups working within the climate justice and climate movements.  Rising Tide decided that the best way to do this was to open an application process for Rising Tide network groups and frontline community members to directly ask for microgrants to fund local, regional, or national projects. Providing  “no strings attached” funding is one of the needed elements of empowering local communities to develop fights that reflect their needs and issues, as well as helping to provide a foundation for local  direct action organizations and frontline voices.

The Levinson Foundation, in other words, is giving Rising Tide North America “no strings attached” money to finance more DAPL vandals. Except for its radicalism, it is, like its grantees, anything but transparent, a fact noted by Inside Philanthropy. A review of its latest 990 return (fiscal year ending May 31, 2014) indicates a $30,000 payout to an entity listed as “Media Island Institute” at 268 Bush Street, San Francisco, for the “Rising Tide campaign.” The group actual name is Media Island International and it is a fiscal sponsor for radical groups such as Rising Tide North America; a pass-through entity for purposes of tax-exemption and another degree of separation for funders such as the Levinson Foundation.

The Levinson Foundation is thus spending yet another one family fortunes ways intended to assuage the guilt of subsequent generations for having done so undeservedly well as a result of their ancestor’s success. It is run by grandchildren of the man who made the fortune; Max Levinson. It is said he was a prominent Philadelphia businessman and the founder of the Merit Oil Company.

Such is the irony of so many fractivist campaigns. Like the Rockefellers, the latter Levinsons want to prove their worth and independence by demonstrating they possess superior values to the old man who made the money and they intend to do it by spending the money he left to charity on their own causes and in such way as to not impose on the pampered lifestyles he left them. Funding DAPL vandals simply follows the trust funder rulebook.

The Levinson Foundation is the only one doing it, either. The Tides Foundation 990 return for 2014 also shows a $40,771 grant to Rising Tide North America (through Media Island International) for “general support.” Tides, of course, is one of the vehicles used by Teresa Heinz Kerry to pass through money from her first husband’s fortune. It is, essentially, another money laundering group to finance activities such as those of the DAPL vandals. It is how fractivism is done. Trust fund money is behind every bit of it, passed down through layers of non-transparent organizations to the useful idiots who imagine it’s all their idea. Watch the short video below for an illustration of what the Levinson and Tides money has bought: