[Editor’s Note: Andrew Cuomo is corrupt and the whole world now knows it. The Cuomo revelations tell us it is time to re-examine his fracking ban.]

It’s out now, The narcissistic ways of the king have been revealed, showing that, all along, he was naked as his wardrobe falls to the floor. The untouchable crime czar is touched in more ways then one. Andrew Cuomo the all powerful God of the left, has done himself in. Finally, we find gold in that which is COVID, gold in the form of grevious Cuomo revelations. 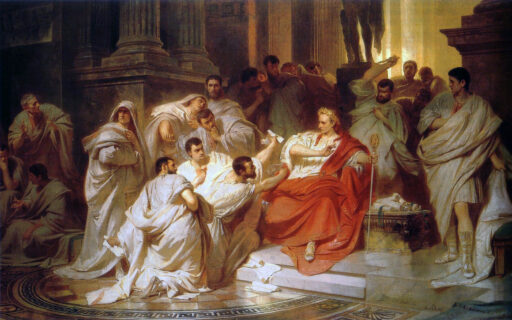 The Senators and “Brutes” attacking Julius Caesar in the “Temple” {Temple of Caesar} in 44 BC.

The talk show hosts and news shows, except for the obnoxious conflicted “Chris Cuomo, CNN” are reveling in what is most likely one of the biggest news events of 2021, the downfall of Governor Andrew Cuomo. After securing an Emmy, lauding himself in a book and a year of brown-nosing by the media, the inevitable fall of the Emperor, finally seems to becoming to fruition. New York’s Nero is being noticed for what he is; a corrupt bully who only got where he is by virtue of his last name.

As tragic as the deaths of over 15,000 elderly in NYS-Nursing Homes have been, and as absurd as it may be that one of the biggest supporters of the #MeToo movement may turn out to a poster child for it, this is just the logical progression in Cuomo’s mad pursuit of power. He introduced new laws and legislation regarding sexual harassment in the workplace and now stands accused of the very trespass himself. These grievous Cuomo revelations are a reminder, however of who Andrew Cuomo was from the beginning.

NYS Health Commissioner Dr. Nirav Shah resigned on April 11 2014, one of the first and few Cuomo appointments to speak out with the truth about the thug who was their boss. Although Shah’s resignation was blamed on a failure to audit abortion clinics, it’s far more likely he was forced to leave as his health review of High Volume Hydraulic Fracturing was favorable toward Upstate landowners who sought to lease their land for natural gas development. Dr. Shaw himself talked about releasing his report many times, but was thwarted via Cuomo’s political maneuvering, just as Cuomo’s advisory just quietly stopped meeting.

Cuomo was, in fact, simply gauging the impacts on possible personal political scenarios; studying what impact any decision would have on his career over the science itself, as he sacrificed opportunities for individuals and communities to prosper. We’ve never had a governor as politically maniacal as Andrew Cuomo.

Would it not be just, both morally and statistically, in the light of Cuomo’s actions of recent, to revisit one of the most controversial decisions that affected so many more lives than any other decision made in Empire State political history?  Does not that decision, made by a man we now know to be the most corrupt and incompetent governor in our history, more treasonous than Benedict Arnold, deserve reexamination in light of the Cuomo revelations?

So many of us have, for years, recognized and witnessed the cancer of corruption emanating from the Governor himself. We have been righteously labeling the ban on our property rights to pursue natural gas development (natural gas farming, if you will), an unjust act based on false science and self political motivations.  Now, in light of the latest Cuomo revelations, I call for a full investigation into the ban on HVHF, and a reopen of the regulatory process known as State Environmental Quality Review of the same.

We have been pawns to the whimsical delusions of a corrupt deceitful Governor Cuomo. We demand justice now!