Andrew Cuomo has decided to be Santa for certain elite special interests out of Manhattan this Christmas, while playing Grinch to the Southern Tier.

Last night I had a vision of Andrew Cuomo peering down from Mount Albany on a small community in the Southern Tier. It was one of those small communities along the border with Pennsylvania, but I couldn’t tell which. It wasn’t much more than a crossroads but there was a country store and gas station, a church and a handful of houses and shops, surrounded by a combination of small and large farms, all showing signs of wear. Let’s just call it Amywhoville for lack of a better name.

The governor was dressed rather strangely, in costume garb that vaguely resembled a Christmas outfit. He also wore green makeup, (I told you it was a strange vision!) and his face was permanently contorted into a sneer not unlike the one on the Governor’s face when he screamed that “you don’t need 10 bullets to kill a deer” line to whip up support for New York’s anti-gun laws.

As he looked down on this little Southern Tier hamlet, the governor was uttering something like this:

“”PoohPooh to the Anywhos!”
“They’re finding out now that no Christmas is coming!”
“They’re just waking up! I know just what they’ll do!”
“Their mouths will hang open a minute or two,
Then the Anywhos down in Anywhoville will all cry BooHoo!”

By now, you know Anywhoville is really Whoville and we’re talking about The Grinch Who Stole Christmas. But, is it fair to compare Cuomo to the Grinch? Well, yes it is. 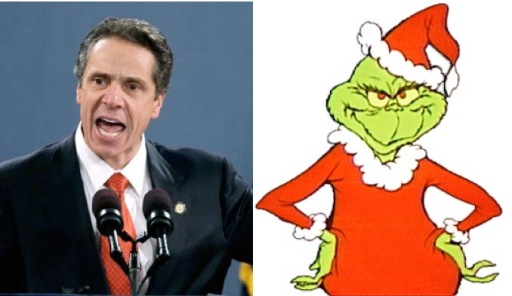 The decision to deny the Southern Tier any opportunity at fracking was, if nothing else, an act of vindictiveness. The governor clearly made his decision months ago, an event that probably precipitated the previous health commissioner’s resignation, but he waited until just before Christmas to announce it as a way of sending a message to voters he knew preferred someone else in his position,. the last people on earth he ever want to have the resources to oppose him in any meaningful way. His decision, therefore, had a certain logic – albeit a particularly mean-spirited and very Grinch-like one.

The real lesson of the Grinch That Stole Christmas, though, was what came next in the story:

“That’s a noise,” grinned the Grinch, “That I simply MUST hear!”
So he paused. And the Grinch put his hand to his ear.
And he did hear a sound rising over the snow.
It started in low. Then it started to grow.
But the sound wasn’t sad! Why, this sound sounded merry!
It couldn’t be so! But it WAS merry! VERY!
He stared down at Whoville! The Grinch popped his eyes!
Then he shook! What he saw was a shocking surprise!
Every Who down in Whoville, the tall and the small,
Was singing! Without any presents at all!
He HADN’T stopped Christmas from coming! IT CAME!
Somehow or other, it came just the same!

That is to say the spirit of Whoville is what counted. They would not denied by the Grinch and the Southern Tier cannot ultimately be denied by Cuomo if landowners and other residents continue to fight. The facts are incontrovertible and the economics will eventually mandate the resources be developed simply because they can be safely extracted and New York can’t afford to ignore the value in the ground.

The timing, however, is another matter. Cuomo loves playing the Grinch to the Southern Tier because it makes him look like Santa to Manhattan, while satiating his desire to punish rural landowners he knows don’t love him like Manhattanites do. He will reverse direction only if he’s forced to do so by the combination of a major lawsuit and grass roots campaign aimed at forcing his attention on the matter.

Some grass roots singing by the residents of all the Anywhovilles across the Southern Tier will begin on Monday, January 5, according to the Joint Landowners Coalition of New York (JLCNY). It will take place in the Holiday Inn in downtown Binghamton from 4:00-6:00 pm. Landowners are taking a page from the manual of the well-funded Alinskyites who say they got Cuomo to move their way by being everywhere:

Meanwhile, fracktivists were hounding Andrew Cuomo wherever he went in New York. They were relentless. Cuomo increasingly found that he simply could not appear in public anywhere in the state without a healthy contingent of anti-fracking protestors showing up to greet him.

The fractivists, though they are decidedly few in number, can do that sort of thing and make themselves heard, as Cuomo, our Grinch, acknowledged here. This is because, generally speaking, they don’t have the same work obligations as the residents of Anywhoville. But, the latter can make themselves heard, too, and need to start following Cuomo around the state doing the same thing in the same relentless fashion. It all starts on January 5 as the residents of a hundred Anywhovilles make noise in Binghamton loud enough to be heard on Mount Albany. Be there.

5 thoughts on “Cuomo: The Grinch Who Stole Southern Tier Opportunity”