New York electricity prices are now 26% higher than Pennsylvania’s and 44% higher than the U.S. average according to the Energy Information Administration.

New York residents, on average, pay 44% more for electricity than other states, 26% more than neighboring Pennsylvania and 40% more than Ohio. In January of this year, New Yorkers (and New York utility companies) were briefly forced to pay a record high of $140.25 per thousand cubic feet (Mcf) for natural gas, as opposed to what everyone else was paying (an average of $3.08/Mcf)—which is 46 times as much!

Both stats are rooted in the same issue: New York pays way more for energy than it has to, because Andrew Cuomo is blocking natural gas pipelines into the state from Pennsylvania. So says a new report titled “Pipelines and their Benefits to New York” (full copy below).

The report, published by the Consumer Energy Alliance, examines the benefits of pipelines to New York, highlighting the need for affordable energy supplies to keep the daily lives of families and businesses across New York moving. Without those pipelines, we’re toast. You can’t build windmills and solar farms fast enough to meet the demand for electricity and, by extension, natural gas. Cuomo’s dysfunctional energy policies are blocking all New Yorkers, upstate and downstate, from living even moderately prosperous lives.


Consumer Energy Alliance (CEA) today released a report titled “Pipelines and their Benefits to New York” at a breakfast discussion on the Future of Natural Gas and Economic Development in New York, hosted by New Yorkers for Affordable Energy. Faced with a new everyday reality of energy insecurity for many in the U.S., CEA’s report examines the benefits of pipelines to New York – specifically highlighting the need for affordable energy supplies to keep the daily lives of families and businesses across New York moving.

CEA’s report examines the benefits of pipelines, and the availability of fuels like natural gas, outside of the traditional scope of jobs and economic growth. That’s because CEA believes the benefits of pipelines should also be examined for their cost reductions and the critical service the energy they transport provides to New York’s families, small businesses and households – especially people living on the margins of society or even paycheck-to-paycheck.

Highlights from the report include:

“This report highlights the often-overlooked benefits New York’s communities are receiving because of the U.S. energy revolution, enhanced infrastructure, and pipelines,” Mike Butler, CEA’s Mid-Atlantic Director, said. “However, New York families, businesses, and households will not be able to realize the full potential of these benefits until natural gas plays a larger role in the state to offset intermittency issues and the physical realities of the state’s electric grid.”

“We believe in a balanced, constructive, all-of-the-above energy policy that utilizes all of our resources – conventional and renewable. CEA continues to urge policymakers in New York to embrace the benefits and growth potential that energy delivery brings to communities across the state. Everyone from working mothers trying to pay their bills, to small retailers who spend a large percentage of their revenue on electricity and meet their bottom lines – we all have a stake in making sure we meet our energy needs and it should be a top priority for our policymakers to ensure we do.” 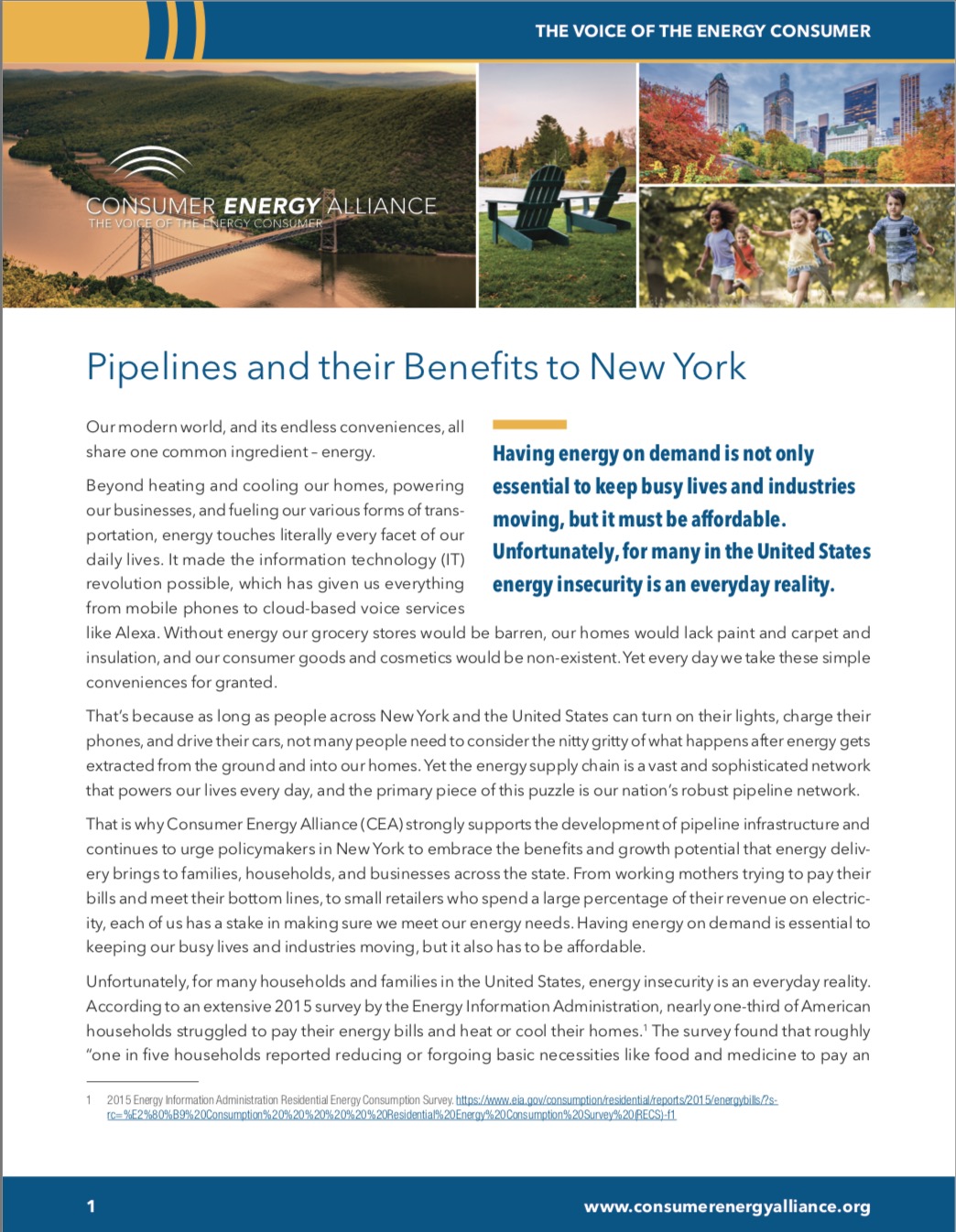