Bill McKibben’s 350 gang has been a Rockefeller deal from the start. Andy Cuomo fed the crocodile but his usefulness is over and it has turned on him.

Bill McKibben is always identified as the founder of 350.org, now often simply referred to as 350. The reality is that it’s a Rockefeller enterprise with a little help from the Park Foundation. Jay Halfon, the Fractivist Rasputin, is on the boards of not only 350 but also the Park and Sustainable Markets Foundation.

McKibben is simply a crafty figurehead who knows how to talk in circles and impress dunderheads; a great front man. He’s also always appealed to what some might naively call reason in a superficial preachy sort of a way, while encouraging a little violence on the side. Now, he’s dropping all pretense and going after Andrew Cuomo. Andy’s Rockefeller paymasters have turned on the guy. He tried feeding the crocodile with a fracking ban and pipeline kills but his usefulness is more or less over and the croc has now turned toward him. 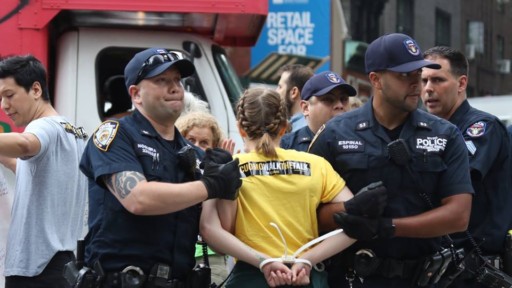 Photo from 350 site bragging about their arrests

All you need to do to understand what I’m talking about is to visit two websites brought to my attention by a regular reader. They’re both 350 sites. The official 350.org site is increasingly radical but it’s the gofossilfree.org site where things go full extremist and, especially so, at the New York chapter site. Check it out and you’ll find this (emphasis added):

In September, we shut down Third Avenue in front of Gov. Andrew Cuomo’s NYC office to send a clear message: we demand a Fossil Free New York. Here’s how you can join the fight. By, Lindsay Meiman, native New Yorker and US Communications Coordinator with 350.org…

That’s why on September 7, I once again put my body on the line to risk arrest and shut down Third Avenue outside Governor Cuomo’s office. In the absence of federal leadership, it’s up to our cities and states to step up to the plate with bold climate solutions. I took action because Governor Cuomo’s half-measures and lip service will lead to inevitable chaos and destruction for my generation and our future…

Today, we had our day in court, and the work ahead has never been more clear: New Yorkers need Governor Andrew Cuomo to walk the talk on climate, and take action at scale with the crisis. That means: (1) no fossil fuel projects, especially fracking infrastructure; (2) a just transition to 100% renewables; and (3) make corporate polluters and divest from fossil fuels.

New Yorkers know the destruction of climate change all too well. Six years after Superstorm Sandy too many of us are still recovering and rebuilding — while still vulnerable to inevitable future storms.

Governor Cuomo has said “you are what you build,” and we agree. Yet despite heeding the calls of New Yorkers to ban fracking and supporting our pension funds divesting from fossil fuels, Cuomo continues to allow fracked gas pipelines and power plants to wreak havoc on our communities. Under his watch, New York has less than 5% of our energy coming from safe and renewable sources like solar and wind. And despite opposing offshore drilling and investing in offshore wind, Cuomo has failed make climate justice a priority, allowing fossil fuel cronies to keep a stranglehold over our politics and economy…

Each one of us has a role to play in building a New York that works for all. The fight ahead in 2019 will require more escalation, more arrests, more picketing and more direct action to have our voices break through and get Cuomo to act.

This whole thing could be nothing more than political orchestration to give cover to Cuomo, but I suspect not. Bill McKibben and his fake 350 group have ramped things up in a way that tells me they know Corruptocrat’s usefulness is nearing an end and, so, they’ve turned on him and are in the process of making him the enemy.

He fed the croc by putting NRDC/Rockefeller gang member Joe Martens in as DEC Commissioner to kill fracking and faithfully following gang instructions to squelch pipeline projects. But, they know what they’re dealing with; a corrupt politician more interested in graft than their special interest politics and they’re not about to pay him. They’ll eat him instead.