A DRBC fracking ban seems to be in the works and members, employees or colluding partners couldn’t wait to release the news. What a corrupt enterprise!

It appears the rumors and my supposition were correct. The DRBC and/or its friends at the Riverkeeper, et al are leaking like a sieve and putting out the word the agency will announce tomorrow that it is pursuing a permanent ban. One of our fractivist commenters who writes under the obvious phony name of Alphege Hamilcar couldn’t wait to get onto to my site to gloat today and suggested looking at the DRBC website tomorrow.

This was followed by an AP announcement indicating this, in fact, is the plan. Interestingly, Tracy Carluccio, Deputy Povertykeeper, was right there for a comment, so perhaps she’s the leaker. Who knows? But, someone is leaking and if there were anything more needed to show what a corrupt agency this one is, this is it. 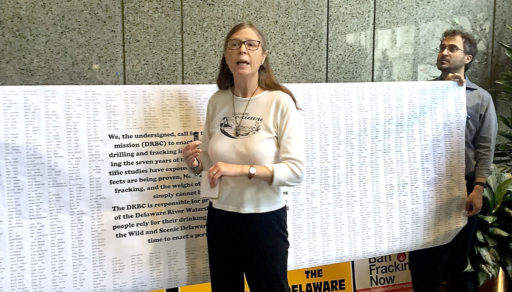 Tracy Carluccio – Deputy Povertykeeper. Is she the leaker of this news and, if so, how does she know?

Here’s is the key part of the AP announcement, obviously leaked by someone in the agency or colluding with it:

The Delaware River Basin Commission, a regulatory body that has representatives from New Jersey, New York, Pennsylvania, Delaware and the federal government, could vote as early as next week to begin the process of enacting a formal ban on gas drilling and hydraulic fracturing, according to a person with knowledge of the proposal. The person spoke Thursday on condition of anonymity because the plan is not scheduled to be made public until Friday.

We’ll find out tomorrow what “the process” is, but how did it get started? Where was the public meeting discussion leading up to this announcement? Why is it being leaked by the agency and/or its corrupt partners; all previously indebted to the same William Penn Foundation for funding?

Where would the authority for such a ban possibly arise?

What is the possible practical justification given the lack of impact on Susquehanna River quality? How could the Army Corps, Pennsylvania and New York possibly support their diametrically opposed positions on the DRBC and SRBC?

Why was it said that any reconsideration of drilling regulations would require another round of public hearings, but this is being proposed in the dead of night?

Most importantly, how is it that this announcement is coming as oral arguments are being scheduled in the next 60 days or so at the Third Circuit Court of Appeals on the Wayne Land and Mineral Group’s case against the DRBC? Is this nothing more than a legal maneuver intended to sideline that lawsuit or somehow put it in abeyance?

If so, as seems likely, this is extremely dirty pool for a public agency that has been telling the court all along that it has taken no position. Carol Collier and Steve Tambini both expressly so testified earlier in the case. Were they lying then or are they lying now? Either way, this is one corrupt enterprise doing the dirtiest possible work in the name of clean water it knows won’t be impacted one iota. Changing your story when you’re running scared of losing is not uncommon, of course, but this takes it to a whole new plane. It’s amazing how a lawsuit smokes out the truth isn’t it?

4 thoughts on “Corrupt DRBC Leaks Like A Sieve; Says Ban in the Works”