Some real science coming from Cornell University–who knew it was possible? Normally we associate the discredited theories of professors Robert Howarth and Anthony Ingraffea with the storied Cornell. They claim burning coal is better for the environment than burning natural gas. It took a grad student at Cornell to conduct some real, fundamental, in-the-field research that will benefit Marcellus and Utica Shale drilling–IF it ever happens in New York.

Doctoral student Lauren McPhillips is the lead author of a research paper recently published in the Journal of Hydrology: Regional Studies. The study is titled “Assessing dissolved methane patterns in central New York groundwater.” McPhillips and her fellow researchers recorded the chemicals found in 113 water wells in Chenango County, NY, to serve as a baseline when/if widespread shale drilling comes to the county. 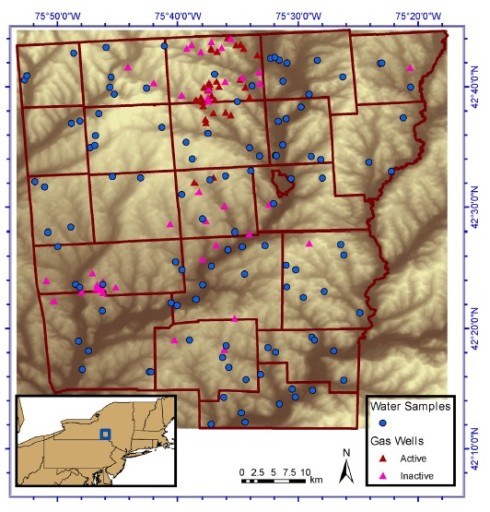 The research shows that there is some methane in water supplies in Chenango County, but none of the wells have levels exceeding federal guidelines. The chemical composition of the water in each well was measured and recorded and will serve as a baseline with which to compare future samples–when and if drilling takes place.

We applaud this effort. Chenango County is one of five likely counties to see Marcellus and/or Utica drilling when Gov. Cuomo finally makes up his mind to allow drilling. We applaud real scientists who go out in the field and conduct surveys and take samples–rather than crunch a bunch of numbers in spreadsheets from “research” actually done by others. 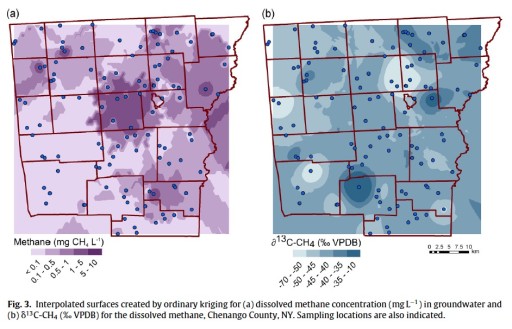 Here’s the conclusion of the published research report (emphasis added):

With the potential for unconventional technology (high-volume hydraulic fracturing of horizontal wells) being used to access Marcellus Shale gas resources in New York State, it is important to gather baseline information on water quality before this contentious technology is implemented. In this study in central New York State, we analyzed 113 groundwater samples from across Chenango County for dissolved methane and a suite of cations and anions. Most measured dissolved solids were below federal drinking-water standards and no methane concentrations exceeded recommended action levels. The majority of methane samples exhibited a mixed isotopic signature based on analysis of 13C-CH4. When examining possible environmental drivers of the methane patterns, methane was not significantly correlated to proximity to gas wells, location in valleys, or the geohydrologic unit in which wells were finished. Statistical analysis of geochemical data revealed that significantly higher methane concentrations were found in groundwater classified as sodium-chloride, sodium-bicarbonate-chloride, and sodium-bicarbonate, which likely resulted from interactions with surrounding or underlying bedrock and long residence times. Multivariate regression models of dissolved methane concentrations revealed hardness, barium, and sodium to be the best predictors of observed methane patterns, further emphasizing the connection between dissolved methane and hydrogeology.

That about says it all, doesn’t it? Methane is a natural condition and it’s important to do baseline testing before drilling to quantify it and be prepared. Who knew?

One thought on “Cornell Discovers Methane Migration Is Natural”