The Constitution Pipeline asks FERC to rehear their challenge of NYS-DEC’s denial of water quality certification even as it pursues other remedies.

Contrary to stories begin spun by anti-fossil fuel groups, Williams has not given up the fight to build the Constitution Pipeline, a $683 million, 124-mile pipeline from Susquehanna County, PA to Schoharie County, NY to move Marcellus gas into New York State and from there, into New England. The pipeline faces stiff odds. 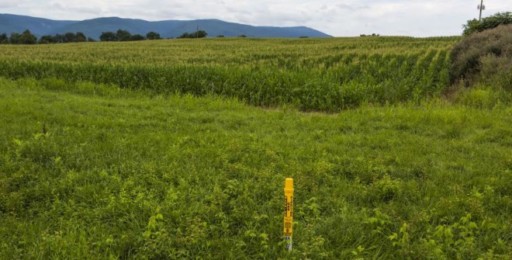 Yesterday Williams launched another legal attack by asking FERC to reconsider their denial from last month. If FERC says yes and overrules the DEC, we have victory. If FERC says no, Williams will then (we are assuming) use the denial as the basis to take the case back to federal court–this time to the D.C. Court of Appeals.

The first federal court to consider the matter (ruling against Williams) was the Second Court of Appeals (in NY). Moving the case to the D.C. court stands a better chance. So, three potential paths to victory: U.S. Supreme Court, FERC changes its mind, or the D.C. Court of Appeals. This fight is far from over.

A consortium behind the proposed Constitution natural gas pipeline from Pennsylvania to New York asked U.S. federal energy regulators on Monday to review their order related to a water quality permit that had been denied for the project.

The Federal Energy Regulatory Commission (FERC) on Jan. 11 rejected the request by Constitution Pipeline, a consortium headed by Williams Cos, to overturn New York’s denial of the water permit.

“New York failed to act within ‘a reasonable period of time’ on Constitution’s application,” Constitution said in a statement.

If built, the 125-mile (201-km) pipeline would transport 0.65 billion cubic feet per day of shale gas. New York uses on average about 3.6 bcfd of gas, and one bcfd is enough to fuel about 5 million U.S. homes.

Officials at Williams could not immediately say what the latest cost estimate was for the project. The company said it would take about 10 to 12 months to build the pipeline after receiving necessary approvals.

When Williams proposed building Constitution in 2013, it estimated it would cost about $683 million and enter service in 2016. The delays, however, have boosted that estimate to as high as $875 million, according to upstate New York newspapers.

The New York Department of Environmental Conservation denied Constitution’s application in 2016, saying the company failed to provide sufficient information to determine whether the project would comply with the state’s water quality standards.

Constitution appealed the New York denial to a federal appeals court, but the court last year upheld the state decision. The company in January petitioned the U.S. Supreme Court to review the appeal court’s ruling. 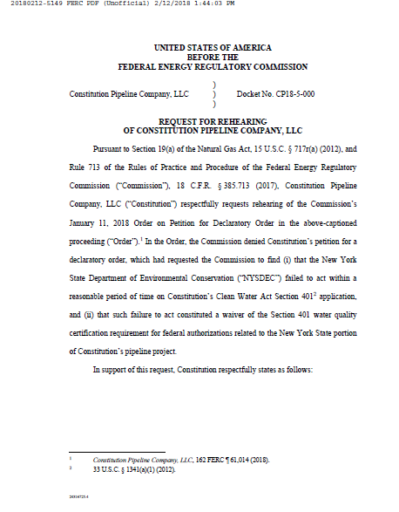 Click to read the full Williams’ request to FERC

Editor’s Note: Readers puzzled by the unusual headline to this post should research the Battle of Bastogne and General McAuliffe’s famous reply to the German demand for surrender of American troops. My father-in-law, Edward A. O’Neill was part of the force that rescued Bastogne. It was among his most precious memories and stories of the war in which he served.