Nick DeIuliis continues to impress as he lays out CNX plans for adroitly positioning the company’s capital by being “ruthlessly rational.”

Yesterday, CNX released its own YouTube video and updated PowerPoint slide deck to tell investors about the advantages of merging in CNX Midstream, and to make the case that CNX is unlike other Marcellus/Utica drillers. Different how? With four advantages over their competitors. CEO Nick DeIuliis says in the video that his company:

DeIuliis said the company is also an “astute capital allocator” looking to invest their free cash flow “in the right places at the right time” to boost the share price for investors.

CNX Resources Corp. may not be the biggest natural gas driller in southwestern Pennsylvania nor the largest independent natural gas producer in the United States, as two of its locally based competitors can claim. But the Southpointe-based CNX is making a pitch to investors that said that it isn’t playing the same game as their bigger competitors.

CNX (NYSE: CNX) released an 8-minute video called “The Opportunity is Now” on YouTube with its CEO, Nicholas J. DeIuliis and CFO Don Rush. They walked investors through the natural gas producer’s playbook, which coupled the seven-year plan the company unveiled earlier this year during the Covid-19 uncertainty with CNX’s strong focus on being a low-cost producer and its ownership of gathering pipelines as well as the pro-natural gas and pro-manufacturing stance espoused by DeIuliis in recent months.

And, for good measure, it flowed the entire strategy through a famous quote from investor Warren Buffett.

It’s that Buffett term — the “economic moat” — that could appeal to the Wall Street investor, which has largely shield away from the oil and gas sector as commodity prices plummeted to near record lows even after hundreds of billions of dollars of investment in developing the natural gas in the Marcellus, Utica and other domestic shale regions.

“CNX Resources is poised to generate substantial free cash flow over the next seven years, as you’ll see,” DeIuliis said. “How are we able to do that? We have a competitive moat that boils down to four competitive advantages.”

Those four advantages, according to DeIuliis: Having low costs to produce natural gas compared to peer companies; hedging natural gas prices to lock in the best prices; owning gathering pipelines and other infrastructure instead of having to pay a third party; and the low capital required for CNX’s strategic plan.

DeIuliis said CNX was “ruthlessly rational” in capital allocation decisions and wouldn’t chase what its other peers were doing.

CNX has $2.1 billion market capitalization and an operating margin of 27%, with an estimated $425 million in free cash flow for 2021. Its share price rose 5.4% to $9.80 a share on Monday after the release of the video; it has traded between $4.26 and $14.19 over the past 52 weeks. A graphic CNX presented said the company was in the 90th percentile among the S&P 1500 index and 93rd in the S&P 400 Mid Cap companies for free cash flow yield and in the mid-80s percentile in operating margin as well.

Rush also expanded on CNX’s use of Buffett’s investing philosophy.

“We want our investors to know our competitive moats are real and they are sustainable for an extended period of time,” Rush said. “It would take our competitors well over a decade and cost them several billion dollars to replicate our business model.”

Key to the strategy is owning pipeline systems, which Rush noted was rare among Appalachian E&P companies. This comes at an opportune time for CNX, which Sept. 28 announced it had completed the merger with CNX Midstream Partners LP (NYSE: CNXM), the master limited partnership of pipeline and other infrastructure assets. CNX has long held that having those under control is beneficial.

“Our competitors have outsourced theirs to third parties, which results in high fixed operating costs and constant contractual disputes with minimal negotiating leverage,” Rush said.

Looks like CNX is doing the right things. The consensus among the nine analysts that track the stock is that it’s time to buy CNX:

CNX Resources Corporation found using ticker (CNX) now have 9 analysts in total covering the stock. The consensus rating is ‘Buy’. The target price ranges between 17 and 11 with the average target price sitting at 13.67. Now with the previous closing price of 9.32 this indicates there is a potential upside of 46.7%. The day 50 moving average is 10.77 and the 200 day moving average is 9.82. The company has a market capitalisation of $2,088m. Find out more information at: http://www.cnx.com 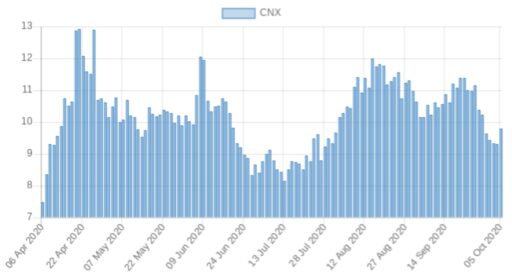