CNG vehicles have inherent advantages over electrics that are encouraging fleet use but Bob Tomaine says CNG personal transportation is likely to follow.

UGI Utilities recently opened its second compressed natural gas fueling facility, this one in Wilkes-Barre, Pennsylvania. The move is significant beyond the obvious fact that CNG as a vehicle fuel serves as a viable alternative to gasoline or diesel by cutting emissions and strengthening energy independence.

Further benefits might not be as easily seen, but they’re very real and will go far toward ensuring competitiveness in the real-world market, a point made a few days ago, when a friend sent a link to a photo of an electric BMW plugged into what appears to be a charging station powered by a diesel generator. To an automotive writer, this seemed interesting at the very least and a quick search turned up a series of photos showing electric vehicles being charged from generators of various types. 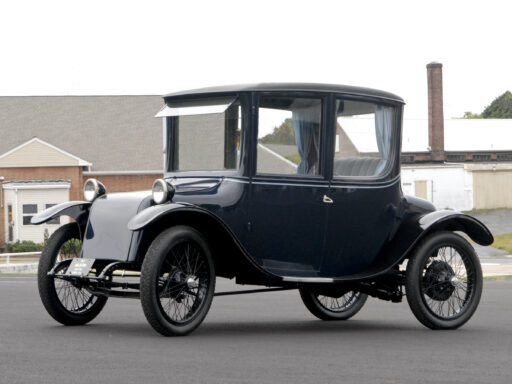 A 1921 Milburn is representative of the electric cars that were available a century ago. It cost $2,685 – more than $37,000 in today’s dollars – and its listing in that year’s National Automobile Chamber of Commerce Handbook claims a maximum speed of 25 miles per hour, but doesn’t give a range. (The Milburn is in the collection of the Boyertown Museum of Historic Vehicles in Boyertown, Pennsylvania.)

In a narrowly practical sense, every charge is a good charge for an electric vehicle since limited range has always been the electric’s weakness. Obviously, any vehicle powered by any energy source has a limited range, but the critical difference is infrastructure; a gasoline- or diesel-powered vehicle can be refueled almost anywhere and almost instantly. That’s the advantage that all but killed electric cars well before World War II. The electric has attempted comebacks and relatively speaking, some have been more successful than have others.

At first glance, the lack of significant range, the still-sparse network of charging facilities and the inability to charge as quickly as a gasoline or diesel car can refuel might appear to be offset by the electric’s low operating cost and total lack of pollution. The low operating costs are somewhat artificial, though, thanks to the difference in taxes that have gone along with electrics and the no-pollution factor is a feel-good plus in the electric’s column, but it’s not quite that simple; even a cursory look at the big picture reveals that there’s a difference between emissions and pollution. While its tailpipe is nonexistent, the electric is not pollution-free.

The range problem has sort of been solved by hybrids, but at the cost of dependence on a gasoline engine, so the idea of plugging an electric into a diesel-powered charging station or toting a portable generator amounts to an ad hoc hybrid that retains the old disadvantage of a time-consuming charge. Various utilities have at various times used electric vehicles for short-run work and that’s a logical move since they can easily charge them, but their efforts haven’t spurred many others to follow and have thus disappointed their supporters.

Some electrics that seemingly had promise in the commercial world ultimately faded away, but the idea of using them to stimulate interest was a good one and in a modified and updated form, the same idea can be applied to vehicles powered by compressed natural gas today.

Unlike the mostly less-than-successful demonstration projects that didn’t result in widespread commercial adoption of electric cars and trucks, CNG’s value as a vehicle fuel has been recognized well enough that northeastern Pennsylvania has already seen fleets making the switch. Several were represented at the UGI facility’s opening.

While those transitions might look like little more than jumping on a bandwagon comparable to the one that proponents of electrics have long hoped for, that’s not what’s happening. CNG vehicles have pluses that electrics would be hard-pressed to meet. Granted that neither fueling stations nor charging stations are today on every corner, extending range – if necessary – via a larger tank is more doable than adding batteries or carrying a portable generator. And in business, where time really is money, fueling is far faster than charging.
That’s why vehicles powered by compressed natural gas will work in the commercial world and as their numbers increase, CNG-fueled personal transportation will follow.