A recent article about reasons people deny global warming are extremist climate rhetoric that simply don’t hold up when they are examined with common sense.

The environmental activists, political lobbyists, major media, biases academics, and self-righteous foundations have spent the last 50 years using climate rhetoric to attempt to convince the world we have a climate crisis of biblical proportions. It is said large and oil companies spend “$200 million a year to control, delay, or block binding climate policy.”

While “$200 million” seems like an exaggerated number for a group of companies who rarely have the same interests on any of the contentious oil and gas issues, I would argue that billion and billions of dollars are spent by Environmental NGOs, foundations, state and Federal agencies on blocking new and upgraded oil and gas infrastructure. 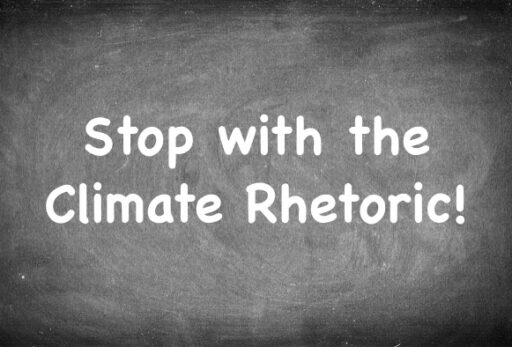 Said differently, this motley group of environmental activists have used the legal system, politics, major and social media, uncivil disobedience, and biased scholarship to ensure that nothing relating to energy gets build or upgraded.

Protests, school strikes, state and national governments, international groups, and major media are lobbying for the world to “Keep it in the Ground” and stop economic development for the 1/3 of the world’s people who are living in some form of poverty and the 1 billion people who are living without clean water and adequate live giving energy.

Each of the above “deniers” denials is based on one or more overriding premises.

While I disagree at length with every one of the denials mentioned by Mr. Maslin, I will be more poetic, rather than adopting his extended prose.

No, science will never be settled, especially given the four-dimensional complexity of the terrestrial, atmospheric, and extra-terrestrial science and its interactions;

The humanitarian benefits have been life expectancy has improved from 69.9 to 72.6 in last decade and from 59.7 to 72.6 since 1976 and thanks to the Internet of Everything health care and medical innovation will advance;

The current world political situation has no international body capable of directing economic or political life into the future with any credibility, think the European Union or the United Nations. In particular, the level of clean water availability globally has increased from 76% in 1990 to 91% to 2016: And, the decline in deaths from extreme weather, storms, droughts, or floods ha declined 99% in the last century;

The history of crisis engulfing the world, while still as volatile as in Shakespeare’s time, are nowhere as many catastrophic events as World War 1, World War 2, the Korean War, or even Vietnam NAM.

In short, the claims of five Climate Denials are greatly exaggerated by a big city bureaucratic prejudice, a paucity of understanding of rural and third world life, a significant lack of historical details, a pessimistic, static future devoid of human innovations, and ultimately, the vast uncertainty of an unknowable future. The climate rhetoric isn’t selling.