New York’s new Climate Leadership and Community Protection Act was probably hatched in Albany “fireplaces” and it should be returned to one for disposal.

The ornate Senate chamber has a richly carved golden oak dome ceiling with deep “pockets” or recesses creating an acoustically perfect chamber for debate. At the back of the chamber, there are two large fireplaces, each with openings six feet high. Originally used as sources of heat, they soon lost their purpose as more modern methods of heating the building evolved.

As the old saying goes, politics is like sausage-making, you really don’t want to know how things get done. As those fireplaces were no longer needed for heat, they were soon discovered to be perfect alcove-like retreats serving as quiet meeting places for Senators to step into and discuss their issues without being overheard in the main chamber. 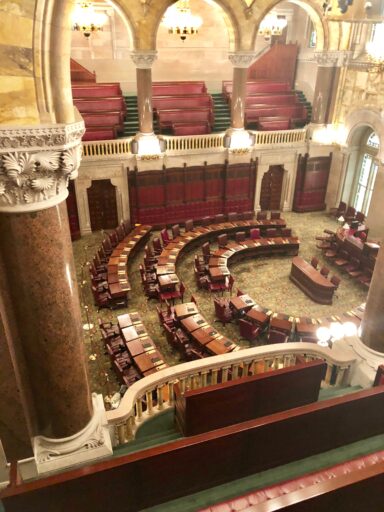 This legislative year, which just ended, was going to be the year the State would legalize marijuana. Since the Democrats control all three branches of State government, it should have been relatively easy. Complete legalization did not pass, but at the last moment decriminalization did. Penalties for possession of pot are now reduced to a violation with a fine similar to a parking ticket.

In another bill hammered out in the fireplaces, New York recently passed the Climate Leadership and Community Protection Act requiring the State to reduce global warming emissions to virtually nothing. 70 percent of the State’s electricity must come from renewable sources by 2030 and shift to an entirely [emphasis added] carbon-free power by 2040. Governor Andrew Cuomo has vowed to sign the bill.

Conventional natural gas and fuel oil furnaces would be banned, along with gasoline-powered cars, trucks, motorcycles, etc. No natural gas stoves for cooking, no wood fireplaces, not even charcoal briquette grills would be allowed. Even the tradition of coming together and toasting marshmallows over an open campfire could become a thing of the past.

Supporters say the mandates will require a huge workforce to swap out furnaces, install solar panels, build wind farms and other infrastructure. “This new law will spur the growth of green jobs across the State for decades,” said Julie Tighe, the president of the New York League of Conservation Voters.

Nothing was ever mentioned regarding the expected costs, not only of replacing all fossil fuel devices, but also the complete redesign and rebuild of the entire electricity grid. Upstate residents will be up in arms as our scenic green hills and the Finger Lakes region are devastated by a ubiquitous electricity grid crisscrossing the countryside primarily for the benefit of downstaters.

Business groups justly call the bill unworkable and potentially disastrous for companies such as Corning Glass and many others.

“New Yorkers are going to pay a lot for their electricity because of this bill,” said Gavin Donohue, the president of the Independent Power Producers of New York. “There’s no doubt about that.” He added while the State’s bill had “some laudable goals,” there were not “a lot of details on how to get there.”

The New York director of the National Federation of Independent Business, Greg Biryla, said “There doesn’t appear to be a fiscal impact Statement for something that aims to completely reinvent our State’s economy,” adding it would inevitably lead to companies migrating elsewhere. “This just makes other States that much more attractive for investment.” (1)
In a recent radio interview, Mr. Cuomo called the negotiated bill “the most aggressive climate change program in the United States of America, period.” Yet, just a few weeks before, the Governor said that he had doubts about climate legislation that “put forward goals and dates that we cannot make.”

How this senseless bill passed into law is not at all clear. Perhaps the explanation lies in the blue smoke wafting out of those Senate fireplace chimneys, the newly decriminalized kind. “Care for another toke Senator?