Last week the U.S. House Climate Crisis Committee released their majority staff report purporting to solve climate change.  The report is packed full of buzzwords, but the core message is clear: more expensive energy.  While the environmental movement has long been clear about their goals of increasing energy costs in order to force citizens to use less, the political drawbacks of such a message led most Democrats to keep that part under wraps.  With this climate crisis report, though, the mask is off. 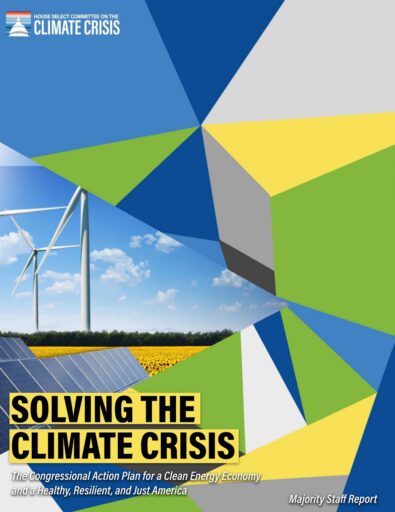 The policy report includes just about every expensive climate crisis proposal you’ve ever heard of: net-zero CO2 emissions from electricity, all vehicles zero-emission by 2035, a carbon tax, massive spending on new transmission lines, more subsidies for wind, solar and electric vehicles (EVs), national renewables mandates, ending oil and gas production on federal lands, and on and on for hundreds of pages.  It is not so much a considered list of policy ideas as a laundry list of everything that came to mind.  No green legislation left behind.

One thing you won’t find mention of in this report is cost.  These are all very expensive proposals.  A University of Chicago study last year estimated that state renewable electricity mandates increased electricity rates by about 17%, this report would impose a national mandate more stringent than current state mandates.

A recent estimate is $125 billion in investment needed by 2030 for utilities to cope with current anticipated EV demand growth, this report would mandate far more EVs than that estimate contemplates.  Solar and wind tax credits already cost taxpayers billions of dollars a year, this report would extend and expand subsidies.

A carbon tax would make every single good more expensive.  The costs are almost incalculable: between higher energy costs, higher costs for goods, and higher government spending, there are many trillions of dollars in costs in this policy report.  Probably why the report does not even make a pretend effort to calculate them.

These costs are not paid for by “the rich” or by “corporations.”  Ultimately individual taxpayers and consumers pay these costs.  The costs of renewable mandates and building new transmission lines are not paid by the utilities, all those costs are passed through to ratepayers.  EV mandates don’t come out of the auto companies’ pockets, every car is made more expensive.

A carbon tax is not paid by big companies, they pass the cost on to their customers by raising prices.  Government spending and subsidies ultimately have to come from taxpayer wallets, or be borrowed from their children’s future.  The cumulative proposals in this policy report would impoverish Americans even as they damage the economy.

This policy report was written without input from the Republicans on the committee, and it shows.  None of these proposals are bipartisan, nor is any of this going to pass a Republican directed Senate.  But this partisanship does set up a very clear divide for voters concerned about energy.

This climate report is the Democratic Party road map for energy policy when they next take power.  Democrats in moderate districts or representing energy-producing States may talk out of one side of their mouth to sound reasonable and pragmatic, but fundamentally this climate policy report is what you are supporting when you vote for a Democrat for Congress.

Pennsylvania Rep. Conor Lamb, Texas Rep. Lizzie Fletcher and others may represent traditional energy-producing districts, but they support Nancy Pelosi in Washington, and this policy report is Nancy Pelosi’s road map.  When voting in November, this radical and wildly expensive policy report cannot be ignored.