[Editor Comment: The CLCPA climate legislation is a reprehensible piece of politically correct legislation of no practicality with big impacts on NYers.]

On July 18, 2019, Governor Cuomo signed into law the Climate Leadership and Community Protection Act (CLCPA).  It is among the most ambitious climate laws in the world and requires New York to reduce economy-wide greenhouse gas emissions 40 percent by 2030 and no less than 85 percent by 2050 from 1990 levels.  I maintain that not only is the general public unaware of the ramifications of this legislation but I doubt that very few of the legislators who voted and sponsored it understood that provisions in this law will require draconian limitations on the use of fossil fueled appliances very soon.

I am following the implementation of the CLCPA closely because its implementation affects my future as a New Yorker.  Given the cost impacts for other jurisdictions that have implemented renewable energy resources to meet targets at much less stringent levels, I am convinced that the costs in New York will be enormous and my analyses have supported that concern.  In addition, I think that the CLCPA’s mandate to electrify home heating will be deadly when an ice storm knocks out power for days.  The opinions expressed in this post do not reflect the position of any of my previous employers or any other company I have been associated with, these comments are mine alone. 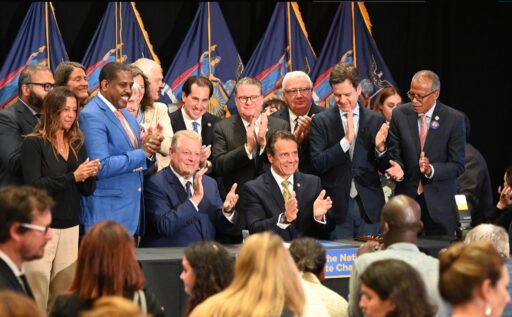 Cuomo signing the CLCPA, which will result in untold major ramifications on ratepayers, taxpayers and all consumers. How long before the self-congratulatory clapping of hands turns to finger-pointing recriminations for having forced homeowners to replace their furnaces and/or endure outrageous electric rates.

The CLCPA establishes an implementation schedule for compliance with its targets.  One year after the effective date of the law, the CLCPA mandates that the Department of Environmental Conservation (DEC) establish the 2030 and 2050 statewide emission limits (Part 496) and that the Climate Action Council (CAC) be organized and start meeting.  DEC has proposed the emission limits and the CAC has been meeting since early this year albeit they just have started meeting regularly.

The CAC has another year after the effective date of the law to develop a scoping plan that will outline a plan to meet the limits. After a year’s review the CAC submits the final scoping plan to the Governor.  Four years after the effective date of the law the DEC is required to promulgate regulations implementing the scoping plan recommendations.  I document the CLCPA specifics of the timeline requirements in the rest of this section.

Section § 75-0103 in the CLCPA establishes the New York CAC. The CAC is charged with planning responsibility:

“The council shall on or before two years of the effective date of this article, prepare and approve a scoping plan outlining the recommendations for attaining the statewide greenhouse gas emissions limits in accordance with the schedule established in section 75-0107 of this article, and for the reduction of emissions beyond eighty-five percent, net zero emissions in all sectors of the economy, which shall inform the state energy planning board’s adoption of a state energy plan in accordance with section 6-104 of the energy law. The first state energy plan issued subsequent to completion of the scoping plan required by this section shall incorporate the recommendations of the council. “

It goes on to state that:

On or before three years of the effective date of this article, the council shall submit the final scoping plan to the governor, the speaker of the assembly and the temporary president of the senate and post such plan on its website.

No later than one year after the effective date of this article, the department shall, pursuant to rules and regulations promulgated after at least one public hearing, establish a statewide greenhouse gas emissions limit as a percentage of 1990 emissions, as estimated pursuant to section 75-0105 of this article, as follows:

No later than four years after the effective date of this article, the department, after public workshops and consultation with the council, the environmental justice advisory group, and the climate justice working group established pursuant to section 75-0111 of this article, representatives of regulated entities, community organizations, environmental groups, health professionals, labor unions, municipal corporations, trade associations and other stakeholders, shall, after no less than two public hearings, promulgate rules and regulations to ensure compliance with the statewide emissions reduction limits and work with other state agencies and authorities to promulgate regulations required by section eight of the chapter of the laws of two thousand nineteen that added this article.

Because New York has dramatically reduced CO2 emissions I thought that it would be difficult but not impossible to meet the ambitious goal of a 40% reduction in emissions by 2030. The CLCPA includes specific emissions inventory requirements that differ greatly from the assumptions used in previous New York inventories.  As a result, the CLCPA Part 496 inventory is nearly double the previous inventories.  The question is what level of emissions reductions from each sector will be needed to meet the CLCPA inventory that increases the effect of methane.

The 2030 emissions limit is based on a percentage reduction from 1990 so the first information needed is the emissions in 1990.  The proposed Part 496 regulation includes an inventory of 1990 emissions as shown in the Part 496 Total Statewide GHG Emissions in 1990 table.  This table consolidates tables in the Part 496 Regulatory Impact Statement (RIS) to provide as much detail as possible on the components of the emissions.  Part 496 establishes the statewide emission limit for 2030 as 240.83 million of metric tons of carbon dioxide equivalent (MMtCO2e) gas as a 40% reduction from the total 1990 emissions of 401.38 MMtCO2e.

New York has yet to release a more recent update of GHG emissions using the new methodology so we don’t know the level of effort needed to meet the 2030 limit.  In order to make a projection of what will be needed to make the 2030 limit, we need a detailed current annual inventory as well as the activity data and emission factors.  That is not available at this time so I am forced to use an estimate of the emissions from another source and fuel use from other sources to make my estimate.

The Climate Action Council is required to prepare a scoping document over the next couple of years that will outline how each sector could meet the CLCPA targets.  The 2030 target is a single number representing a 40% reduction of 1990 emissions.  Reductions will be easier in some sectors and more difficult in others so we can expect that some sectors will reduce more than 40% and others less.  For the purposes of this exercise I want to estimate what will be required if the each of the three sectors  has to meet the 40% goal on its own.

In the absence of “official” CLCPA annual inventories I can use other data to make an estimate of the current state of emissions.  Howarth (2020) includes a table that lists estimates for CO2 and CH4 for both 1990 and 2015 for all the coal, petroleum and natural gas combusted in New York State.  Unfortunately, it does not provide sectorial information. I assume that those emissions include the upstream emissions required by the CLCPA.

The New York State Energy Research and Development Authority (NYSERDA) Patterns and Trends document lists the total amount of coal, petroleum and natural gas combusted in the state as a whole and for each of the three sectors.  I combined these two data sources and calculated the sector emissions in 1990 and 2015 by assuming that the sector emissions equal the emissions from all sectors multiplied by the residential fuel burned divided by the fuel burned by all sectors.

Given the crude approach there is no sense trying to get sophisticated estimating what will be needed necessary to get the reductions needed to meet the 2030 limits.  The electricity sector needs a more involved estimate but we can get some idea of the scale of the task looking at the residential and transportation sectors.

“To meet the CLCPA 2030 target of a 40% emissions decrease will require a focus on greatly reducing the use of natural gas in the residential and commercial sector and petroleum products in transportation. To date, the State has focused little attention on GHG emissions from these sectors, and has instead prioritized reducing the use of fossil fuels to produce electricity.”

He goes on to claim:

“Electrification of heating (ground- and air-sourced heat pumps) and transportation (electric vehicles) provides a pathway to meeting the GHG-reduction mandates of the CLCPA (Jacobson et al. 2013). Heat pumps extract energy from the environment, allowing the delivery of far more heat energy than the electrical energy used to power the pumps.  As a result, converting from the use of natural gas to a modern heat pump will reduce GHG emissions even if the heat pump is powered by electricity generated from fossil fuels (Hong and Howarth 2016).”

In order to determine the GHG emissions reductions necessary from the complete residential sector we would have to determine how many homes have gas stoves, hot water heaters and furnaces.  In this example I will only consider heating.  The NYS Occupied Housing Units by Type of Space Heating Fuel table is an excerpt from the 2001-2015 Patterns and Trends document Appendix D-1.

Roughly speaking about half the over 6 million housing units currently burning natural gas, bottled tank or LP gas, and fuel oil or kerosene will have to convert to electricity before 2030 to meet the 46% target.  According to the internet, the average service life of a gas furnace is about 15 years.  If that is true then it won’t be enough to require installation of a heat pump furnace when a gas furnace dies.  Instead somehow, some way, furnaces with useful life will have to be replaced.

In order to determine the GHG emissions reductions necessary from the transportation sector we have to determine how many vehicles are registered in New York.  According to the Department of Motor Vehicles there were about 9.4 million NYS vehicle registrations on file in 2016. In order to meet the CLCPA target 4.3 million vehicles will have to have no GHG emissions presumably by replacement with electric vehicles.  According to NYSERDA’s electric vehicle registration website as of August 2, 2020 there are 53,859 electric vehicles on the road.

My biggest problem with the CLCPA is that the authors, sponsors, and politicians who voted to approve the law presumed that their political will was sufficient to make it work.  I maintain that a feasibility study to determine technical practicability, implementation logistics and cost is a necessary first step because no jurisdiction anywhere has successfully implemented a similar energy transition.

The projection numbers for the residential and transportation sectors speak for themselves.  I cannot imagine any way that the State can meet the 2030 40% reduction in GHG emissions CLCPA target without extraordinary regulatory reach into the homes and cars of every New Yorker.  It is time for all New Yorkers to wake up to the potential ramifications of this law.